The American Bobtail is a relatively new breed that’s already making an impact due to its wild appearance and delightful personality. Renowned for their short tails, their fans quickly realized there’s even more to love about the American Bobtail after spending some time with this intriguing companion. This unique cat breed is loving, smart, and so adorable you’ll just want to hold them forever!

The American Bobtail’s most distinctive trait — its short tail — results from a natural genetic mutation. Though this mutation has appeared worldwide for centuries, breeders didn’t capitalize on the unique look until the 1960s. That’s when John and Brenda Sanders adopted a short-tailed kitten while on vacation in Arizona and named him Yodi.

When Yodi bred with Sanders’ female cat Mishi, they had kittens with short tails. This proved that the short tail mutation was a dominant trait. With the help of an experienced Persian breeder, Mindy Schultz, the couple bred the kittens with other short-tailed cats from all over the United States and Canada.

The non-pedigree cats they chose for breeding were often larger and more wild-looking. There’s a rumor that one Florida breeder crossed the domestic cats with Bobcats, but experts say this would lead to sterile kittens.

The American Bobtail has a personality to match its feral looks! They are known to catch insects right out of the air if one crosses their path. They also love to stalk their toys and then carry them in their mouths as if showing off a hunting trophy.

Highly intelligent and energetic, American Bobtails also love to play games. Many owners recall playing fetch or hide and seek for hours. Sometimes their intelligence and curiosity can get them into a bit of trouble. They’re known to get into things quite easy — and out of things, too.

But despite their wild streak, the American Bobtail is known to be a very loving cat breed that loves to relax on your lap, soaking in attention and pets. Many people compare American Bobtails to dogs since they will excitedly greet you at the door when you come home. They are a favorite amongst RVers and truckers for their adaptable nature and easy-going attitudes.

The American Bobtail is a sturdy and strong breed defined by its muscular and athletic appearance. Generations of selective breeding refined the Bobtail and made it into the powerful cat it is today.

There’s also the tail, of course. According to the CFA, there isn’t a preferred tail length, and no two tails are the same. Their distinctive tail is very expressive, visible above their back when the Bobtail is alert. The tail can be straight, slightly curved, and even have bumps along its length.

The American Bobtail is a slow-maturing breed that takes up to three years to reach its adult size. They are a medium-sized cat that weighs between 7-16 on average. The males are often larger than females. But both sexes of American Bobtail possess a moderately long and muscular body, with a full, broad chest and prominent shoulder blades. 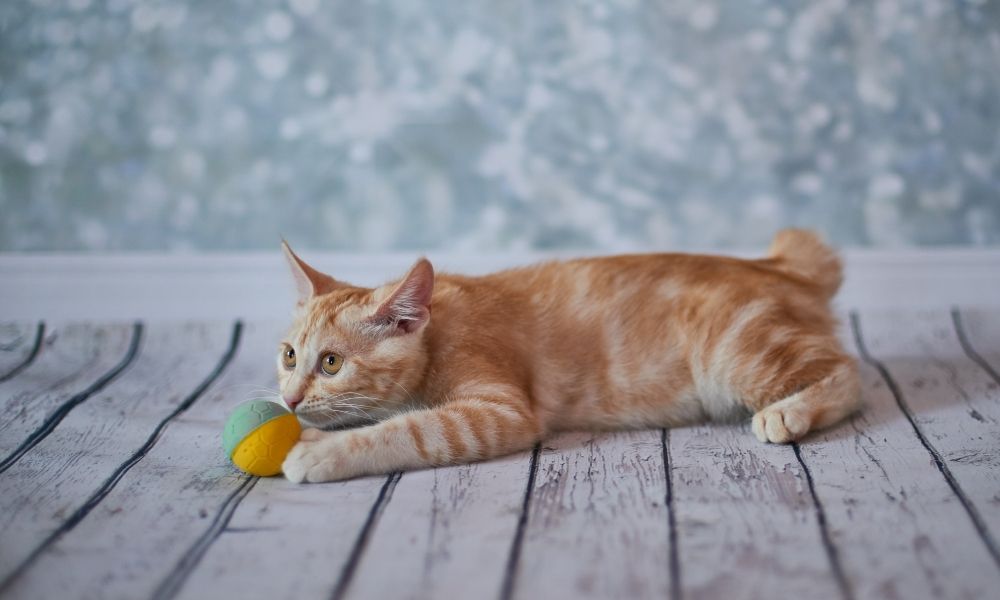 American Bobtails have a well-defined, medium-length muzzle and a strong chin. Their equally strong brow and large eyes give them an alert appearance. The CFA defines their gaze as “naturally haunting.”

The American Bobtail’s large almond-shaped eyes can come in any color. It usually correlates with their coat pattern. Their eye can range from orange, yellow, and brown to green and blue.

Their ears are upright with slightly rounded tips. Ear tipping is very desirable since it gives them a more wild appearance. Any characteristics that resemble that of a bobtailed wildcat will win points with CFA judges.

The American Bobtail has long, muscular legs to go along with its broad body. Their paws are big and round. Longer-haired varieties will have toe tufts. This breed has have five toes in the front and four on their hind legs.

The American Bobtail comes in two coat varieties. The shorthair version has a semi-dense medium coat. The topcoat is hard, with a soft, downy undercoat. The longhair variety is described as “shaggy” by the Cat Fanciers Association. Their coat texture is non-matting and resilient.

With the right lifestyle and healthcare, they can live to be 13 to 15 years on average.

While the American Bobtail has a non-matting coat, it doesn’t hurt to brush your cat twice a week to remove dead hair. Regular brushing will keep their coat shiny and healthy, as well as reduce the amount of shedding. Try using a curry or slicker brush for their fur. You should also trim their nails and clean their ears weekly.

Even though American Bobtails are hearty breeds with a wildcat appearance, we often recommend that you keep them indoors. This ensures that they don’t get diseases spread by other cats, get attacked by dogs or wild animals, or get hit by a car.

You also avoid the risk of someone catnapping your American Bobtail since their unique, bobbed tail can be quite desirable. Keeping them indoors also keeps the local ecosystem safe since American Bobtails frequently catch birds and rodents.

To keep your American Bobtail preoccupied indoors, try providing them with an abundance of puzzle toys. This will give them something fun to figure out, keeping them away from your cabinets and closet doors. And if you do want to take your American Bobtail outdoors, you’re in luck — they’re known to love being on a leash!

The American Bobtail is a very healthy breed with no known inherited diseases. Even though they don’t have any known genetic predisposition to health problems, there are some things you should always do for any of your cats to ensure they are healthy and happy. Always vaccinate your cat to protect them from viral diseases and take them to the vet for regular checkups. 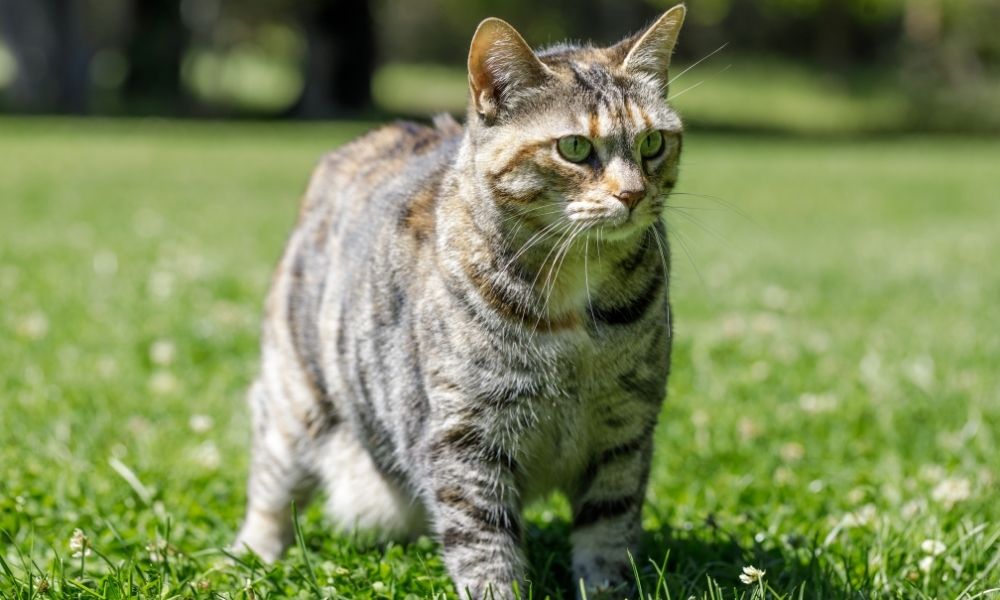 One common disease that plagues almost all cat breeds is hip dysplasia. This can lead to crippling pain and arthritis of the hip joints if not treated properly. This is why it’s essential to bring your cat to scheduled appointments — you can catch this disease early and manage it to avoid further complications.

American Bobtails can be born without tails. They are sometimes called “Rumpies.” While there isn’t much research into this condition, Rumpies are considered not acceptable for breeding because of the possible health problems associated with their shortened spine.

American Bobtail cats need quality cat food with beneficial ingredients. Always look for a protein source, as well as taurine. All domestic cat breeds need taurine in their food since they don’t produce this vital amino acid on their own.

Always check the cat food label to see how much your cat should eat each day based on their weight and lifestyle. American Bobtails are a bit of a larger and heavier breed, but you should still make sure they are within a healthy weight range.

When it comes to treats, stick to an all-natural brand and make sure the amount of treats they’re given doesn’t exceed 10% of their daily caloric intake. Some cat treats are also great for your cat’s dental health, helping them avoid plaque build-ups.

Friendly and outgoing, the American Bobtail is known to get along with all family members, two-legged or four. While you’ll need to introduce new pets to your Bobtail slowly, they will ultimately end up enjoying the company, whether it’s playing with other cats and dogs or cuddling with them.

They are also known to be good with children. They love to play, so children are constantly entertained by the American Bobtail’s antics. But always make sure you’re supervising your children while they interact with the American Bobtail to avoid tail-pulling and roughhousing.

Sometimes this breed can be a little wary of strangers. But once you gain their trust, the American Bobtail is all cuddles and games.

The American Bobtail is known for being a quiet kitty. Instead of meowing, American Bobtail owners notice that their cat likes to chirp, trill, and click. This is just another thing that makes them quirky and unique.

In 2015, the CFA listed the American Bobtail as the 37th most popular cat in the United States out of over 40 recognized cat breeds. It’s a newer breed that’s slowly gaining popularity, but the country’s fascination with this breed comes with a price tag. The American Bobtail can be expensive — sometimes qualified breeders will sell them for over a thousand dollars! That’s because they are still quite rare.

But as more and more people become aware of the American Bobtail, it will undoubtedly climb up the cat breed ranks. This short-tailed feline is an active and friendly domestic cat with an irresistibly wild appearance.