When people think “cat with folded ears,” they usually think of the Scottish Fold. But did you know there’s another cat breed that also sports cute, curly ears? Let us introduce the American Curl!

This breed is unique because of its curled ears. But people who get to know this cat realize there’s a lot more to them than the curls! They are loyal, energetic, and young at heart. This cat adds life to your home, whether it’s cuddling on the couch or playing under the covers while you make the bed.

The American Curl is a relatively new breed. It originated in 1981 when two cats with curled ears appeared on the doorsteps of Joe and Grace Ruga in Lakewood, California.

One of the unique cats passed away, but the couple named the other Shulamith. A longhaired female, she became a beloved member of the family. Joe and Grace became curious about her peculiar ears, but they couldn’t find any breed that matched her description.

In December 1981, Shulamith had four kittens. Two of the babies had curled ears despite the father lacking the unique genetic mutation.

It soon became clear that the curled ear gene was dominant, meaning only one parent needed the trait to pass it on to its offspring. Shulamith had more litters, creating more curly-eared cats. Soon, there were curly cats with long hair, short hair, and various colors and patterns.

A woman named Nancy Kiester acquired two of the kittens. She was fascinated not only with their curled ears but their easygoing nature. She realized the cat was separate from the Scottish Fold and pushed for them to become a breed of their own.

It isn’t only the American Curl’s ears that make this cat quirky. The Curl is an affectionate yet easygoing breed that loves finding ways to become involved with whatever you’re doing.

They will roll around on the keyboard when you try to type. Or sit in front of the television when you’ve been lounging on the couch for a while. Sometimes the Curl will even try to find their way into the shower when you’re in there!

This loyal cat is very focused on its family. American Curls are often called “dog-like” because of their affection for the humans in their life.

Sometimes, the American Curl is called the “Peter Pan of cats” because they remain kitten-like well into adulthood. They have an energetic and fun personality, and they are always open to playing. American Curls like to chase toys down the hall or flip and jump for ribbons you shake above them. 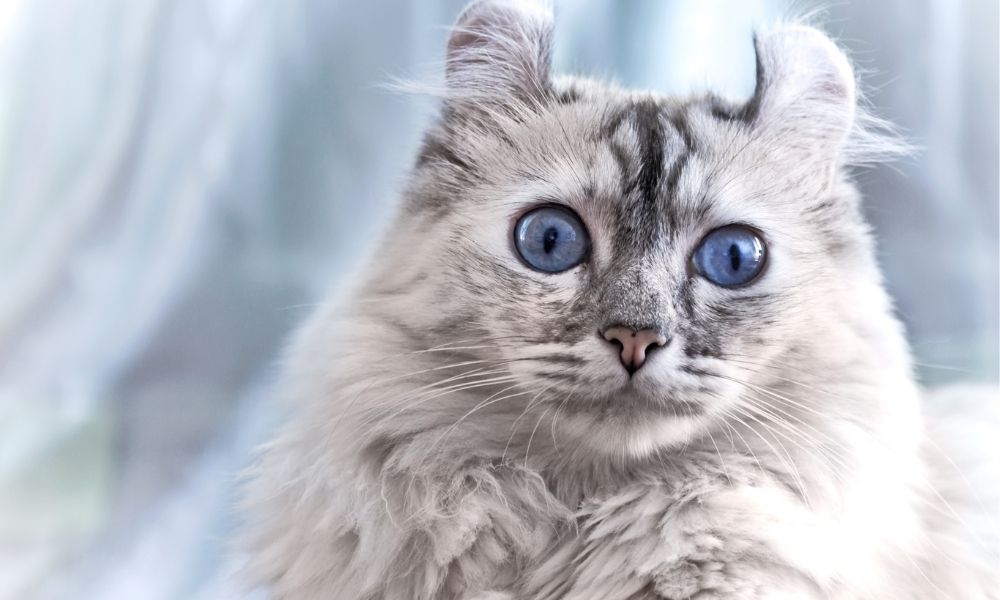 American Curls are undoubtedly one of the cutest kitties on the block. With long hair, large eyes, and trademark ears, this is one breed that turns heads wherever it goes.

The American Curl is a medium-sized cat that weighs around 10 pounds. Their body is moderate in strength and muscle tone, a bit long in appearance. Their flexible tail is wide at the base and equal to their body length.

The Cat Fanciers’ Association (CFA) describes the American Curl’s head as a “modified wedge.” Their forehead has a gentle curve, while their nose is straight and their chin is firm.

The American Curl has walnut-shaped, oval eyes. They are large, clear, and brilliant. The eyes can be any color, and they do not correspond with their coat color.

What stands out the most about the American Curl is its ears. They sit at a 90-degree arc, curled backward in a smooth crescent. They sit erect on top of their head, giving the breed an alert and friendly appearance.

This breed has medium-length legs that are proportionate to its body. They are straight with medium boning. Their paws are also medium, often appearing round.

The American Curl can have either long or short hair. The short-haired variety has a minimal undercoat and soft, silky fur that lays flat. The look, feel, and length of their fur carries to their tail.

The long-haired version of the American Curl has fine, silky fur that also lays flat. They also have a minimal undercoat. Their tail is full and plumed.

This breed comes in numerous colors and patterns. Popular colors include white, black, red, blue, cream, chocolate, and lilac. When it comes to patterns, they can be tabby, tortoiseshell, calico, lynx point, and flame point.

With proper treatment and regular vet visits, the American Curl can live 13 years or more.

Since the American Curl has very little undercoat (whether long or shorthaired), their fur is easy to manage. Even longhair cats are unlikely to get tangles or matting.

Keep their coat looking shiny and healthy by combing them weekly. Brushing also eliminates excessive shedding and possible hairballs, especially in warmer months when they shed more. If they are shedding more than usual, try brushing them daily to get rid of excess fur.

Brush your American Curl’s teeth daily to prevent periodontal disease. If you can’t manage to get a toothbrush in your kitty’s mouth every day, we still recommend brushing their teeth weekly. You can also trim their nails every couple of weeks, especially if they’ve started using your couch as a nail trimmer.

Check your American Curl’s ears weekly to make sure there’s no dirt buildup. If you need to clean their ears, you can use a vet-approved wipe or soft tissue. Using a damp cloth and a mixture that’s half cider vinegar and half warm water can also help.

You should keep your American Curl indoors. Their unique look could easily attract cat thieves. Cats that are let outside are also susceptible to predators, dogs, feral cats, traffic, as well as ticks and fleas.

American Curl cats are generally healthy. However, adequate diet, exercise, and regular veterinary visits are essential to every cat’s life. Here are some common health issues that the American Curl may face. 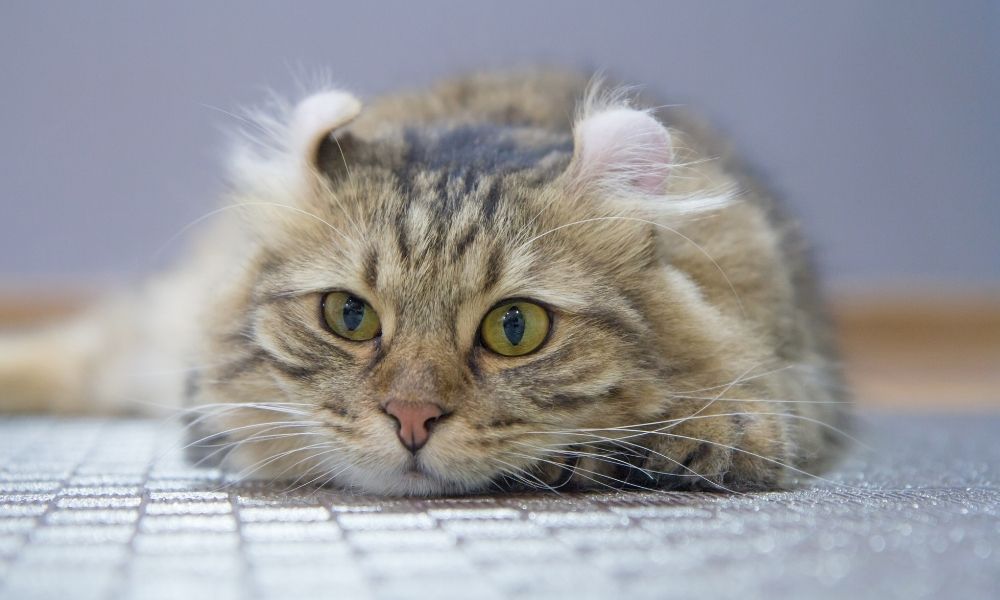 One thing people may be concerned about is the breed’s unique ears, which are curled backward. While this is not deemed dangerous by the CFA, some American Curl kittens can be born with narrowed ear canals. A narrowed ear canal can trap wax and lead to ear infections. This makes ear checking and cleaning even more important for this breed.

Progressive retinal atrophy (PRA) is a degenerative condition that affects the photoreceptor cells in your cat’s eyes. As the cells die, your cat begins to lose its vision. Unfortunately, there is no treatment or cure for PRA.

The American Curl is healthiest when they eat a high-quality diet. Look for dry food that has protein as its first ingredient. Chicken, salmon, and turkey are all good sources of protein. High-quality food should also have taurine, an amino acid that keeps cats healthy and active.

Avoid food with carbohydrates since these “fillers” are unhealthy. They can also cause obesity and allergies. You may even consider wet food if you’re looking for food with fewer carbs.

If you want to go the extra mile for your American Curl, you can always give them CBD cat treats. These treats help soothe your cat and promote balance within their body. And with a delicious salmon flavor, all-natural organic ingredients, and not a single preservative, your kitty won’t be able to resist them!

The American Curl is great around other pets! According to the CFA, the American Curl has “respect” for other animals in the house, giving them their space. When introduced properly, they get along with other cats. They also enjoy a canine companion since they’re both high energy and playful.

Their nature makes them great playmates for children as well. Just make sure you keep an eye on younger children when they play with American Curls to ensure they don’t pull their tails or hurt their ears.

American Curl kittens may look perfectly “normal” at birth. They are born with their ears straight! At three to five days old, the kittens’ ears will start to curl back. They won’t permanently be curled until the kitten is around 16 weeks. Around this age, breeders can determine if the kitten’s ears make them more suited for families or cat shows.

Adopting an American Curl costs around $1,000. While they are pricey when purchased from trusted breeders, the American Curl is most definitely worth it.

Their ears may be what first caught your attention — but the American Curl’s personality makes them one of the most fulfilling cats to have as part of your family. Loyal, playful, quirky, and fun, the American Curl is an excellent addition to any home.