The American Shorthair is a working cat that originated in barns, tasked with hunting rodents, bugs, and other pets. But Americans soon realized how loving and easygoing these cats were and brought them into their homes as companions.

The American Shorthair has become one of the most popular breeds in the United States. This is thanks to their gentle, social personality and distinct, bold looks. Don’t get this cat confused with an everyday domestic housecat! There are several unique traits to look for when adopting an American Shorthair. We’ll cover everything you need to know about this classic feline — their history, care, traits, and more!

Settlers coming to North America from Europe in the 1500s brought along “working cats” prized for their rat-catching abilities. Before that, America had no domestic cats or indigenous species for them to develop from. The first British colony in the New World, Jamestown, was home to these colony cats.

In 1965, the distinct cat was named the “American Shorthair,” abbreviated ASH. This title gave the cat even more recognition. That same year, the Cat Fanciers’ Association named a silver tabby male Best Cat in Show. This award gave the “All American” cat breed even more respect.

Today, the American Shorthair is no longer associated with the random-bred cats found in barns and streets all over America. They are one of the most popular shorthaired breeds in the region. Bold, big, and loyal, the ASH has become the quintessential American cat breed.

The American Shorthair cat has the perfect, balanced temperament. This is a social cat that loves being around its family but might not enjoy being snuggled or picked up. Instead, they will crawl onto your lap for a relaxing hangout.

This is not a cat that will get in your face or ever demand attention. Instead, the quiet-voiced American Shorthair will hang out when the time seems right. If you’re too busy, this cat will find ways to amuse themselves. This is usually playing with elastics, pens, and other items you’ve left lying around for them to find.

The American Shorthair isn’t very energetic, but they also aren’t completely lazy. They are down for a good play session with their family, but aren’t as hyperactive as other breeds. You won’t find them racing up the curtains or running continuously down the hallway most of the time. Instead, the American Shorthair will usually simulate hunting by chasing down their toys when the mood strikes.

This easygoing breed is easy to train. They will quickly learn what’s right and wrong. An independent cat, the American Shorthair might continue to do some naughty things behind your back. But, they will listen when told not to jump on counters or scratch the couch.

While they started out as a rat-hunting street cat, selective breeding has turned the ASH into a magnificent breed with specific standards. 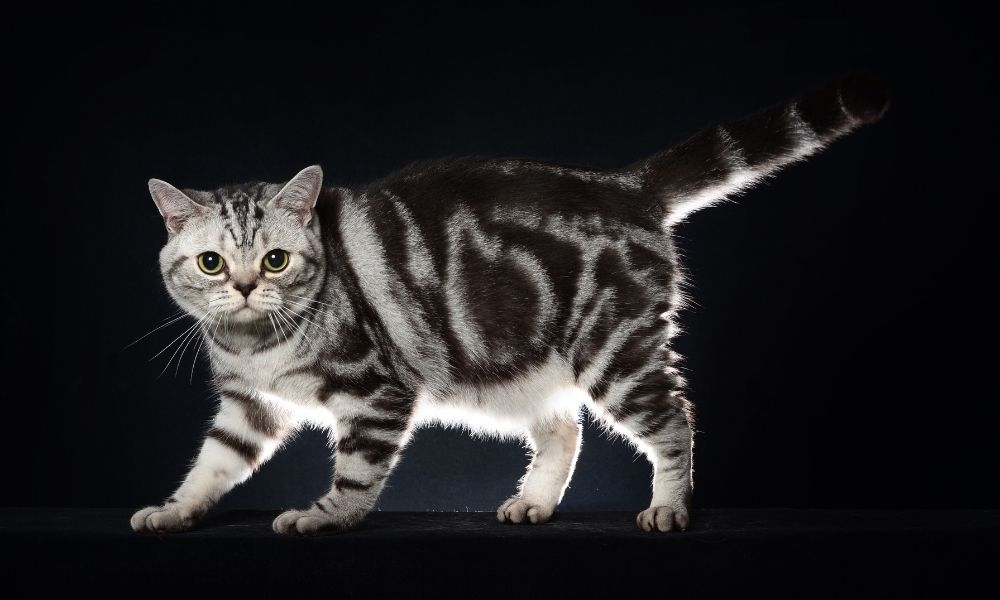 This is a medium-sized cat breed that’s often 11 to 15 pounds. Like the British Shorthair, they are solidly built, with powerful, muscular bodies. Their shoulders, chest, and hindquarters are well-developed, giving them a broad and level appearance. The ASH’s tail is heavy at the base and medium in length.

According to the Cat Fanciers’ Association, the ASH has a large, full-cheeked face with a “sweet, open expression.” Their nose has a gentle curve from the bridge to the forehead.

Their forehead is smooth. There’s no dome between the ears, which are medium and slightly rounded. Altogether, this gives the American Shorthair a round, teddy bear-like appearance.

No color is specified, but the American Shorthair cat should have “bright, clear, and alert” eyes. The color of the ASH’s eyes is determined by their coat color. They are most often gold or green.

The outer corner of their eyes is slightly higher than the inner corner, with large and wide upper lids and fully rounded lower lids.

The American Shorthair has muscular, medium-length legs. All four legs are straight, and their paws are full and rounded with heavy pads.

The American Shorthair’s coat is short, thick, and dense. Their thick fur helped protect them from moisture and cold in their hunting days. The Cat Fanciers’ Association even describes their coat as “hard” in texture.

This breed comes in several color and pattern varieties. They can be solid, shaded, smoke, parti-color, bicolor, tuxedo color, tortoiseshell, calico, van, tabby, and tabby with white. Each of these coat patterns can come in various colors as well.

American Shorthair cats are generally healthy. Of course, they still carry a few hereditary diseases as well as complications common to all domestic cats.

Hypertrophic cardiomyopathy, or heart muscle disease, occurs when the heart muscle thickens. This can make it harder for your cat to breathe. Be on the lookout for rapid breathing and lethargy. Many cat breeds are tested for this disease, so always talk to breeders about their testing and health guarantees before adopting.

FLUTD is an umbrella term — it can refer to many different conditions that affect a cat’s urinary tract. This includes bladder stones, urolithiasis, and urinary tract infections. Look for changes in your cat’s litter box behavior. If they are urinating on cool surfaces (like tile or in the bathtub), have blood in their urine, or are having difficulty urinating, they may have a FLUTD.

This disease was first recognized in Persians but is also common in other breeds, like the American Shorthair. Kittens are born with small cysts in their kidneys, which grow over time. You’ll start to notice signs of PKD around seven years of age.

Symptoms of PKD include weight loss, dehydration, and vomiting. While there’s no cure, vets can provide support and treatment. Again, breeders should be aware of PKD and not breed cats that carry this disease. 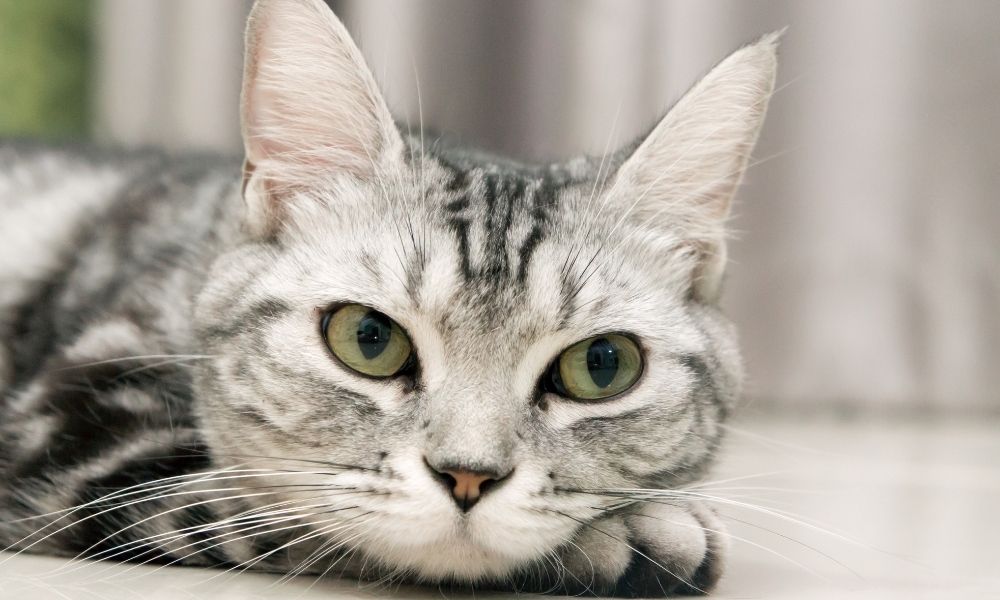 Provide a ton of toys for your American Shorthair. This will allow them to still enjoy a good hunt without damaging the neighborhood’s animal population. Get them the best cat toys with different textures, like crinkly mice and feathered fish — and spray them with CBD catnip spray! But also consider interactive or motion censored toys that give them even more satisfaction when they pounce on them.

American Shorthairs have a history of hunting. They first came to North America to hunt rats and protect crops from pests. They naturally love hunting, but this breed should be kept indoors.

The American Shorthair is easy to care for! Their short coat never mats or tangles. Simply brush them once a week to remove excess dead fur. This will cut down on shedding and hairballs.

Check your ASH’s ears for wax and dirt buildup. Gently remove anything you see with a vet-approved wipe. Look between their toes for dirt, clipping their claws if they get too long. Brush your cat’s teeth every day to keep them healthy and avoid dental complications.

The American Shorthair is known to gain weight faster than other breeds. To prevent weight gain, make sure to never overfeed your ASH. Make sure you give them the specified amount of food on the side of the bag. It’s best to spread meals throughout the day using an automatic feeder.

You want to avoid cat food that’s heavy in carbohydrates, including wheat and corn. These ingredients are often called “fillers” because cats don’t need them in their diet. In fact, fillers often make cats overweight or allergic to their food.

The American Shorthair requires a high-quality cat food brand that has meat as the first ingredient. Note that this ingredient doesn’t include “meal” in the name. It should be turkey, chicken, salmon, or other protein sources. This is a highly active breed that needs plenty of protein and fat in its diet.

A healthy alternative is wet food. Canned food has fewer carbohydrates. Instead, it contains over 70% water. Wet food is a great way to give your cat the liquids they need to ensure they don’t become dehydrated.

The American Shorthair is an adaptable and hardy cat breed that doesn’t mind new pets in the home. Make sure to introduce your cats properly, which often includes keeping them apart until they are used to each other’s scents.

When they get used to each other’s presence, you can introduce cats slowly. Once they trust each other, your ASH will quickly become fond of this new feline companion. Don’t be surprised if you see them cuddling together on top of the cat tree!

The American Shorthair is also fine with dogs and other pets. Just make sure to supervise interactions and ensure no pet gets hurt. The ASH is quite gentle and might get taken advantage of by a more aggressive dog.

But their place in American history didn’t end in the 1600s. An American Shorthair was actually a member of the White House during George Bush’s presidency. The black cat was named India, and he lived in the White House for eight years!

American Shorthairs are an All-American cat breed that has become one of the most popular felines in North America. But that isn’t just because of their American history. You can blame their lovable personality, hardy nature, easygoing attitude, and playful demeanor. This independent cat offers tons of love!