Have you always been drawn to Persian cats but don’t want to deal with long coats and excessive shedding? The Exotic Shorthair Cat is probably the cat breed for you!

Exotic Shorthair cats are essentially the same as Persian cats, except one breed has short fur — can you guess which? Despite its lack of fluff, the Exotic Shorthair makes up for it with a loving personality, calm demeanor, and a surprisingly playful side that the Persian sometimes lacks. Find out why so many people love Exotics and why you should consider getting one today!

The Exotic Shorthair is a relatively new breed. Their parent breed, the Persian, is far more ancient, dating back to around 1684 B.C. Over time, Persian cats spread throughout Europe in the 1800s, becoming favorites amongst the royalty and wealthy.

Breeder and Cat Fanciers’ Association judge Jane Martinke is often credited with continuing the breeder’s efforts, helping the breed become recognized by the CFA in 1967.

Within just a few years, an Exotic Shorthair achieved grand champion status in 1971. By this time, the breed had gained quite a following already. Today, they are considered one of the most popular short-haired cat breeds.

By 1987, the CFA didn’t allow any outcrosses or outbreeding to the Exotic Shorthair except for Persians to keep the breed pure. 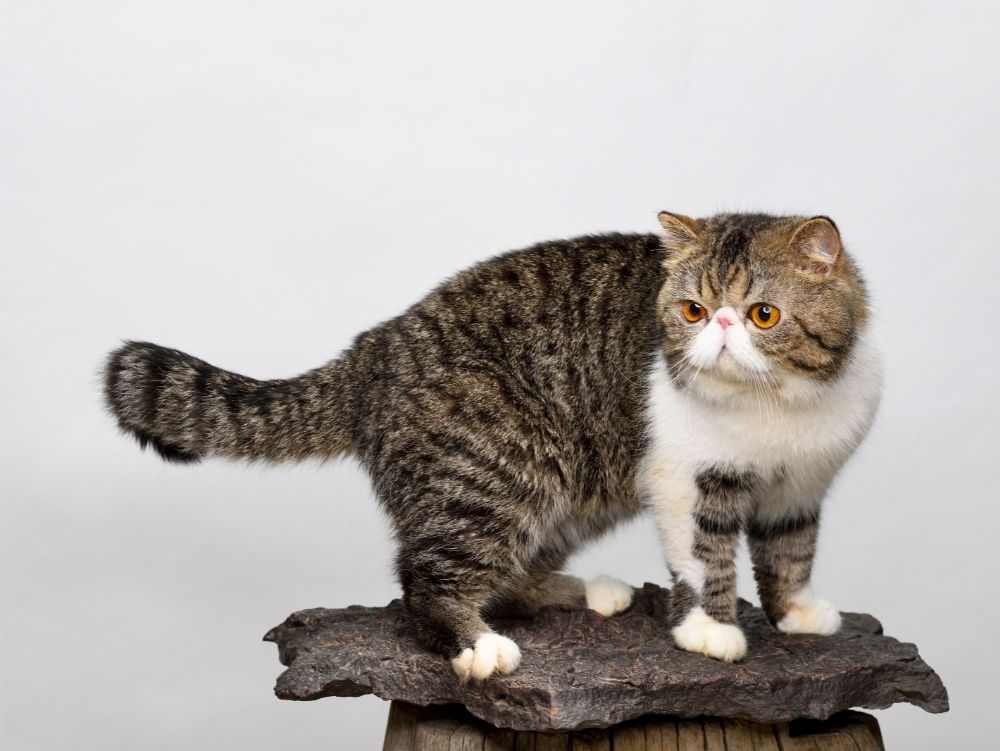 While Exotic Shorthair fans debate which breeds their personality more resembles, there’s no denying that this is one social cat. Exotics love being around their family, especially whichever human they deem their favorite. They’ll quietly follow them from room to room, piquing their curiosity about whatever activity is going on.

Exotic Shorthairs also love cuddles! They are a breed that will curl up on your lap, lick you, and ask to be carried — anything to be with you!

Despite being very social, Exotics aren’t too demanding. They’ll cuddle and hang out with you when called, but they won’t be too clingy or in-your-face about needing attention.

The Exotic Shorthair is also known for being very quiet. They’re not a vocal cat, and the CFA states that their voices are “seldom heard.”

While the Exotic is more playful than the Persian, they’re still a bit of a lug. During random bursts of energy, the Exotic will show off, chasing after a toy or jumping after a ribbon until they’re exhausted. Sometimes they’ll even dig around for the toy after you put it away, hoping to continue their play session.

Other times, they prefer to sit back and watch the toy move, swatting at it here and there. They love a good playtime, but you won’t find the Exotic Shorthair energetically zooming around the house, looking for things to get into like more active breeds.

Like the Persian, the Exotic Shorthair is a medium-sized breed with an uncharacteristically large head. In fact, their head may appear even larger since they don’t have the excessive fluff to fill out the rest of their body. The Exotic’s facial features are like their long-haired counterparts with a flat, snubbed nose and big, friendly eyes.

The Exotic Shorthair weighs around 12 pounds and can reach up to 15 inches tall. Even without the fur, the Exotic Shorthair’s body is round and heavily boned with a broad, deep chest, big shoulders, and a good-sized rump.

Their “round and massive” head is known around the world for its prominent eyes and flat nose. Their chunky head sits atop a short, thick neck.

The Exotic Shorthair’s eyes are described as “brilliant in color” by the Cat Fanciers’ Association (CFA). Just like the Persian cat, their eye color will often correlate with their coat pattern. White Exotic Shorthairs will have dark blue eyes, and other patterns will have a brilliant copper color.

The Exotic Shorthair has short legs that are thick and strong in appearance. Their paws are large and round to match, five toes carried close in the front and four on the back legs.

Much like the Persian, the Exotic Shorthair can come in a large assortment of colors and coat patterns. Here’s a closer look at some of the divisions recognized by the Cat Fanciers’ Association.

With proper care and a trusted veterinarian, Exotic Shorthairs can typically live around 15 years old.

The main difference between Persians and Exotic Shorthairs is the coat length. Families often choose the Exotic because they still have the distinct facial characteristics and lovable personality of a Persian without the need for extensive daily brushing.

Some people call Exotics the “Lazy Man’s Persian” because they require far less brushing, at around once a week. Still, regular grooming helps avoid excessive shedding and hairballs.

What hasn’t changed, though, is their unique face. Their flat nose and big eyes bring on some challenges of their own, even without fur. Exotic Shorthairs will often get a discharge in the folds of their face, making them appear dirty. You can use vet-approved wipes or warm, soft cloths to wipe the tears and dirt away.

You should usually keep Exotic Shorthair indoors. Since their snubbed nose makes it harder to breathe, they cannot run as long or as fast as most cats. This makes them susceptible to predators, strays, dogs, and cars. Make sure your Exotic also has a shallow cat bowl to accommodate for their facial structure as well. 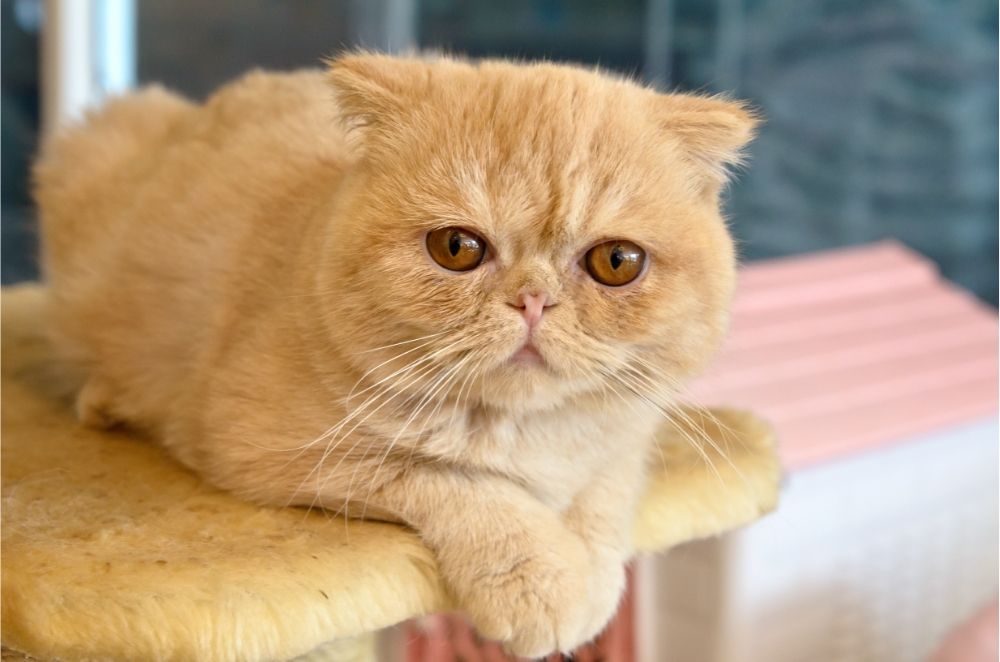 Although most Exotic Shorthairs are pretty healthy, these adorable felines don’t come without a few hereditary health issues. Remember always to take your cat to the vet for regular checkups! Here are some conditions owners should be aware of:

Because of their flat faces, Exotics can suffer from BOAS. This condition means that their nose and teeth are displaced due to their extreme look.

This issue leads to difficulty breathing, cat dental care problems, and poor sinus drainage. Weight loss and surgery can help ease their suffering, as well as keeping them indoors and away from humid weather.

Another common illness for Exotic Shorthairs is feline polycystic kidney disease. PKD is a life-altering, inherited condition that can lead to kidney failure.

Kittens affected by PKD start to develop cysts on their kidneys at just a few weeks of age. Symptoms will often appear before six months of age. It’s imperative to only buy an Exotic Shorthair from a trusted, responsible breeder who knows the litter’s health history.

Exotic Shorthairs also love to eat. However, their love for food can often lead to obesity, which can cause many health problems for a stockier breed like the Exotic Shorthair. It’s essential to make sure that you aren’t overfeeding your big-eyed beggar.

You can implement an automatic feeder that gives your cat the exact recommended amount over time. This way, your Exotic stays fed all day long without running the risk of overfeeding.

You should also consider the ingredients of the food you provide your kitty with. Look for foods with a named protein source as the first ingredient and as few carbohydrate fillers as possible. You can also feed them wet food, which is often considered healthier and provides more water for your cat.

Exotic Shorthairs are peaceful companions. They are very tolerant of other pets and children, usually not showing any aggression or hostility. Laidback Exotics can learn to live with other cats or dogs with almost no problems.

Children also love to play with Exotic Shorthairs since they are playful yet very gentle and easygoing. You can supervise your cat’s interactions with younger children to teach kids how to be gentle and kind to pets.

Like most cats, Exotic Shorthairs still love their alone time. Ensure your Exotic Shorthair has its own space at home, like a cat tree or cat shelf. Having a refuge will let an older Exotic relax, away from kittens and kids when needed.

Exotic Shorthair kittens can be quite expensive, ranging from about $1,500 to $2,500. According to the Cat Fanciers’ Association, many breeders get requests for female kittens because they believe they’re sweeter and more loving.

However, this isn’t true at all! The CFA actually says that male kittens are often more affectionate than females, while females are considered more aloof.

Still, Exotic Shorthairs, both male and female, are loving and adorable. Their unique look and personality have made them popular within pop culture.

Exotic Shorthairs are popular with everyday families as well. They’re low maintenance, loving, playful, and laidback. For that reason, they’re the perfect addition to most families of any size!