With plush fur and a perfectly pom-pom-shaped tail, the Kurilian Bobtail is an adorable cat with irresistible physical qualities. The breed has continued to gain popularity overseas because of its gentle and loving personality.

While the Kurilian is still rare in the United States, this is a cat breed that’s hard to forget once you experience their unique social nature. Let’s learn more about this one-of-a-kind bob-tailed beauty, and what it takes to make one of these glorious kitties part of your own family.

Cats with short tails lived on the Russian Island of Sakhalin and the 56 volcanic Kuril Islands for at least 200 years. This naturally occurring cat breed ran wild until they were brought back to central Russia in the 20th century.

Used to surviving independently in the wild, the Kurilian Bobtail was instantly a hit in Russian households. The cats were talented mousers, and they took down rodent populations quickly. But people soon noticed that Kurilian Bobtails were more than just hunters—they also made great pets.

According to The International Cat Association (TICA), less than 100 Kurilian Bobtails have been registered in the United States. Despite their rare status, TICA accepted the Kurilian Bobtail to championship status in 2012.

Kurilian Bobtails are unique kitties that carry a ton of wild spirit in them. This is a cat that’s used to hunting in the wild and outsmarting predators.

Since they are naturally active, the playful Kurlian loves plenty of toys to keep them entertained. Try throwing beanies down the hall and watch them fetch. Dangle ribbons above them to see some acrobatics! Apply some CBD catnip spray on their favorite playthings for extra stimulation and fun times.

As a result of their former predatory nature, the Kurilian Bobtail is an excellent athlete. They can jump quite high! This cat loves to be high above the action, watching everyone from above. You may find that one of their favorite spots is hanging out on a large cat tree.

Their second favorite spot? Probably your lap! While the Kurilian Bobtail was once a feral breed, they quickly adapted to family life. This cat is known for being social and gentle. They’ll love curling up in your lap while you work or watch television. And don’t be surprised if you find them sleeping on your bed come night time.

The Kurilian Bobtail is a highly intelligent, trainable cat. Let them know what’s off-limits, and they’ll quickly learn. Of course, they might not always listen! This incredibly inquisitive cat cannot help themselves when it comes to exploring the countertops (when you’re not around!).

This hardy breed can adapt to many environments. They will easily fit into your routine and family. This cat can be a great travel companion for RVers since they don’t mind being on the move! They are easy-going and always looking to be part of the fun.

The Kurilian Bobtail is a burly breed that you can immediately picture roaming the islands on the hunt for rodents. The first thing you’ll notice is their tail. Unlike other tailless or bobtail cats, the Kurilian Bobtail’s short tail is often a perfect, pom-pom like circle.

The Kurilian is surprisingly heavy! They can weigh up to 15 pounds. This hefty cat is considered medium to large, with a compact body and broad chest. 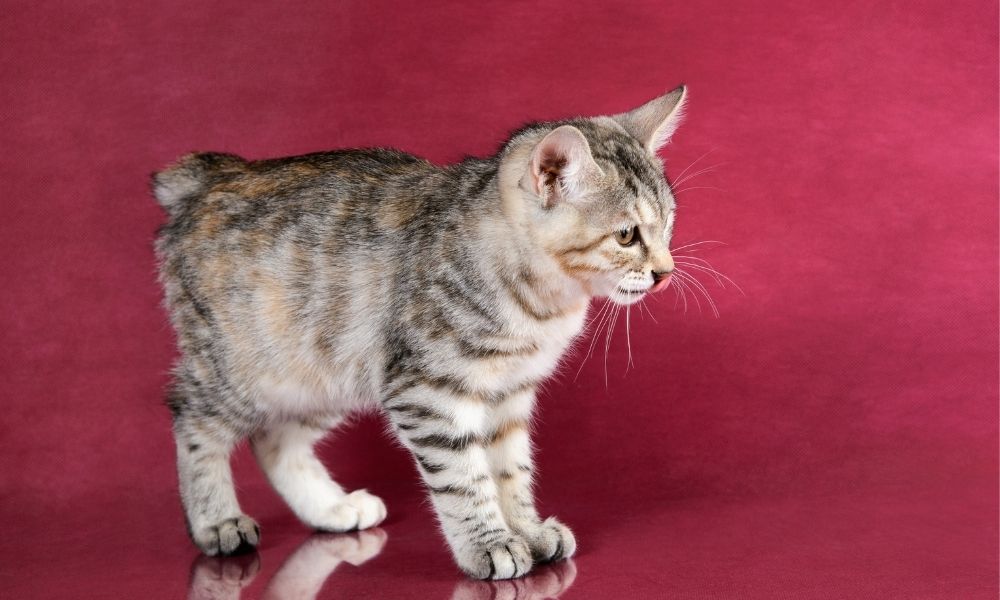 This breed’s tail is what sets them apart from other breeds. Each Kurilian Bobtail has a unique tail structure, but all of them resemble pom-poms!

The Kurilian Bobtail’s tail is short and bushy, and it can have anywhere from two to ten vertebrae. It can be shaped like a spiral or whisk. This unique tail can be kinked many times in various directions and angles.

Their walnut-shaped eyes are oval on the top and rounded on the bottom. The International Cat Association (TICA) doesn’t specify any standard eye color for this breed.

The Kurilian Bobtail has a soft and silky coat. They have semi-long hair. TICA describes it as “pleasant to the touch.”

This hardy cat breed comes in a variety of colors. They can feature either solid or tabby patterns. Kurlians can have any amount of white, and some have silver highlights.

The Kurilian Bobtail is a naturally occurring breed. This means they have a wider breeding pool, resulting in fewer health complications and hereditary diseases. There are no known health issues associated with the breed.

While the Kurilian Bobtail doesn’t carry any particular diseases, they still face the same health concerns as any other domestic kitty. These include:

The average lifespan of this natural breed is 16 years!

The Kurilian Bobtail loves to hunt—so keep them inside! Domestic cats are not a native species, so they can become invasive when let outside. They can destroy the local ecosystem by hunting small rodents and birds.

Keeping your Kurilian indoors also keeps them safe from cat-nappers, dogs, feral cats, parasites and pests, and wild animals. Just make sure they have puzzles and toys inside to keep them stimulated. They should also have cat trees and shelves for when they want to jump and climb.

Though the Kurilian Bobtail has semi-long fur, it isn’t known to mat. Brush them weekly to get rid of excess hair, reduce shedding, and cut down on hairballs.

You can also check their ears for wax and dirt buildup. Brush their teeth daily, and trim their nails each week.

The Kurilian Bobtail requires a high-quality cat food that has meat as the first ingredient. Note that this ingredient doesn’t include the word “meal” after it, which indicates a meat byproduct. It should be turkey, chicken, salmon, or another protein source.

A healthy alternative to dry food is canned food, which is low in carbohydrates. It contains over 70% water. Wet, canned food is a great way to give your cat the liquids they need to ensure they don’t become dehydrated.

If you want to keep your cat in excellent shape, you can add supplements like salmon or hemp seed oil to their diet. These formulas are rich in Omega-3 fatty acids, which may improve your cat’s immune system and skin and coat. 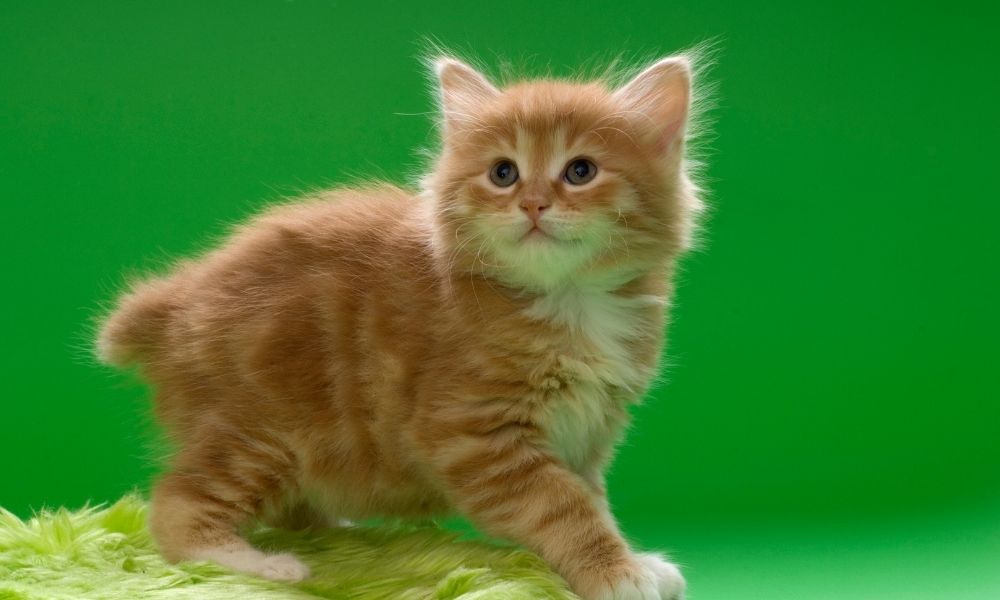 Adaptable, social, and gentle, the Kurilian Bobtail is great with children and other pets. When you first introduce them to other cats, be careful and go slow since they can be territorial of their home. But once the Kurilian gets to know the new kitty, they will become fast friends.

The Kurilian Bobtail is also great with dogs. They love to run around the house with pups, playing fetch and tag. You might even catch them cuddling when they think you aren’t looking! Just make sure the dog is cat-friendly before letting them interact.

While the Kurilian Bobtail is a fantastic canine companion, they are good pals for children as well. They are not likely to scratch or be aggressive. Make sure younger kids know how to properly treat the cat before playing with them. Some children might pull on the Kurilian’s fur or tail.

The Kurilian Bobtail is a rare breed. There aren’t many in the United States. TICA currently doesn’t even list any Kurilian Bobtails on their website! But, you can definitely find breeders in Europe if you look hard enough!

Some breeders swear that the Kurilian Bobtail is hypoallergenic. This claim hasn’t been verified on a wide scale, but it’s possible. Cat allergies are not caused by fur, as many believe. Allergies stem from proteins in the cat’s saliva, urine, and dander.

Even if Kurilian Bobtails aren’t hypoallergenic, there’s no denying that this is a cat breed you’ll love having around. Once a great, feral hunter on a volcanic island, this breed has become a loyal and devoted pet that loves to cuddle just as much as it loves to play and hunt. This is a cat you’ll always want by your side.