Cats come with a variety of coats, colors, tails, eyes, and personalities. But one of the most coveted traits in a cat is long fur. There is an abundance of long-haired cat breeds with luxurious coats, unique color patterns, and amazing personalities.

Long-haired cat breeds are not as common as short-haired breeds because it’s a recessive gene. But you can still find long-haired cats just about everywhere! While they take more grooming, the extra care is often worth it for cat fanciers looking for regal, majestic felines with gorgeous coats.

We’ll look at some of the most popular long-haired cat breeds out there, from the precious Persian cat to the smart Scottish Fold.

Is It Common for Cat Breeds to Have Long Hair?

The first documented, naturally occurring domestic longhair was in Italy in the middle of the 16th century. Long-haired cats arrived in Europe thanks to soldiers returning from the Crusades. These fluffy felines helped control the rat population, earning them high regard and allowing them to flourish.

A famous domestic longhair from London was known as Humphrey. He was a black and white street cat that resided near the British Prime Minister’s residence. The extremely likable cat was promoted to “Mouser to the Cabinet Office” and was fed by the British government. Humphrey was beloved by the public until he passed away at 18 years old. 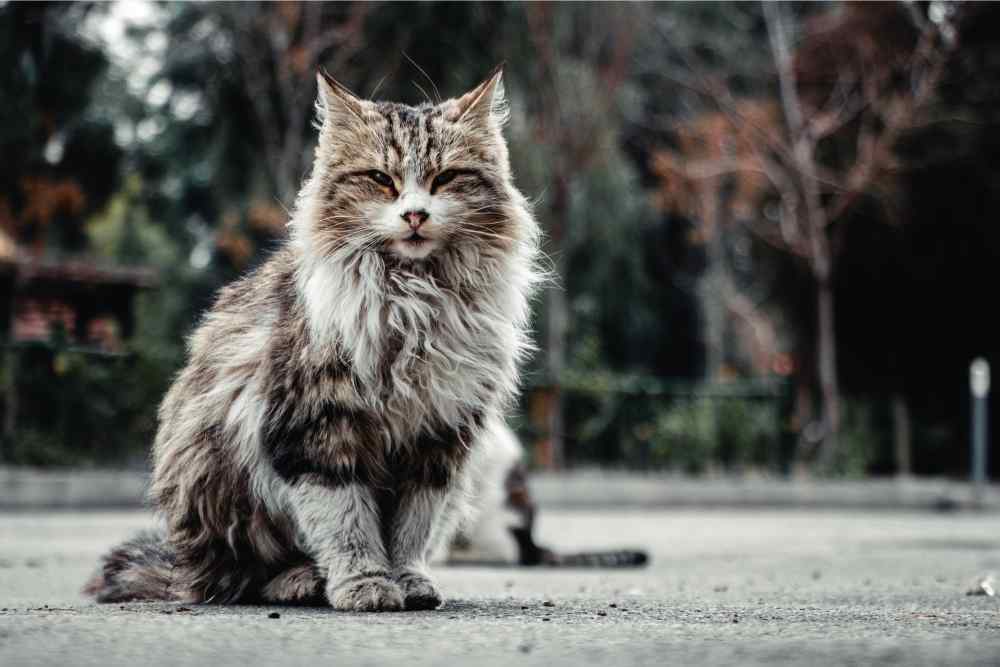 The Maine Coon is known for its large size and abundance of fur. They can reach 40 inches in length, and some are up to 18 pounds! Maine Coons also have a long coat that’s smooth and silky, including immense plumage around their neck and a very poofy tail. This has helped this sturdy and adaptable cat survive in the intense winter months of Maine.

The Maine Coon is known to be a gentle giant. They are loyal and social, hanging out with their family as much as possible. You’ll often see them following you from room to room, making themselves comfy as you go about your routine.

While affectionate, the Maine Coon isn’t a lap cat. They prefer to hang out beside you or play with you. They are patient with children and get along well with everyone.

The first thing you’ll notice about the Birman is its stunning coat. They have a cream-colored coat with dark points on their lower legs, ears, face, and tail. These points can be blue, cream, chocolate, tortoiseshell, or seal. This cat breed also has white paws and striking blue eyes.

The Birman isn’t only beautiful to look at. They have a winning personality that makes them a popular pet across the globe. Birmans are very social and affectionate. They are known to be very sweet, loving a good cuddle day and night. They are laid back and not usually too demanding. This is an intelligent and curious breed that can be trained.

This majestic beauty is one of the most popular cat breeds in the world. They have a thick coat, stocky body, and big, teddy bear eyes. Their most distinct trait, however, is their squished-in snouts and flat faces. Their long, heavy coat comes in various colors and requires a lot of care, including daily grooming to avoid matting.

Persians may look elegant, but they are known to be sweet and loving. They are low-key kitties that love affection and cuddles. They love a good brushing or petting session. Persians aren’t the most active, and you won’t find them wreaking havoc in your home. But they still need a good play session to be healthy. Persians are not afraid to be silly and often make you laugh with their strange antics.

Ragdolls are one of the most cuddly cats ever. They love being held and are known to flop into your arms like a ragdoll, hence the name. This smart kitty is gentle, affectionate, and craves attention. They are often known as “floor cats” since they don’t like to climb things or hang out on the counters. Instead, you’ll find them chilling on the couch, sometimes even lounging on their backs!

The Ragdoll has a long, silky coat and no undercoat. They don’t shed as much as other long-haired cats because of this. But they are big, usually weighing around 20 pounds or more and reaching 21 inches long (not counting the tail)!

Ragdolls come in three coat types: Colorpoint, bicolor, and mitted. Colorpoint (or seal) Ragdolls have a cream coat and a darker color around the eyes, ears, tail, limbs, and stomach. Bicolor Ragdolls are similar but also have an inverted-V coloring pattern on the face. Mitted Ragdolls are similar to seal, except they have white paws. No matter the color, Ragdolls have striking blue eyes. 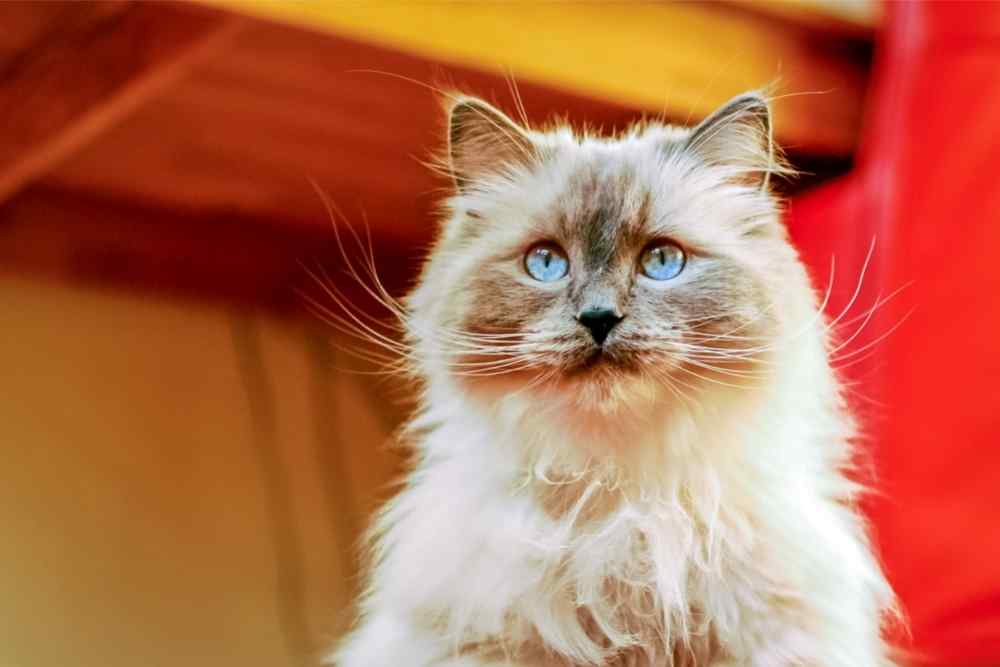 This hefty kitty has fur built for the icy forests of Siberia. Their coat is triple-layered and water-resistant. They also have sturdy, muscular bodies and come in a variety of colors and patterns. The Siberian doesn’t shed a lot, but you’ll notice them “molt” during the spring and winter. They are considered hypoallergenic because their skin produces less Fel-d1 than other breeds.

The Siberian is very playful and affectionate. They are kitten-like in spirit but are known to be quite mellow overall. They are not very vocal. The Siberian is known to love everyone they come across, including children and other pets. This cat is a great hunter and will enjoy interactive toys that simulate catching rodents.

Turkish Vans are a bit rarer than the other cats on this list, but their beauty and unique personality have a large group of devoted fans and owners. The Turkish Van has an almost all-white coat with either red, cream, black, blue, or tabby colorings in small spots throughout. Their fur is super soft and lays close to the body, making this breed look extremely soft, almost satin.

The Turkish Van’s long coat is water-resistant! This cat is known for its love of water. They love to swim snd will also find all of the water sources in the home, whether it’s a bathtub, sink, or toilet. They are an athletic breed that is also great at jumping.

This intelligent breed is easily trainable. They love to fetch. You’ll often see Turkish Vans walking on leashes! The Turkish Van is energetic but also very affectionate. While not a lap cat, they love to be pet and often hang out near their favorite humans.

This large, fluffy cat is usually around 16 pounds with a long, bushy tail and a full coat. Their water-resistant coat was how the Wegie survived the harsh Norwegian winters. But it also means they need a lot of brushing to avoid massive amounts of matting and shedding.

The Norwegian Forest Cat is friendly and gentle. They get along with almost everyone and are quite adaptable to different types of living situations. They love affection and crave attention. This is a family-oriented breed that loves lying next to you. The Wegie also loves to play and is quite alert.

This massive breed can reach up to 20 pounds or more. Their coat is thick and plush and comes in a variety of colors and coat patterns. They look a bit similar to the Ragdoll, with large, expressive eyes.

This easy-going breed is sweet and loving. They are sometimes compared to teddy bears. But this cuddly breed also loves to walk on a leash, play fetch, and hang out with cats and dogs. If you’re looking for a warm and loving breed that loves to learn tricks, the Ragamuffin is right for you!

There is also an abundance of breeds that come in both short-haired and long-haired varieties. Here are a few of them:

Many long-haired cat breeds are more expensive than their short-haired counterparts because they take a bit more effort to breed. Since long hair is a recessive trait, it takes more time to get long-haired litters that meet breed standards. They also take a lot more grooming and coat care. But the cost of each long-haired cat varies from breed to breed.

What Breed of Cat Has the Most Hair?

The cat with the most fur often goes to the Persian. The Persian not only has very long fur but an abundance of it. They can often look like a big ball of fur thanks to their long, flowing coats and very full tail.

A Persian mix holds the record for the longest cat hair in the world. Sophie Smith currently holds the Guinness World Record for longest fur on a coat. The California native’s coat reaches 10.11 inches at its longest point. This beat Colonel Meow’s record by more than an inch.

Each long-haired cat breed has its own unique personality and appearance. But one thing they all have in common is a luxurious, stunning coat!

Long-haired cat breeds are growing quite popular due to their beauty and uniqueness. The Persian is one of the most popular cat breeds in the world. But the water-loving Turkish Van and cuddly-hungry Ragdoll are giving the royal Persian a run for its crown.