The first thing you might notice about the Manx cat is that it doesn’t have a tail. While that’s definitely one of the Manx cats’ more noticeable features — setting it apart from other breeds — you’ll soon realize that there are even more unique features to love about this feisty and truly affectionate cat breed!

Whether it’s jumping high up in the air to catch a toy or bounding down the hall at top speed, there’s no question that their lack of tail doesn’t hold the Manx back. They’re excellent hunters with powerful hind legs and a quick-thinking mind.

But, Manx are also lovable cats that enjoy spending time with their family, making them one of the most entertaining and lovable cat breeds out there.

The Manx is an ancient breed with a lot of myths surrounding their taillessness. Some say that the Manx was late boarding Noah’s ark and a door slammed on their tail when they rushed in the last minute. Others say that Manx cats are a hybrid between a cat and a rabbit.

There’s another theory that Viking raiders and Irish invaders would steal kittens to use their tails as good luck charms. To avoid this practice, mother cats would bite their kittens’ tails off.

While these are most likely tall tales, Vikings are thought to be involved in the actual origin story of the Manx.

The Manx originated on the Isle of Man in the Irish Sea, where the island’s native shorthair cats often carried a dominant mutation that caused them to be tailless. It’s possible they arrived on the island when the Spanish Armada crashed there in 1588.

The cats inhabiting the ship swam ashore, becoming the island’s rodent control. It’s also thought that Manx were introduced to the Isle of Man by Phoenician traders who took the cats from Japan. 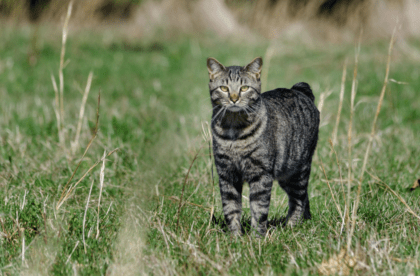 Vikings discovered these unique tailless cats and brought them aboard their ships. When they bred with different cats in other areas, the Manx also gained its longhair gene.

They are thought to be the ancestors of today’s Norwegian Forest Cats.

According to the Cat Fanciers’ Association, all Manx cats have at least one gene for a full tail. This means even two tailless Manx can produce a kitten with a normal tail. Manx kittens will also have various tail lengths, from full tail to no tail at all.

Sometimes you’ll see a variety of tail lengths within one single litter! But only Manx cats with a slight bump where their tail would be are eligible to compete in CFA cat shows.

The Manx was one of the original show cats. They were represented in the first cat shows held in Great Britain. Their ancient legacy continues, as when CFA was founded in 1906, they were one of the founding breeds.

The Manx cat is growing in popularity thanks to its unique looks and infectious personality. The Manx may be missing its tail, but they are still expressive and energetic cats who aren’t held back by their genetic mutation.

In fact, Manx cats are known to be impressive jumpers.

Their powerful back legs allow them to reach almost any spot in the house so don’t be surprised if you find cat hair on your counters or see your Manx exploring the top of the refrigerator.

Sturdy and tough, the Manx is also a great hunter. Keep birds safe from this jump-happy feline by keeping them indoors and providing a wide array of toys for them to chase and toss around.

You’ll often find your Manx racing around the house, chasing after balls and toy mice.

Test their agility with a laser pointer or ribbon toy. You’ll quickly notice that their lack of a tail doesn’t hold them back!

Manx are known to be very loyal cats. Some will choose a favorite human to dutifully follow around while some Manx prefer to constantly interact with the entire household, regardless of age or species.

They are gentle and affectionate once playtime is over, making them a great cuddling companion.

The Manx cat is said to be pretty vocal as well. If you’re not paying attention to this tailless acrobat, they’ll usually let out a few (or more) high pitched, drawn-out meows. 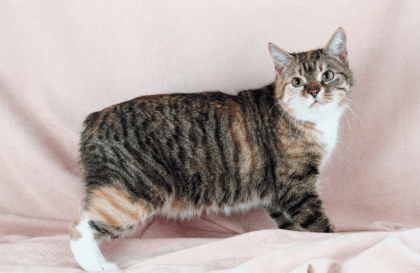 The Manx is a robust cat breed that’s known for its strength and hunting prowess. Their round head and circular eyes make them appear friendly and alert. Oh, and they often have no tail, making them one of the most unique cat breeds around!

Adult Manx typically weigh eight to 13 pounds. They have a round body and a broad chest. Their flank area has a greater depth than most breeds. The CFA says they are “surprisingly heavy” when lifted.

But the Manx cat often won’t reach its full adult size until they’re around five.

Matching their body shape, the Manx cat has a round head with prominent cheeks and a “jowly appearance.” They also have round, big whisker pads, a long muzzle, and a short, thick neck.

Their ears are wide at their base and they have large, round eyes.

The Manx cat’s eye color should match their coat color. Their eyes often range from gold and copper to blue, green, and hazel.

Some Manx will even have odd-colored eyes, depending on their fur.

Manx cats have muscular and heavily boned legs. Their front legs are strikingly shorter than their hind legs. The hind legs are described as “substantial” with heavily muscled thighs.

Their paws are round, with five toes in front and four toes on their back paws.

The Manx cat can have a shorthair or longhair coats. Shorthaired Manx have a well-padded double coat. The outer fur may seem a bit course but glossy. Manx with long fur also have a double coat which is also dense and well-padded. The fur will thicken as it goes towards the back of their body.

Toe and ear tufts are desirable. Unlike their shorthaired counterparts, longhaired Manx have soft and silky fur. The double coat makes it appear plush and full.

The Manx coat comes in a variety of colors. This includes white, black, blue, red, cream, calico, tortoiseshell, and bi-color. When it comes to coat patterns, the Manx can have any variation of tabby.

While Manx can come in a pretty hefty list of colors and patterns, all-white Manx are considered a bit rarer. 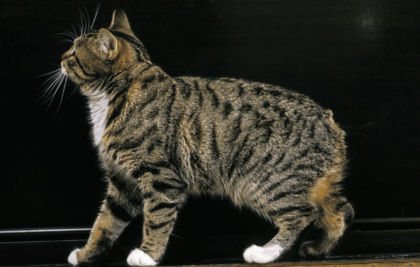 Because of their double coat, the Manx has to be brushed almost daily to avoid mats and knots.

This is especially important during the spring and fall when the Manx is shedding a bit more heavily. This will help them avoid hairballs, too.

You should also check your Manx’s ears regularly to ensure there’s no wax or dirt buildup. You can also trim their nails weekly to save your couch.

Manx cats are intelligent cats that love to hunt. It’s important to provide interactive puzzle toys for your cat to keep them busy and stimulated. You can also teach this tailless cat how to play fetch, which will further satisfy their need to learn — and chase.

Manx cats should be kept indoors. It’s been estimated that free-ranging domestic cats kill 1.3 to 4 billion birds and 6.3 to 22.3 billion mammals annually. This has led to them being labeled a pest or invasive species in some countries.

As an avid hunter, the Manx should be kept indoors to protect wildlife. This will simultaneously keep your cat safe from dogs, wild animals, cars, and catnappers who can’t resist their unique appearance.

This cat breed absolutely loves to eat. It’s very important for Manx cats to have a strictly controlled diet to help them avoid becoming overweight. One way to ensure that they are getting the proper amount of food throughout the day is by implementing an automatic feeder.

This way, your cat can’t scarf all of their food down in the morning, leaving them to beg for more throughout the day.

Make sure you are giving your pet a commercial cat food brand that has the proper ingredients and nutrients for your cat’s age, size, and lifestyle.

We recommend a quality cat food that features a named protein source as the first ingredient (like chicken or salmon) and a minimal amount of carbohydrates.

These “fillers,” like corn and wheat, are not necessary for a cat’s diet and provide no nutritional value. They are also the reason many cats gain weight or have food allergies.

Another important ingredient to always check for is taurine. This is an amino acid that cats require to stay active and healthy. 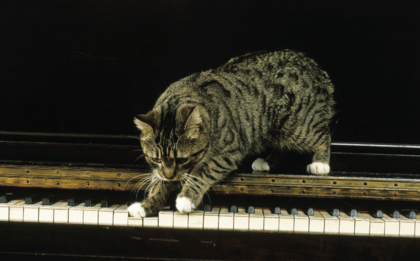 The Manx is an outgoing cat breed that enjoys interacting with people of any age. Children will also have a blast playing with Manx cats since they love to play fetch and race around the house.

Despite their rambunctious energy during playtime, Manx are known to be gentle with younger children.

Manx are often described as “dog-like” due to their outgoing personalities and high energy. They make a great playmate and companion for dogs with a gentle disposition. You will often find them playing fetch together or even cuddling once they are used to each other’s presence.

Manx also enjoy spending time with other cats if they’re properly introduced. A second cat is actually a great idea since the Manx cat doesn’t like being alone.

Earlier we mentioned that the Manx is an ancient breed. But did you know they were one of the first cats to be featured in cat shows? They were exhibited throughout Great Britain since the late 1800s.

The first known breed standard for these cats with no tail was in 1903 before the Cat Fanciers’ Association was even founded! 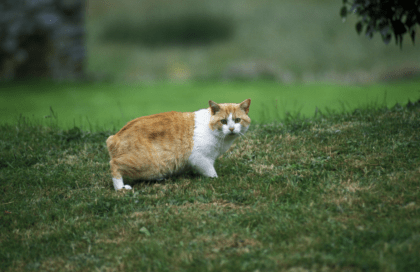 And when the CFA was formed three years later, the Manx was one of their founding breeds. This led to the Manx becoming a prominent pedigreed cat in the United States in the 1920s and beyond.

While only Manx with a stump tail are able to be registered in cat shows, tailed variations are still valuable to the ongoing breeding of the Manx.

The CFA even notes that there’s been numerous Grand Champions, as well as regional and national winners, who have come from tailed parents. According to the Cat Fanciers’ Association, the first Manx to receive a Distinguished Merit award (a female cat that’s produced five grand champions) was a long-tailed Manx.

Here’s a fun fact about the Manx cat’s tail lengths. Each tail variation actually has its own name in the cat show world:

Manx cats are usually around $600 to adopt from a reputable breeder.

Ever since their discovery on the Isle of Man, this cat breed has been quite popular with people all over the world. But it’s not only humans that are drawn to this special feline.

The sign language learning gorilla, Koko, owned her own Manx cat. In 1984 (her 12th birthday), the intelligent ape was allowed to pick a kitten from a litter. Koko picked a grey and white cat without a tail, calling it “All Ball.”

They were often found playing and cuddling together until All Ball was hit by a car later that year. Koko had two other pet cats after her beloved Manx.

Whether it’s curling up on your bed to keep you company while you read or racing throughout the living room after a feathery toy, the Manx is the perfect companion for any sized family.

They get along with just about anyone, although they may choose a specific human to crown their favorite. This is a cat you’ll always have by your side.