With a gloriously long gray coat and striking green eyes, the Nebelung is one of the most beautiful cats you’ll ever see. This silky, fluffy breed may look regal and reserved, but what sets the Nebelung apart is their affectionate nature and lovable personality.

If you’re looking for a loyal cat that never wants to leave your side, the Nebelung is for you. This cat is not afraid to show how much it loves you. So, be prepared for tons of cuddling, snuggling, petting — and finding your Nebelung on top of your freshly folded laundry or laptop.

The beautiful, sleek Nebelung has some humble beginnings. The relatively new breed started in the early 1980s when two black cats, one shorthaired and the other longhaired, had a litter of three kittens. One of the shorthaired kittens was named Elsa.

In 1984, Elsa produced a litter of her own with a tomcat that resembled a Russian Blue. Interestingly enough, Elsa’s two shorthaired kitties produced a litter that included one longhaired solid blue kitten. Both parents possessed the recessive longhair gene.

The beautiful blue kitten, Siegfried, was adopted by Cora Cobb in Colorado. Cobb became enamored with Siegfried as he grew, marveling at his beautiful appearance and loving personality.

Cobb moved to Texas in 1985, taking the two cats with her. They produced a litter in 1986 that had three blue longhaired kittens. Cobb named the breed Nebelung, a German word that translates to “creatures of the mist.” She then approached The International Cat Association (TICA) to see how she could establish them as a new breed.

TICA’s genetics chair, Dr. Solveig Pflueger, gave Cobb some guidance. She ended up drafting the Nebelung’s breed standard — making it the same as the Russian Blue’s aside from the coat length. TICA accepted the Nebelung for registration in 1987.

The unique cat quickly became a hit with cat lovers. Nebelungs were shown at TICA’s cat show in Paris in 1989. TICA granted the Nebelung championship in 1997. Today, ACFA, CFF, TICA, and the World Cat Federation recognize the Nebelung cat breed.

The Nebelung’s long blue coat is striking, but what made Cobb and so many others fall in love with the breed is its personality. This cat is surprisingly sweet and loving, making them devoted companions.

This blue beauty will happily follow you from room to room. They always want to be a part of the action, whether it’s folding laundry, making the bed, cooking dinner, or getting work done on the computer. They’ll be sure to help you in any way they can, which usually involves sitting nearby or on things!

But their favorite place to sit is on your lap. Nebelungs love cuddling with you and adore being pet and brushed. If your lap isn’t an option, the Nebelung will sprawl out beside you, purring and stretching their limbs.

While the Nebelung is social and sweet, they usually latch onto one or two humans who become their favorite. They are more reserved with strangers. Guests they don’t trust yet will send them running for their favorite hiding spot.

Because the Nebelung is so devoted to their family, it can upset them immensely when you’re gone — especially if the absence is unexpected. This is a cat that needs love and affection, or they get stressed and sad.

Nebelungs are creatures of routine. If there’s a disruption or household change, they might become anxious. If your work schedule changes or you move into a new house, make sure to pay extra attention to your Nebelung and give them some CBD cat treats to help them stay calm.

Create new routines for them so they can feel a sense of stability. Before you leave for work, make sure to call them over and pet them. Before you feed your Nebelung dinner each night, throw in some playtime right before their meal. When your kitty knows what to expect throughout the day, they can adapt to the change much quicker.

Nebelungs are usually very quiet and easy-going. But, they will let you know if something concerns them. For example, they will get offended if they don’t have fresh water and a clean litterbox. Stay on top of these things, and the Nebelung will remain happy with their environment! 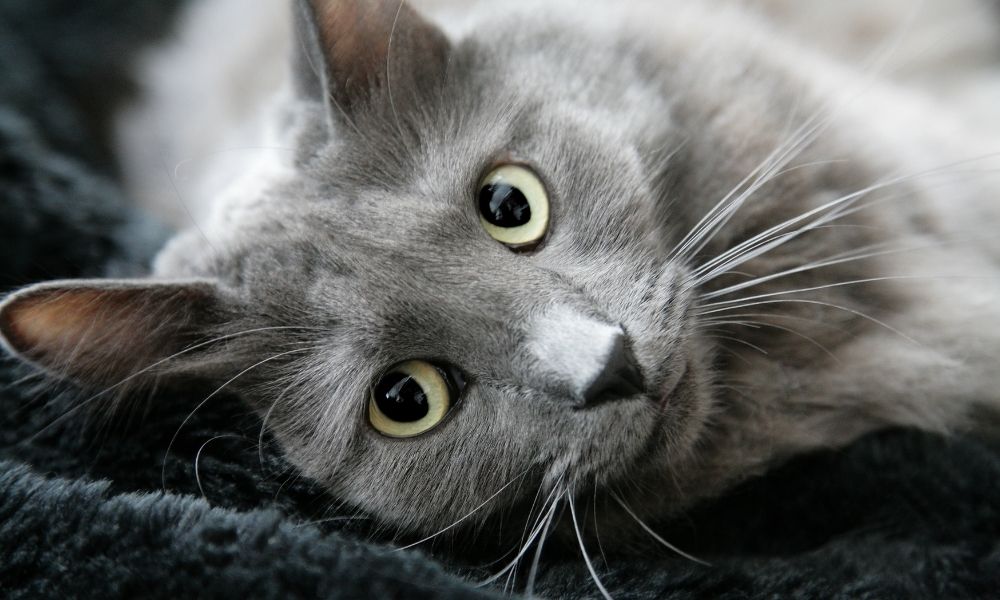 The first thing you’ll notice about the Nebelung? Its long, blue coat. The second? Its bright, vivid eyes. This fluffy kitty has a very regal look thanks to its stunning fur and sturdy, well-muscled body.

This cat is considered medium-sized. They weigh between 7-14 pounds. They are well-proportioned and athletic, with a long and graceful body. The Nebelung’s tail hair is longer than the rest of their body, making their tail look quite large. But, it should be balanced with the body, equal in length.

Nebelungs have a pointed head (although their long fluff makes their face appear rounder). The tip of their nose to the tip of their chin is a straight line. Their ears are large and pointed.

The Nebelung’s eyes stand out against their blue fur. They are oval and spaced far apart. The American Cat Fanciers’ Association states that their medium-sized eyes should be “as vividly green as possible.”

It can take up to two years for their mature eye color to appear. Kittens will often have yellow eyes that change to green. By eight months, you should see a green halo around the pupil. Green eyes with a yellow tint is also permissible.

The Nebelung’s legs are long with medium boning. Their feet are also medium in size, well-rounded with “generous tufts” between the toes. They always appear to stand or walk on the balls of their feet.

The Nebelung’s coat makes this breed extra special. The fur is medium-long, increasing in length from shoulder to tail. Males will have large neck ruffs. The female cats will too, but not as extravagant as the male’s. The fur is longer on their tail.

The Nebelung’s two-layered coat is very soft! It’s also resistant to water. Their outer coat is described as fine and silky. It can take up to two years for Nebelungs to get their mature coat length.

The Nebelung only comes in blue. The undercoat is a lighter blue than the guard hairs of their outer coat. The entire coat has a soft, lustrous sheen.

While all cat breeds can develop or carry health problems, the Nebelung is considered pretty healthy. Always adopt purebred cats from a reputable and registered breeder. The vendor should be able to provide a health guarantee for their kittens. If they don’t, look elsewhere!

Here are the most common health problems associated with the Nebelung cat breed.

Untreated kidney disease in cats can lead to various complications. Kidney failure means this organ is no longer filtering waste in the body. Early diagnosis, regular vet visits, and proper care can boost the quality and length of your cat’s life. Signs of kidney disease are:

Middle-aged cats and older are susceptible to hyperthyroidism. This condition is caused by an increase in the production of thyroid hormones from an enlarged thyroid gland. Too much thyroid hormone can cause lead to many issues in your cat’s body.

Look for subtle signs to catch hyperthyroidism early. Regular vet visits ensure that your cat can get diagnosed before the issue becomes severe. Be on the lookout for weight loss, vomiting, diarrhea, dehydration, and frequent urination. Your cat’s coat might also look matted or feel greasy.

If you notice increased thirst and urination, weight loss, and sweet-smelling breath, it’s possible that your cat has diabetes. Diabetes is most common in obese cats, but all cats are susceptible.

Diet is very important for cats with diabetes. A low-carbohydrate diet can help them thrive. Vets will also suggest insulin therapy and frequent vet visits to help stay on top of their symptoms. 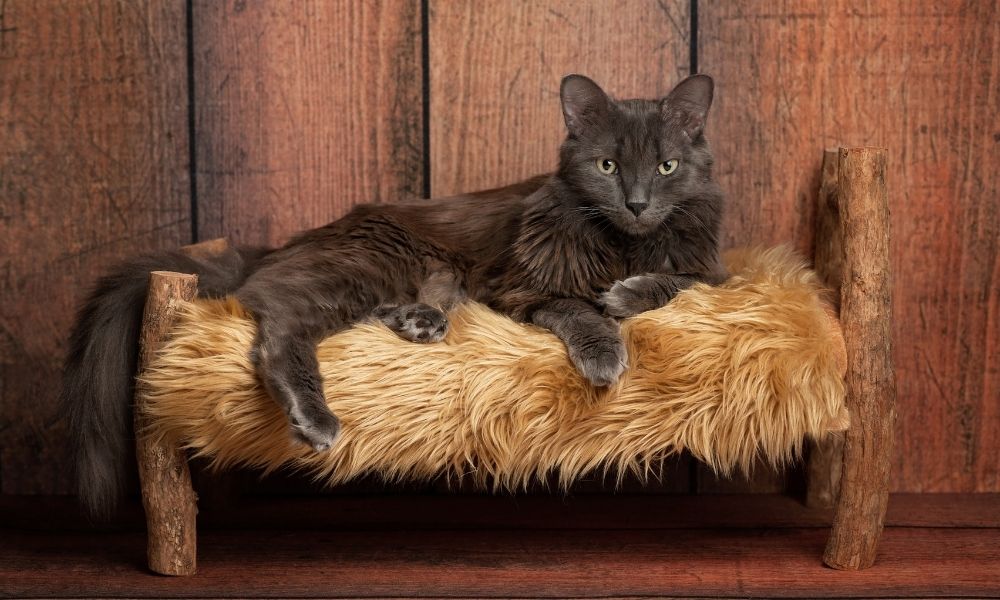 Expect your Nebelung to live to 16 years or more!

It’s also essential to check your Nebelung’s ears for wax or dirt buildup often. Talk to your vet about safe ways to gently clean their ears. They’ll provide vet-approved wipes. You can also trim their nails every week. Clean their eyes gently each morning with a soft tissue to avoid eye infection. Brush their teeth each night to prevent gingivitis and gum disease.

Keep your Nebelung inside! This is a very beautiful cat breed that might get attention from cat-nappers. The Nebelung will also stay safe from dogs, feral cats, predators, and cars. Just make sure your cat has plenty of toys, cat trees, shelves, and other things to keep them busy indoors.

Since Nebelungs are prone to diabetes, it’s very important to ensure the cat food you provide them is low-carb. This means it isn’t packed with wheat and corn. These ingredients are often called “fillers” because cats don’t actually need them in their diet. These ingredients tend to make cats overweight or allergic to their food.

A healthy alternative is wet food. Canned food has fewer carbohydrates and contains over 70% water. Wet food is a great way to give your cat the liquids they need to ensure they don’t become dehydrated.

It’s a great idea to get a second cat for the times you are away since Nebelungs can get lonely. This kitty gets along well with other felines, but remember that the Nebelung can be quite shy. You must introduce cats slowly. Give them plenty of time to get used to each other’s scent before allowing them to meet face-to-face.

Louder dogs and energetic children might scare the Nebelung at first. This cat can be nervous around people and pets they don’t know or trust yet. Nebelungs have no issue with non-aggressive dogs and children who can interact with a cat respectfully. Always supervise interactions, making sure younger kids don’t pull their fur or tail.

More About The Nebelung Cat Breed

The Nebelung is a relatively rare cat breed. You won’t find them roaming the streets or filling up shelters. But Nebelung breeders are becoming more and more prevalent as the popularity of this unique and beautiful cat grows around the world.

Interesting fact: Nebelungs’ appearance differs slightly depending on what region it comes from. European Nebelungs are larger than Nebelungs from North America. Nebelungs in New Zealand and Australia can sometimes be shades of white and black.

But one thing is always consistent: The Nebelung’s sweet disposition. This is a loyal, loving breed that’s dedicated to you and your family no matter what. They will follow you from room to room, always wanting to be a part of the action. And they will never say no to a good cuddle.