With its silky, long coat, bright, inquisitive eyes, and fluffy tail, the Ragamuffin is one of the most stunning breeds in the entire cat fancy. But what makes the Ragamuffin so popular is its loving, loyal personality. This is a cat that will never leave your side!

Not to be confused with the Ragdoll, the Ragamuffin is a cuddly breed that’s known to go limp in your arms. But what makes it different from its close relative, the Ragdoll? Take a closer look at the Ragamuffin’s history, personality, and care below.

You’ve heard of the Ragdoll. The Ragamuffin is a breed that shares much of its history with this fellow fluffy feline.

The first Ragamuffin is believed to be Josephine, a feral Turkish Angora with a solid white coat. She had a litter of kittens in Riverside, California, which included a mitted seal point long hair with a white-tipped tail. The unique kitten was named Daddy Warbucks.

At the start of the breed’s creation, there were longhairs with a pointed pattern and mitted feet. They were called Cherubim. The non-pointed, non-mitted longhairs were called Miracle Ragdolls. There were also solid and bi-color longhairs.

After the breed’s founder trademarked the name “Ragdoll” in 1971, some people split from the Ragdoll association and established the Ragamuffin. This cat was considered a new breed, not a color division of the Ragdoll.

The Ragamuffin went through the entire process to become accepted by the Cat Fanciers’ Association. Today, all associations except the Canadian Cat Association recognize the breed.

Because of their shared ancestry, Ragamuffins have a similar temperament to the Ragdoll. They are known for their loving and attentive personalities. You’ll usually find them cuddled next to you on the couch, sleeping on a nearby chair while you cook, or sitting atop a cat tree in the same room as you.

But the Ragamuffin isn’t content with just hanging out around you. This cat breed loves to cuddle. They want nothing more than to snuggle in your arms or curl up on your lap. Like the Ragdoll, they are more than okay with being handled. They even go limp when you hold them!

The Ragamuffin is known for its friendly and adaptive nature. This is a cat that will greet you at the door every day. They will even greet guests! Ragamuffins also get along with everyone in the household, regardless of age and species. Although they’re not very active, they are down for some playtime with their favorite humans. 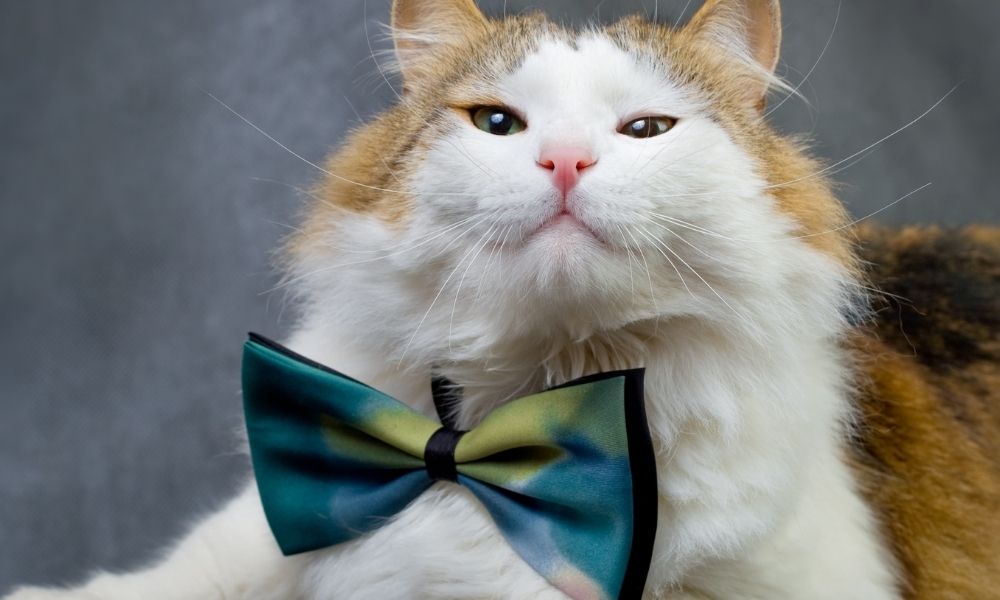 A Ragdoll with different color fur? Hardly! The Ragamuffin has tons of unique and distinct characteristics that make it very much its own breed. From their innocent, round face to their glorious, fluffy coat, the Ragamuffin is a striking cat breed that cat lovers can’t get enough of.

This is a pretty hefty kitty. Female Ragamuffins weigh between 10 and 15 pounds, and males can weigh up to 20! The Ragamuffin has a broad chest and shoulders as well as heavy muscling in the hindquarters. They have a fatty pad in the lower abdomen.

The Cat Fanciers’ Association (CFA) describes this breed as having a balanced appearance. Their body size, shape, and weight distribution are all proportionate. Their long, fluffy tail is also in agreement with their body.

The Ragamuffin has a rounded head and muzzle. They have a puffy whisker pad, and their cheeks are full. All of this roundness gives the Ragamuffin a “sweet look.” The Ragamuffin’s neck is short, heavy, and strong.

Adding to the Ragamuffin’s wholesome, round face are their large, wide-set eyes. Their walnut-shaped eyes have a slight slant.

The CFA calls for an intense eye color, but they don’t name any specific shade. Ragamuffins can have yellow, aqua, and even odd-colored eyes.

Their ears are medium in size. They are rounded and tilt slightly forward.

The Ragamuffin has heavily boned medium-length legs. Their back legs are somewhat longer than their front legs, although all four are in proportion to their body. The paws are large and round with tufts.

The coat sets the Ragamuffin apart from the Ragdoll and every other cat breed in the fancy. Their glorious fur is medium to long. The CFA describes the texture as soft, dense, and silky. It’s longer around their neck and face.

Ragamuffins can come in every color and pattern aside from points. This is quite the opposite of the Ragdoll. Muffins can have white spots on their paws, back, chest, or belly — or no white at all. The Ragamuffin comes in so many shades, colors, and patterns that it brings the Cat Fanciers’ Association breed standard to a staggering nine pages!

This impressive kitty can live up to 18 years — or more!

The Ragamuffin is a generally healthy cat that can live a long life, if provided with adequate care and regular vet visits. Always adopt Ragamuffins from reputable and registered breeders. They should be able to provide a health guarantee for their kittens. If they can’t, find another breeder.

While the Ragamuffin doesn’t have many known hereditary health issues, they can carry two diseases that are common for the majority of domestic cats: hypertrophic cardiomyopathy and polycystic kidney disease.

This is the most common form of heart disease in cats. It occurs when the heart muscle thickens, making it difficult for the cat’s body to pump blood. You’ll notice your cat acting lethargic and having trouble breathing. If you suspect any health issues, take them to the vet immediately.

PKD is an inherited disorder in which clusters of cysts develop within your cat’s kidneys. This causes the kidney to enlarge and lose function over time. Look for increased thirst, vomiting, lethargy, and blood in your cat’s urine. 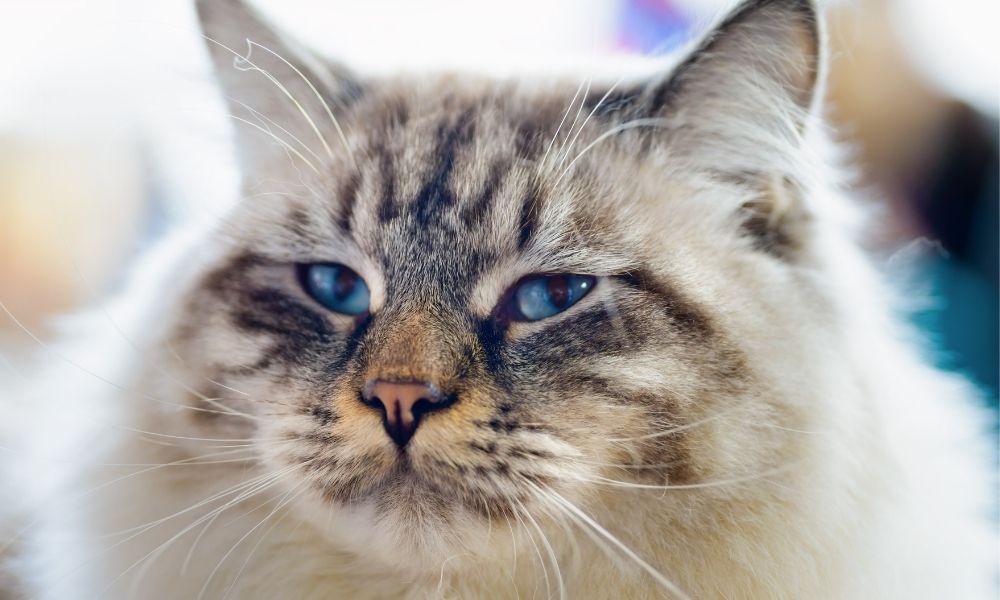 The Ragamuffin is very fluffy. But their coat does not mat or knot too easily. You should still brush your cat weekly, however, to remove dead and excess fur. This will decrease hairballs and shedding.

Check your cat’s ears for dirt and wax buildup. You can also clip their nails each week. It’s also important to brush your cat’s teeth daily (if possible) to fight dental complications.

You should keep your Ragamuffin indoors. They are loyal and loving cats that will trust anyone. This trait makes them susceptible to getting snatched by strangers looking for a beautiful, free kitty.

Since Ragamuffins are not too active, the outdoors can also be very dangerous for them. They are an easy target for predators, dogs, feral cats, and cars.

Even though Ragamuffins don’t demand much playtime, you should still ensure they get their daily dose of exercise inside. Encourage them to play by taking part in activities with them, like shaking ribbons or throwing toys they can’t resist. You can even try spray toys with CBD catnip spray to make them even more irresistible!

Ragamuffins may be large (with some extra chub on the abdomen), but they shouldn’t be overweight. The amount of food you feed your Ragamuffin is especially important because this kitty can be a bit lazy. Install an automatic feeder to ensure they are getting the right amount of food throughout the day. This also stops them from begging you for more.

It’s always important to look for cat food brands with quality ingredients. What ingredients should you keep an eye out for? The first is a protein source like turkey, chicken, salmon, etc. If the first ingredient is “chicken meal,” the food is probably mediocre.

The second ingredient to look for is taurine. This amino acid naturally occurs in animal protein. Cats curiously don’t produce it themselves despite needing it to stay healthy and active. The minimum daily taurine requirement is between 25 and 56 mg.

You want to avoid cat food heavy in carbohydrates, including wheat and corn. These ingredients are often called “fillers” because cats don’t need them in their diet. These fillers often make cats overweight or allergic to their food.

A healthy alternative to traditional cat chow is wet food. Canned food has less carbohydrates. Instead, it contains over 70% water. Wet food is a great way to give your cat the liquids they need to ensure they don’t become dehydrated.

The Ragamuffin is an easygoing cat that gets along quite well with other pets. They aren’t as territorial and aggressive as other cats, but introduce them slow to ensure nobody gets scratched. If properly acquainted, you’ll see your Ragamuffin cuddling with another kitty in no time.

Ragamuffins also make great pals for dogs. Just make sure to watch their interactions in case the dog starts playing too rough. Ragamuffins are gentle giants who might not fight back.

The same goes for children. You should supervise younger kids in case they pull the tolerant Ragamuffin’s tail or fur. Once a child knows how to get along with the Ragamuffin, they will love cuddling with this fluffy snuggler.

Ragamuffins are known for their brilliant, colorful fluff. But the Ragamuffin is actually born white! They don’t fully mature for three years or more, meaning you won’t see their color pattern and full coat for quite a while.

The Ragamuffin is the 33rd most popular cat breed. Its rising demand is thanks to its beautiful, large coat, wholesome appearance, and loving personality. This is a cat that wants nothing more than to snuggle you! There’s nothing quite like holding a limp, purring Ragamuffin!