What makes a Russian Blue cat special? You’re probably thinking it’s their unique and spectacular plush, blue coat. But they are special for so much more than that. Surrounded by mystery, the Russian Blue is a shy and reserved cat that comes alive when they have a couch to cuddle on or a toy to fetch.

According to the Cat Fanciers’ Association (CFA), the Russian Blue has a mysterious history full of legends and lore. It’s believed that this striking feline originated from the Archangel Isles in northern Russia. The winters in this area led the cats to develop plush, dense coats.

Prized for its unique and beautiful appearance, the Russian Blue debuted at London’s Crystal Palace in 1875. Originally called an “Archangel Cat,” they competed with other blue cats. But by 1912, the Russian Blue was given a separate competitive class in England and Scandinavia.

Breeders continued to develop the bloodline, eventually importing the Russian Blue to North America in the 1900s. After World War II, breeders in America started to combine their cats with European bloodlines.

The Russian Blue is also known as the Archangel Blue, the Foreign Blue, and even the Maltese Cat.

The Russian Blue is an elegant breed with a reserved personality. They are usually quiet, somewhat shy, and sensitive to their owner’s emotions.

While they can be a bit nervous around strangers and loud noises (like vacuums and rambunctious children), Russian Blues are quite affectionate with their family. They enjoy relaxing with their favorite humans on the sofa or cuddling at night on the bed.

Russian Blues will casually follow their owners around from room-to-room and even greet them at the door when they return home. Unlike needier breeds, you can leave Russian Blue cats alone while you’re at work. While they enjoy some alone time, Russian Blues still require affection when you are at home.

Russian Blues are content with sitting on a cat tree or looking out the window at birds. But Russian Blue cats can get pretty excited during playtime, especially when their family is involved. They are known to really love playing fetch! 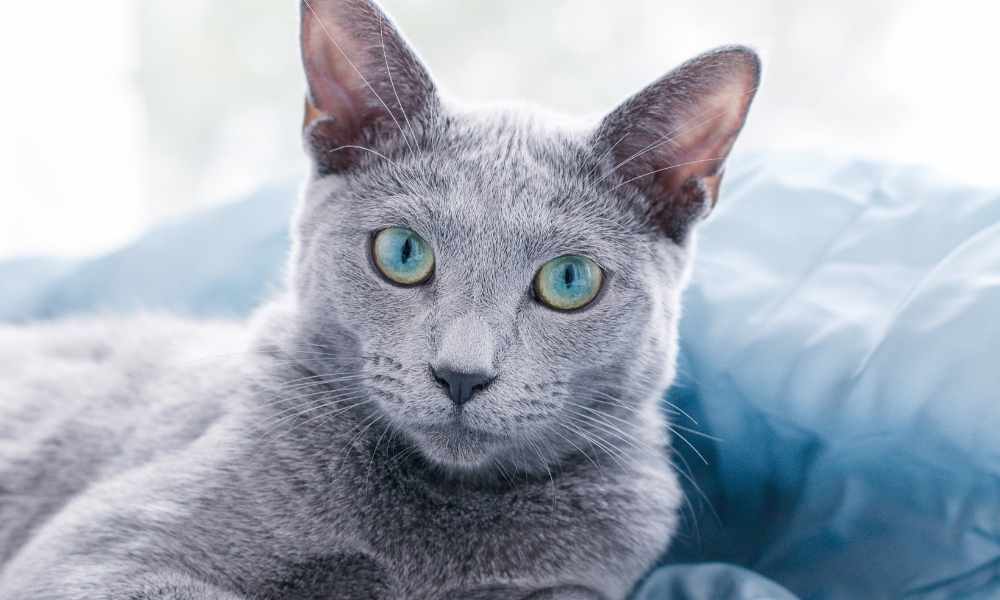 Russian Blue cats have a very distinct look. Their features are so refined that their required characteristics can fit onto one page within the CFA’s standard sheet. Green eyes, a wedged face, and graceful body make the Blue stand out among cat breeds. And that’s not even mentioning their beautiful, plush blue coat!

Russian Blues are fine-boned, with long, firm, and muscular bodies. They’re often described as small and graceful, weighing between 7-15 pounds. They are 10 inches tall, with a long tail.

The Russian Blue has a smooth, wedge-shaped head. According to the CFA, their muzzles are blunt with a long, flat profile. Their eyes are set wide apart, as are their ears. Their head sits upon a long, slender neck and high shoulder blades.

The Russian Blue has vivid green eyes. It’s one of the first things people notice about this breed’s striking appearance!

Their translucent ears sit far apart on the head. Wide at the base, the ears always have pointed tips.

Like their slender and muscular bodies, the Russian Blue has long and fine-boned legs. Their paws are small and slightly rounded. They have five toes in the front, four in the back.

Russian Blue cats have a short, dense, and plush double coat. It stands out from their body due to the density. Their distinct fur only comes in one color: bright blue. Their guard hairs are silver-tipped, giving them a sterling coat. There should be no tabby markings, and the fur should have a definite contrast between the ground color and tipping. Their nose is always slate gray, and their paw pads are lavender, pink, or mauve. And their eye color is always green.

How to Care for a Russian Blue Cat

This glorious kitty doesn’t require any extra grooming. Of course, we recommend weekly brushing to avoid excess hairballs and extra shedding. Like all cats, Russian Blues can benefit from daily tooth brushing, which keeps them safe from dental problems and teeth rot. You should also clean their ears with a vet-approved wipe, removing wax and dirt.

To keep Russian Blues comfortable, make sure you have cat trees and cat shelves. Having these extra spaces in your home will ensure that your cat feels safe and calm. It not only gives them a space to relax and have some alone time but also keeps your furniture safe when they feel like giving something a scratch.

It would be best if you also kept your Russian Blue indoors. As a timid cat, being outside can be overwhelming. They can easily fall victim to feral cats, dogs, predators, and cars. Their unique look may also attract catnappers.

The Russian Blue is a generally healthy cat breed that doesn’t carry many genetic issues. Still, it’s best to take your cat to the vet regularly to ensure their health.

Russian Blues are at risk for cat flu, a common upper respiratory infection. The symptoms are similar to the common cold in humans and may include a runny nose or eyes, sneezing, coughing, or fatigue. Your cat may also develop ulcers in their mouth or around their eyes.

Russian Blues love to eat. They will often ask for seconds. But, a Russian Blue cat can easily become overweight — even obese.

It’s essential to avoid overfeeding your Russian Blue. Instead, try an automatic feeder. This tool allows you to give them their recommended daily intake throughout the day so they don’t scarf it all down in the morning (and then spend all day begging for more).

It’s crucial to make sure their diet includes high-quality cat food. Ensure the dry food you pick has protein as the first ingredients, including meat sources like chicken and salmon. Healthy food should also have taurine, an amino acid that cats don’t produce on their own.

The food you provide should also be low in carbohydrates. These are called “fillers” because cats don’t require them in their diet. They are also the lead source of food allergies and obesity in domestic cats.

An alternative to kitty kibble is wet food, which has more water and fewer carbs. This can be beneficial to cats, who often don’t drink enough water. Your Russian Blue may also enjoy natural, vegan, non-GMO treats. Providing them with healthy treats with CBD can help calm them.

The Russian Blue cat is a bit timid, a bit shy, and very reserved. While they aren’t as outgoing as other breeds, the Russian Blue is still generally good with kids, especially ones that are a bit quieter. They enjoy a good cuddle and pet, as well as playing fetch. This can make them good companions for well-behaved kids.

Russian Blues are not good with louder pets, even other cats. They are quite shy and hate loud noises. When you bring in new pets, you’ll need to take the proper time introducing them. It may take a while before the Russian Blue is comfortable around other cats. They will also become used to new dogs in the home, but they are more tolerant of calmer, quieter breeds. 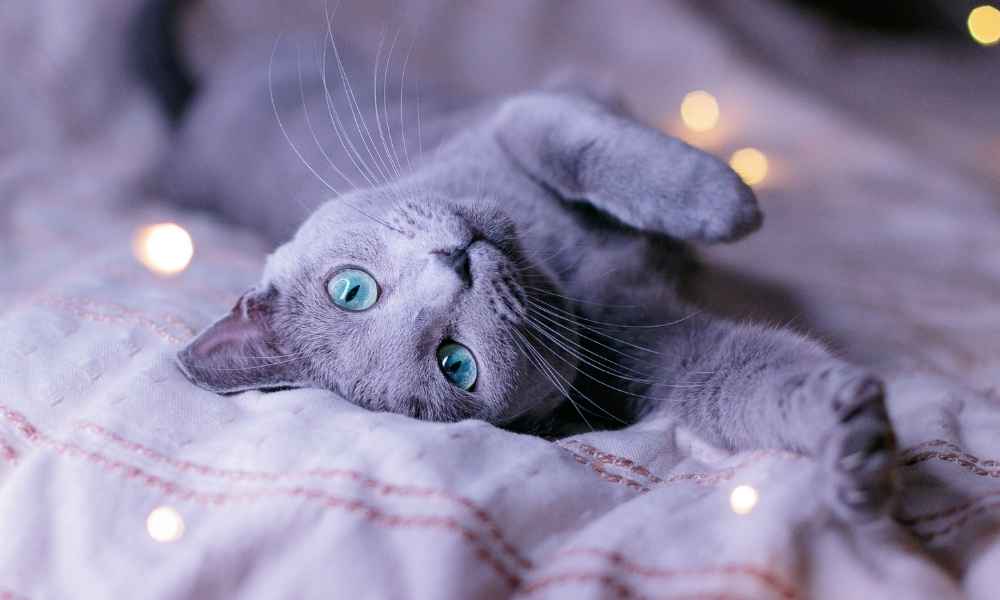 This breed has multiple names and multiple legends. With such a mysterious background, it’s no wonder there are so many stories about this beautiful breed. According to folklore, Russian Blues stalked chambers of newborns to chase away evil spirits.

Russian Blues can cost around $400 to $600 on average. Their unique look, which makes them so desirable, results from a diluted gene. The gene, a form of the black-hair gene, is responsible for their special blue-gray coloring.

While it’s undeniable that the Russian Blue is beautiful, they’re also rumored to be a hypoallergenic cat. While this trait would make them even more appealing, it’s not 100% true. Russian Blues have lower levels of Fel d 1, the protein found in cat saliva and skin secretions. That’s what causes allergies, not fur. But while they have less Fel d 1, Russian Blue cats still produce enough to cause irritations.

Even though they’re not hypoallergenic, Russian Blues are still great pets. They love cuddles and affection and just quietly looking out the window when you’re working. This is a gorgeous breed that has an equally beautiful personality.