Ever wanted a mini cheetah in your home? The Savannah cat is the largest domestic cat breed in the world and has many characteristics of wild cats, from its lanky body, spotted and striped face, panting mouth, and even its louder than normal hiss! This is a cat with an abundance of attitude and energy, making them a great addition to families looking for a playful and one-of-a-kind feline to spice up their daily routine.

This is a controversial cat breed that started in the United States. People started breeding domestic cats with Servals in the 1980s to create this one-of-a-kind feline.

Judy Frank, a Bengal breeder out of Pennsylvania, was the person who created the first Savannah cat breed. In the 1990s, Patrick Kelley and Joyce Sroufe developed the breed further, using offspring of the first hybrid cross.

The African Serval Cat is a medium-sized wildcat with large ears and plenty of spots. They, unfortunately, have been bred in captivity since the 1920s. While definitely a wild species, people have always been drawn to this big cat because of their ability to purr, meow, and make high-pitched chirping noises. 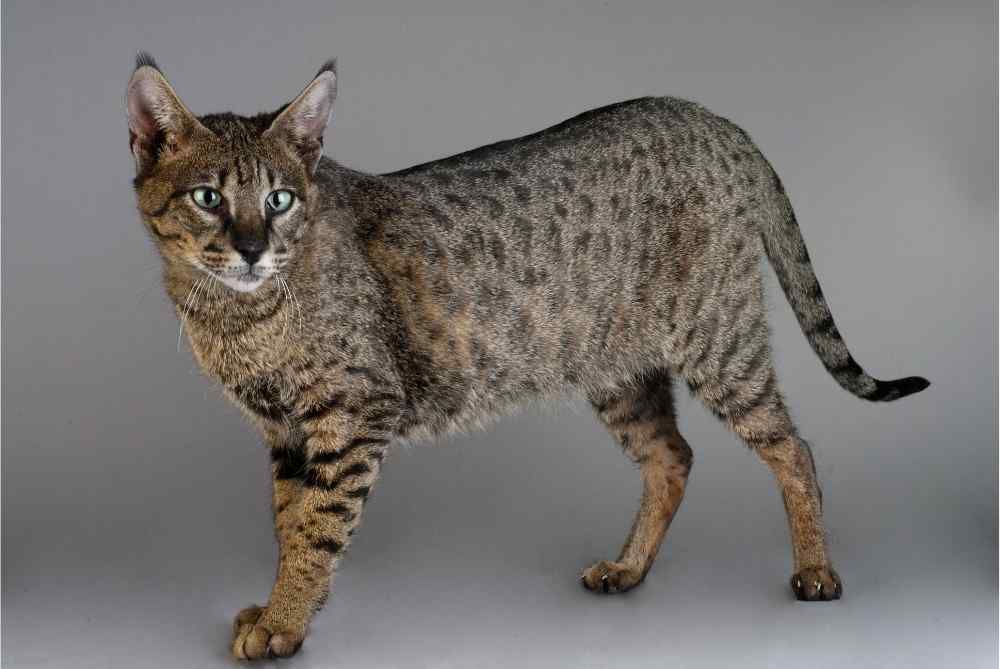 Purebred Savannahs can be shown at The International Cat Association shows. They were approved for championship status in 2012, which is quite recent. TICA now states that no new Serval Cats can be registered for use in an “F1 Savannah” program.

Savannah cats come in generations, which represent the number of pairings the litter is removed from the Serval Cat. An F1 Savannah cat is half domestic cat, half Serval. The next generation is F2, followed by F3. Purebred Savannah cats are the litter after F3.

The purebred Savannah cat is a lot more similar to a domestic housecat and is considered very important for locking certain Serval traits into the breeding line. Male Savannahs are also infertile until the sixth generation. The majority of Savannah cats up for adoption have less than 10% exotic heritage. 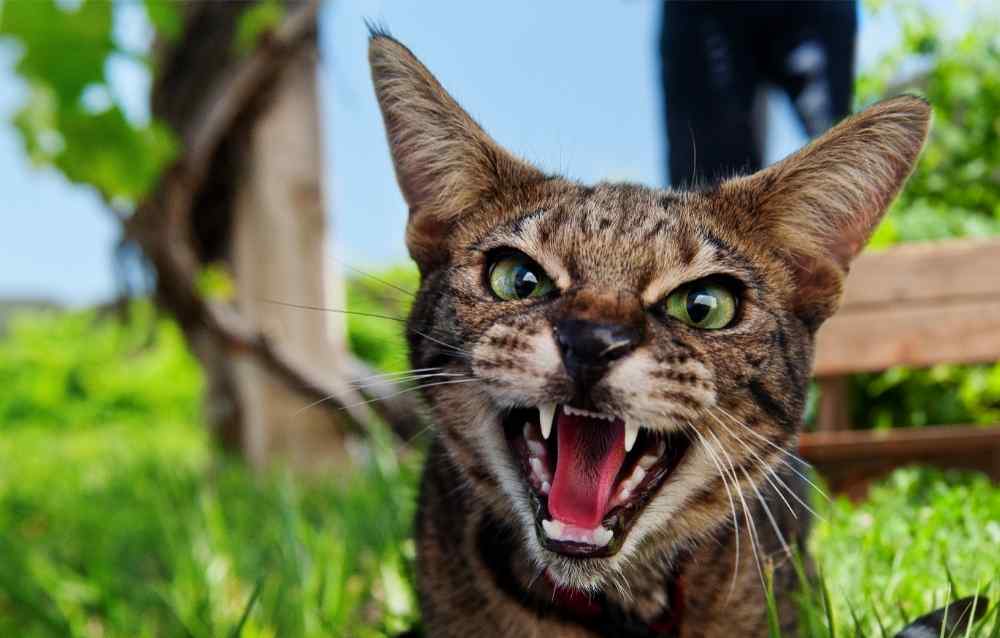 The Savannah cat is unsurprisingly energetic. This is a cat that needs a lot of exercise, whether it’s playing games with you or running on a cat wheel. When trained from kittenhood, the Savannah kitty also enjoys taking walks with a leash and harness.

Savannah cats need a lot of socialization as a kitten. Expose this breed to your friends and family, as well as other pets, early on. When they get the right amount of interactions, the Savannah is known to be sort of dog-like — passionately loyal, playful, and always looking to be involved with what you’re doing. They may be a bit skeptical of strangers at first, but can’t really hold back their curiosity after a while.

Savannah cats are known to be very intelligent. When paired with their curiosity and high energy level, Savannah cats can often find themselves in a lot of trouble. You’ll find them digging through your drawers or making a scratching post out of your couch if they get too bored.

They thrive in an attentive household where they aren’t left alone too often. While the Savannah loves adoration — and petting — they aren’t lap cats. They are more likely to hang out beside you on the couch rather than curling up on top of you.

The first thing you notice about the Savannah is its size. They’re long, lean, and have lengthy legs that almost double the height of the average housecat. You will also notice the markings — a striking orange-yellow coat with large black spots, stripes going down its legs and tail. And then there’s its wild cat face! 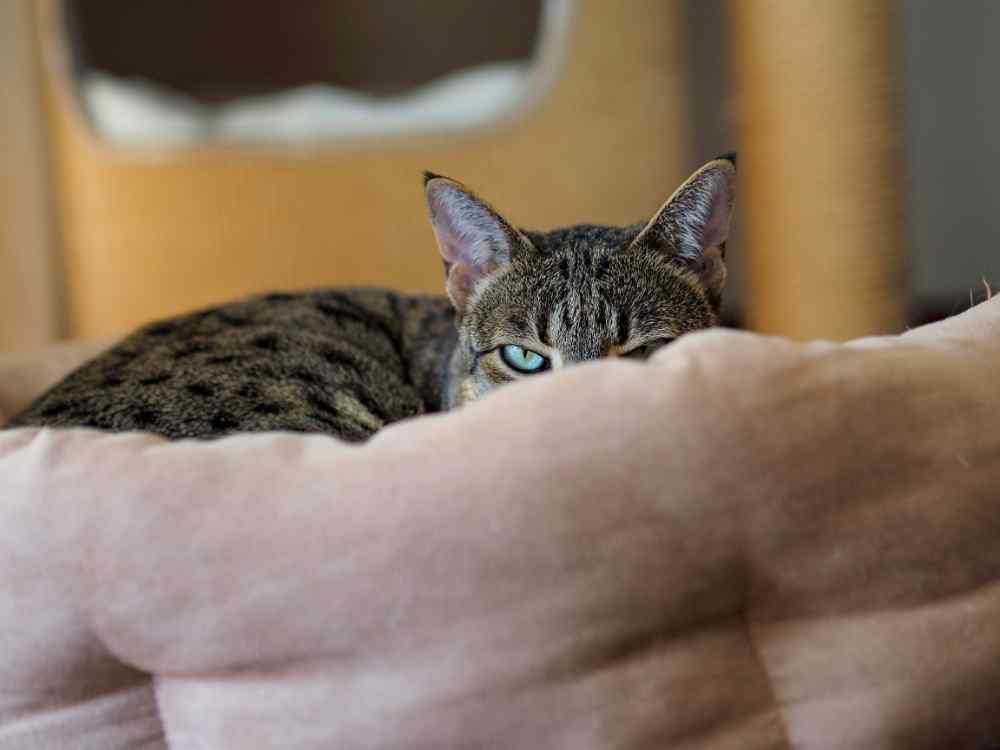 The Savannah can weight up to 25 pounds depending on the generation, easily making it the biggest domestic cat breed out there. An F1’s average height is a little over 16 inches. A regular housecat is almost 10 inches tall. An F2 can weigh up to 16 pounds and reach about 15 inches in height. An F3 is a little over 14 inches and 15.5 pounds. An F4 is 11 inches on average, and so on.

The Savannah’s head should be broad with rounded contours. Their nose is distinctly long, giving them the narrow face of their wild cat ancestors. The dark lines go from the tip of their outer eye to the back of their head give an even more wild impression.

But it’s the Savannah’s ears that really reflect their big cat lineage. Just like the African Serval Cat, the Savannah cat has large ears — the largest of all domestic cat breeds — set noticeably high on their head.

They have rounded tips and the “ocelli” marks on the back. Used as a line of defense for Serval Cats, the markings are only for show on the Savannah. The more contrast they have, the better.

Just like a lot of the Savannah’s features, their coat pattern was created to resemble that of the African Serval Cat. The Savannah cat has dense, short hair that can either be coarse or soft. Acceptable coat colors are brown, silver, black, and smoke.

The most common Savannah color is light gold with dark black spots. The only coat pattern that TICA accepts for this cat breed is spotted. The spotted pattern consists of solid, dark spots that are either round or oval. They should flow throughout their torso and never touch. The Savannah also has a lot of stripes, one that starts on the back of their head and trails over their back.

How to Care for a Savannah Cat

The Savannah cat is very, very active. Since you will want to keep your Savannah cat inside to avoid infectious disease, dog attacks, and catnappers, you’ll need to ensure that your cat has enough indoor activities to keep them happy, healthy, and occupied. One solution is a cat wheel, which allows them to run as fast as they please in a controlled environment. Just make sure the cat wheel can handle all 25 pounds of them!

This hybrid feline is endlessly curious. You’ll need to ‘Savannah-proof’ your house to keep them safe. Before you bring your Savannah kitten home, make sure all electrical cords are hidden. Any that are left exposed, spray “Bitter Apple” or vinegar to discourage your cat from chewing them.

Be sure to hide all plastic bags, another chewable item that can harm a Savannah. To avoid intestinal blockage, keep rubber bands, chewable rubber toys, plastic wrappings, string, and small plastic objects out of reach. This may mean keeping them in a drawer with a baby lock. This should be done with medications as well.

Since Savannah cats are known to easily access most surfaces in your home, make sure there aren’t heavy objects anywhere they may climb. You can expect vases and other valuables to eventually be shoved off the edge of the counter or table, too!

Savannahs have very short fur, but you can still brush them weekly to avoid excess shedding, possible hairballs, and to keep their fur sleek and healthy. Brush their teeth with vet-approved toothpaste once a day — or once a week — to ensure good dental health. You should also check their ears periodically for dirt and wax buildup. Like most domestic cats, the Savannah cat shouldn’t need bathing. 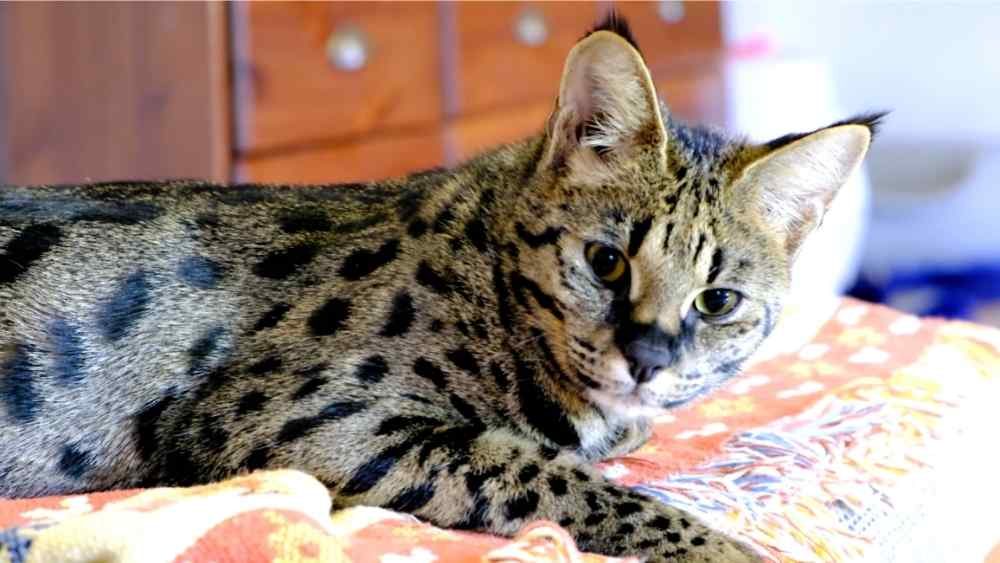 This unique cat breed can live anywhere from 12 to 20 years, depending on the generation. The Savannah cat has no known health issues related to the breed, but they are susceptible to the same issues all domestic cats can get. Always make sure to schedule regular vet visits to make sure they are healthy and don’t have any infections, diseases, or pain.

Even though the Savannah cat is noticeably larger than the average domestic feline, this breed has very similar dietary requirements. You should avoid cheap cat food brands, which often rely heavily on “filler” carbohydrates and don’t provide the right nutrients for any cat. Instead, look for brands with the right amount of protein and taurine.

You can also try a balance of dry and wet food, which will give your Savannah the right amount of moisture and meat to thrive. It’s very important for your Savannah to have a balanced diet with proper nutrition because they grow at a very fast rate. The right amount of proteins, taurine, and vitamins will ensure that they develop into the large, healthy cat they’re meant to be.

F1 generation Savannah kittens may need bottle feeding to ensure that they bond with humans properly. A lot of Savannah breeders also recommend a raw diet of flesh, organs, a bone or ground bone, and a small amount of vegetation. This could require a bit more experience and knowledge of exotic breeds.

The Savannah cat may look imposing at first, but they’re known to be quite friendly. They get along with just about any pet and enjoy spending time with children.

The F1 and F2 Savannah might be a bit put off by a dog since they are a bit more of an independent animal who may be more territorial than the average cat. But an F3 Savannah is often described as having a similar temperament to a dog, meaning they’ll definitely have a good time playing and bonding with them.

It’s a similar case with children. An F1 Savannah will need to be introduced to children at a young age so they can learn how to properly interact with this pint-sized human. 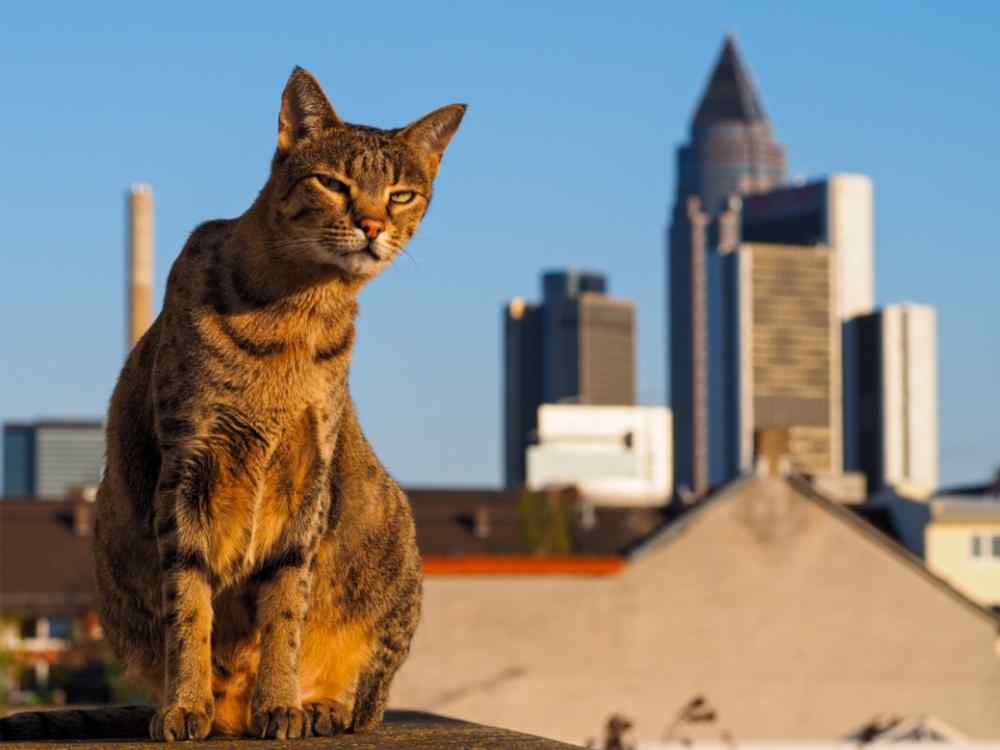 We mentioned that the Savannah is tall. But did you know this breed has held the Guinness Book World Record for the world’s tallest domestic cat since 2006? Some owners also claim their Savannahs can jump up to eight feet in the air.

They may also hold the record for the most expensive cat breed. An F1 Savannah cat can be $16,000 or more since the females are often kept for breeding due to their low fertility rate. There’s a 50% chance an F1 and F2 female will reproduce. F3 Savannahs usually go for around $2,000 to $3,000. Purebred Savannahs go for $1,000 or more!

Before you shell out the cash for this exotic pet, keep in mind that there are some states with restrictions on this breed. This includes Alaska, Delaware, Georgia, Idaho, Iowa, New York, Nebraska, New Hampshire, Massachusetts, Rhode Island, Texas, Vermont, and Hawaii. Look into your state’s regulations and bills regarding hybrid cats.