At first glimpse, the Selkirk Rex looks like it just got in a fight with a curling iron and lost. Their messy, fluffy curls are quite a sight! And they’re all-natural! The Selkirk Rex was born to be a soft, curly-coated cat, often compared to a stuffed animal or lamb. But it’s not only their fur that’s lovable and pure.

The Selkirk Rex cat is one of the most loving cat breeds you’ll ever meet. Quiet and sweet, the Rex is content to curl up on your lap while you read, lounge, or play video games. This cat always wants to be by your side, on your lap, or over your shoulder. While they may look exotic and, let’s face it, a little weird, the Selkirk Rex is a homebody at heart. They are docile cats that love nothing more than spending time with their favorite humans. Read on to find out how this strange-looking cat came to be and learn more about just how sweet the Selkirk Rex truly is.

The Selkirk is the newest Rex in the cat fancy! It all started when a cat lover named Kitty Garrett Brown had a particular litter of kittens enter her animal shelter in Montana. One of the kittens had a curly, plush coat that reminded her of a stuffed animal.

In 1987, a volunteer at the Bozeman Humane Society, Peggy Voorhees, brought the unique kitten to Jerri Newman, who owned the Noface Cattery. The curly kitten immediately caught Newman’s attention with a blue-cream-and-white coat and striking green eyes. She described the kitten’s fur as “lamb’s wool.” 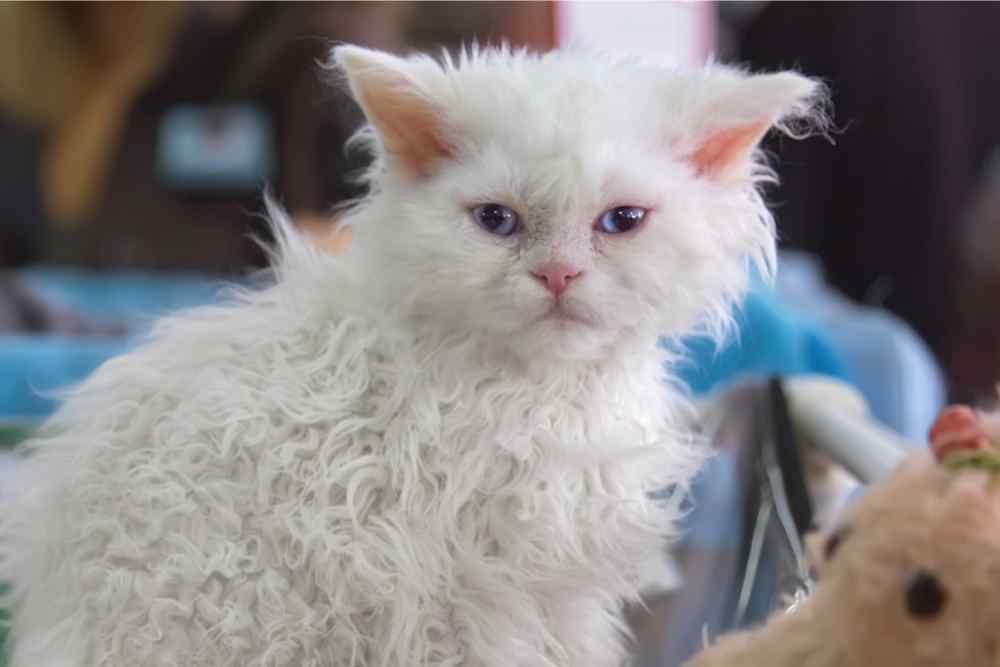 The plush kitten, about ten months old, had curly whiskers and a perm-like coat. Newman called the kitten Miss DePesto because the social kitten was always “pestering” her for attention.

When Miss DePesto became an adult, Newman bred her, producing a litter that boasted 50% curly coats. It was determined that the curly coat was a dominant trait (only one parent needed the gene to pass it on).

Newman decided to name the cats Selkirk Rex, inspired by her stepfather. Originally a Persian cat breeder, Newman couldn’t help but be fascinated by this new breed’s unique genetics. Confident with the Selkirk Rex, Newman presented the cats to The International Cat Association in 1990.

TICA’s board of directors accepted the Selkirk Rex into the New Breed and Color class. The Cat Fanciers’ Association welcomed the curious kitties for registration in the Miscellaneous class two years later. Then, in 1998, the Selkirk Rex advanced to CFA’s provisional status. By 2000, the curly cat achieved the CFA championship status.

There’s no denying the Selkirk Rex’s unique look. But this breed is steadily becoming popular amongst cat lovers because of its winning personality. This people-oriented cat is known for being loyal and loving. They always want to spend time with their favorite person!

Of course, this isn’t a cat that does well in isolation. Without human interaction, the Selkirk Rex can become sad, lonely, and anxious.

While Selkirk Rex are social cats, they aren’t particularly pushy. They are affectionate when given attention and cuddles, but if you’re busy, the Selkirk Rex will patiently watch the activities from afar.

Selkirks are mellow cats that love nothing more than hanging out nearby their favorite human. They are fine lounging in a nearby chair if they know they’ll get some cuddles eventually!

While usually pretty docile, the Selkirk Rex does have a playful side. They have goofy personalities and enjoy entertaining you. They will happily race down the hall after toys or show off their acrobatic side when you shake a ribbon above them.

The Selkirk Rex is a newer breed that’s still being developed. The goal? A curly-coated cat with a heavy-boned body like the British Shorthair. That means the Selkirk has a round head and large body. Of course, their most striking feature is the curly fur, which can be short or long.

This is a medium-sized breed that’s between 6-16 pounds. The Selkirk is described as “well-balanced.” They have a rectangular, muscular torso with a straight back. Their tail is also balanced and proportionate. It appears heavy at the base and is medium in length.

This cat has a round and full-cheeked head, with a medium-sized muzzle and well-padded whisper pads. Altogether, their face has a square look, with a firm chin. Their ears are medium in size, broad at the base.

The Selkirk Rex has large, rounded eyes set wide apart. Their wide, slanted eyes give them a sweet expression. Much like the British Shorthair, they might appear like an innocent stuffed animal — curious and kind.

This breed has medium to long legs with substantial boning. Their feet are large and round. They have five toes in the front and four on their back feet.

The Selkirk Rex’s curly coat can come in any color or pattern. They also come in short and long hair. Both lengths are in a separate division, meaning they are judged differently from each other.

Longhaired Selkirk Rex cats have a full, soft curly coat that’s described as dense. The fur is “random and unstructured,” with loose individual curls. Sometimes the coat appears clumped, with some areas appearing more curly than others (like the neck, tail, and belly).

The shorthaired variation of the Selkirk Rex is plush, soft, and curly. Their coat is also dense, not lying flat to their body. Rather than an entirely wavy appearance, the shorthaired Selkirk also has curls appearing in unstructured clumps.

When cared for properly, the Selkirk Rex lives about 13 years.

The Selkirk Rex carries certain hereditary genetic conditions, which is the case for most purebred cats. Here are some of the most common:

This disease starts with cysts on the kidney and can lead to kidney failure. It’s most common in Persian and Exotic cats, including the British Shorthair.

Hypertrophic cardiomyopathy is a common heart disease present in the Rex bloodline. If you adopt from a responsible breeder that screens their cats for this condition, it’s less likely that your cat will inherit HCM.

Hip dysplasia is another common problem Persians have. Since the Persian is in the Selkirk Rex’s background, it’s also a condition many Rex can carry.

Always adopt a cat from a reputable breeder registered with an association like the Cat Fanciers’ Association. Responsible breeders will screen for these common diseases, eliminating them from the breeding line. They will also provide health guarantees for kittens.

Because of the Selkirk Rex’s unique coat, some grooming is definitely required. Their fur is dense, meaning you’ll have to brush them a couple of times throughout each week to prevent tangles. Brushing and combing your Selkirk Rex will also minimize shedding by removing dead hairs.

Brush your cat’s teeth daily to prevent periodontal disease. Weekly brushing is also adequate to prevent dental complications. You can also check their ears for any wax or dirt buildup. Use a vet-approved wet wipe to gently remove anything you see.

It’s very important that you keep your Selkirk Rex inside. This will prevent them from catching diseases from feral cats. It also protects them from predators, dogs, and cars. The Rex is also a unique-looking cat that may catch the wrong person’s attention, leading to a cat-napping incident.

The Selkirk Rex has a rounder appearance, but that doesn’t mean they should be overweight or obese! If your cat seems heavier than the regular 6-16 pounds, they may be overeating.

To remedy this problem, try installing an automatic feeder. This will space out your cat’s meals, ensuring they get the right amount of food each day without them overeating or begging for more food if they scarf it down too fast.

Another thing to avoid is cat food heavy in carbohydrates, including wheat and corn. These ingredients are often called “fillers.” That’s because cats don’t need them in their diet. In fact, fillers are often what make cats overweight or develop allergies to their food.

A healthy alternative is a wet food. Canned food has no carbohydrates. Instead, it’s made of over 70% water. Wet food is a great way to give your cat the liquids they need to ensure they don’t become dehydrated. 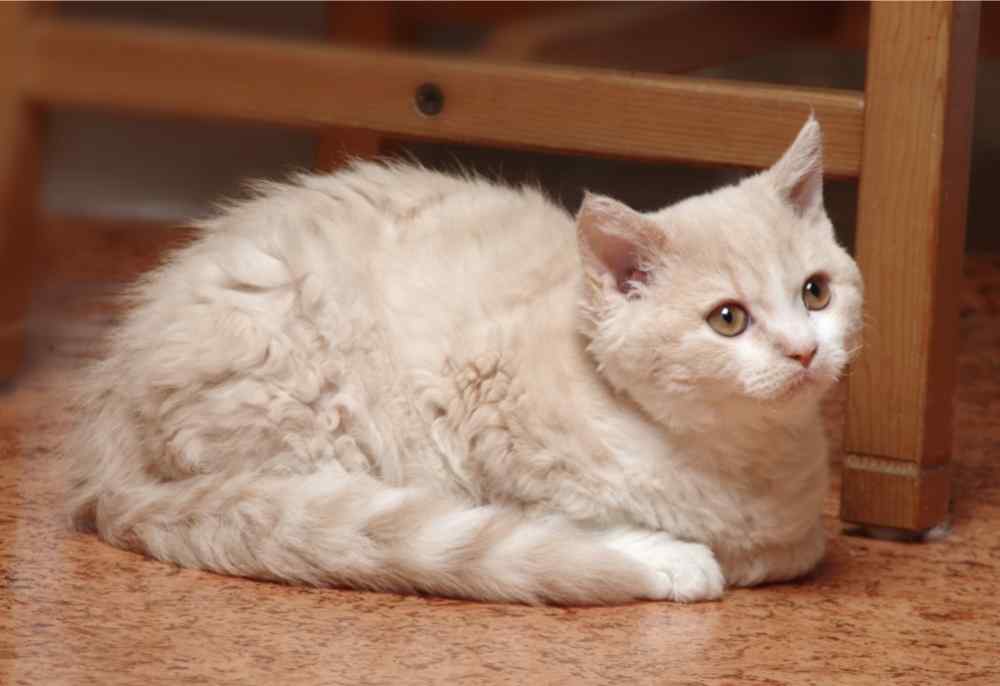 The Selkirk Rex is a very docile cat that gets along with just about everyone! That includes other pets. It’s quite common for people to get a feline companion for their Selkirk Rex.

Just make sure to introduce them properly and patiently if you don’t adopt them at the same time. Cats can become stressed if a new cat enters their territory.

Start by putting the new cat in its own space with its own litter box, food, water, and bedding. Occasionally switch the new cat’s bedding with the Selkirk Rex’s so they can get used to each other’s scent.

Selkirk Rex cats also get along with dogs (if the pooch is well-behaved). They are playful and will enjoy having a canine counterpart to run around with. They will love chasing toys together. Just make sure you supervise their interactions in case the dog gets too aggressive with the docile Selkirk Rex.

Children are also great playmates for the Rex. The Selkirk Rex cat is gentle and kind, making them perfect cuddle buddies for younger kids. But just like with dogs, always watch how younger children interact with the Rex. They may be tempted to pull the cat’s curly hair, which is delicate.

You knew that the Selkirk Rex’s curly fur is all-natural. But did you know that some Rex kittens don’t appear curly at birth? Some cats in the litter may not get their curly coat until they mature through adolescence. But even the late bloomers will have curly whiskers at birth.

Unlike other Rex breeds, the Selkirk Rex is completely curly — hence the whiskers! They also have three layers to their coat, something no other Rex breed has.

Because of their unique looks, the Selkirk Rex can cost you up to $1,500! But you’re not only paying for those fabulous curls! You’re paying for a lifetime of love and loyalty. This is a cat that will never want to leave your side. And what’s better than cuddling with a cat on the couch? Cuddling with a soft, curly-coated cat on the couch, of course!