So you’ve been browsing Instagram, Facebook, or your favorite news blog, and you stumble upon something unbelievably…cute. They’re tiny, adorable, and the perfect size to hold in your hands – they’re short legged cats!

Can Cats Have Short Legs?

Absolutely! They’re not the product of some photoshop magic; short legged cats are real, and they’re not kittens – they’re actually full-grown felines! This means that short-legged cats will actually stay this cute!

Nowadays, there are several lovable cat breeds that are naturally born with short legs, but they all can be attributed to a single cat breed: the Munchkin cat.

Short-legged cats have been around as early as the 1940s. The first officially documented case was in 1944 when a British veterinary report took a special interest in four generations of short-legged cats. The report noted that they were pretty similar to normal cats, except for their short legs.

However, the line of documentation was lost during World War II; nevertheless, we can presume that this adorable breed lived on. During this time, there were rumored sightings of short-legged cats in Russia in 1956 and in the United States in the 1970s.

The breed didn’t officially emerge again until 1983, when Sandra Hochenedel, a music teacher in Louisiana, found two pregnant cats hiding under a truck. She ended up keeping one of the cats and named her Blackberry. But when Blackberry had her litter, she was pleasantly surprised to find that half of the kittens were born with…yup, short legs! Sandra gave a short-legged male kitten to her friend, Kay LaFrance, and the rest is history – the Munchkin cat breed was born!

The breed was first introduced to the public in 1991, but it wasn’t until 1994 that it was officially recognized as a breed by The International Cat Association (TICA). Although the Munchkin cat is a relatively new breed, it didn’t take any time to capture the hearts of cat lovers everywhere. 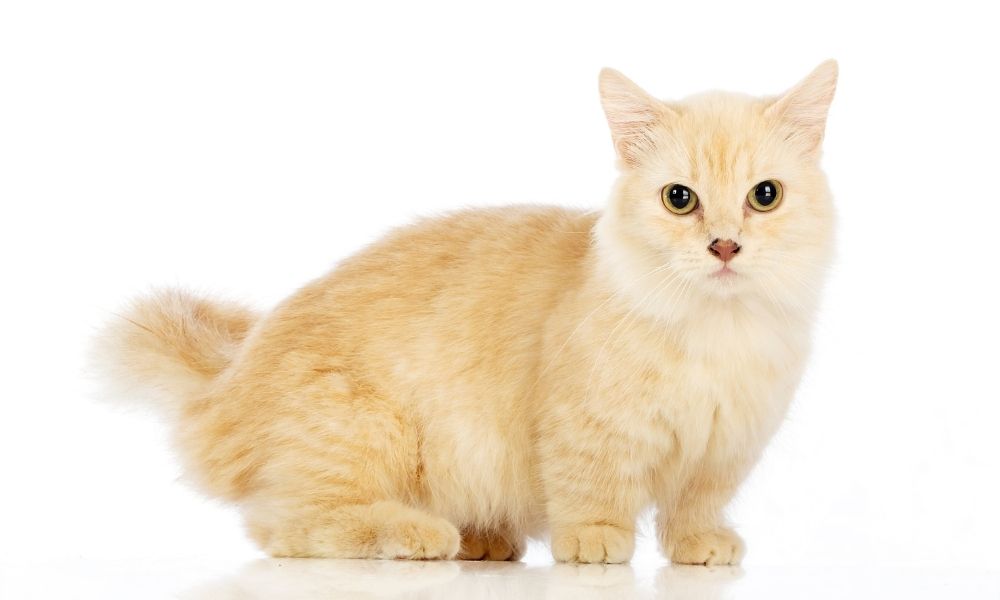 Yes, those little leggies can jump! Maybe not quite as high as other cats, but there is some spring in their step. Also, in case you’re wondering, the short legs do not hinder their running either.

Are There Health Concerns for Short Legged Cats?

Because the breed has only been around a few decades, the health implications of short legs are inconclusive. There was speculation that Munchkin cats would have spine problems (like other short-legged dogs), but so far, there hasn’t been any indication of that. In fact, x-rays of older Munchkin cats revealed no sign of joint, bone, or spinal problems.

However, you should be aware that the short legs are a result of a genetic mutation called achondroplasia. This mutation causes dwarfism, which has some health conditions associated with it, including:

Additionally, because Munchkin cats tend to have decreased activity because of their short legs, they sometimes develop osteoarthritis, which results in joint pain and stiffness. But as long as you encourage activity in your cat, they should be fine!

Here are the best known breeds of short-legged cat:

You have to respect the original, the mother of all other short-legged cats…the one and only Munchkin cat! They are small to medium cats that weigh between 4 and 9 pounds. They’re known for being friendly to people and intelligent.

They come in a variety of coats and colors – ranging from short to medium-long hair, plush coat to silky, and a bunch of different colors and patterns.

The defining characteristic of Munchkin cats is obviously their adorable short legs. This gives them an elongated appearance, which led people to also call them “sausage cats” (they’re the cat equivalent of the “wiener dog”). They’re also quicker than you think; the short legs bring them closer to the ground, making them surprisingly agile around corners!

The hind legs of a Munchkin cat are actually a bit taller than their front legs, which results in a slight rise in their torso. Also, their legs can be slightly bowed, which just adds to their cuteness.

With a playful and confident personality, cute little legs, and a curly coat, the Skookum cat is also referred to as the Shirley Temple of cats. They are a cross between a Munchkin cat and a LaPerm cat – a breed famous for its intelligence and charming curly hair.

Traits from both breeds can be clearly seen in the Skookum cat. They are perfectly pocket-sized and typically weigh only 3 to 7 pounds. Their coat has the clearly identifiable curls of the LaPerm and a light and airy texture that’s soft to the touch. However, it’s their tail that really stands out; it’s puffy and has the look of a lush and luxurious duster.

The short and regal Napoleon cat (named appropriately after Napoleon Bonaparte) was first developed in 1996 as a cross between a Munchkin and a Persian cat. This gives them the adorable short stature of Munchkins combined with the lovable iconic look of Persian cats. However, they do not have the flat nose of Persian cats, which can be a good thing because they avoid the accompanying respiratory problems.

Napoleon cats, also known as Minuet cats, have playful and active personalities and enjoy spending time with humans. This makes them particularly good cats for families with children.

With round eyes, large alien-like ears, and an irregular coat, the Minskin cat may not even look like a cat at all (E.T. anyone?). But it is! A Minskin cat is a cross between a Munchkin and Sphynx, with a touch of Devon Rex and Burmese.

It has the short stature of a Munchkin cat, but other than that, the Minskin is completely unique. Most notably, their coat is made up of different lengths fur. The fur is generally sparse all around, but it gathers at denser “fur-points” around the mask (face), ears, legs, and tail. This gives their coat an inconsistent look. Also, its tail is actually longer than its body, which adds to their out-of-this-world look.

Despite their strange look, Minskin cats have a sweet and friendly personality, require little grooming, and are generally healthy. 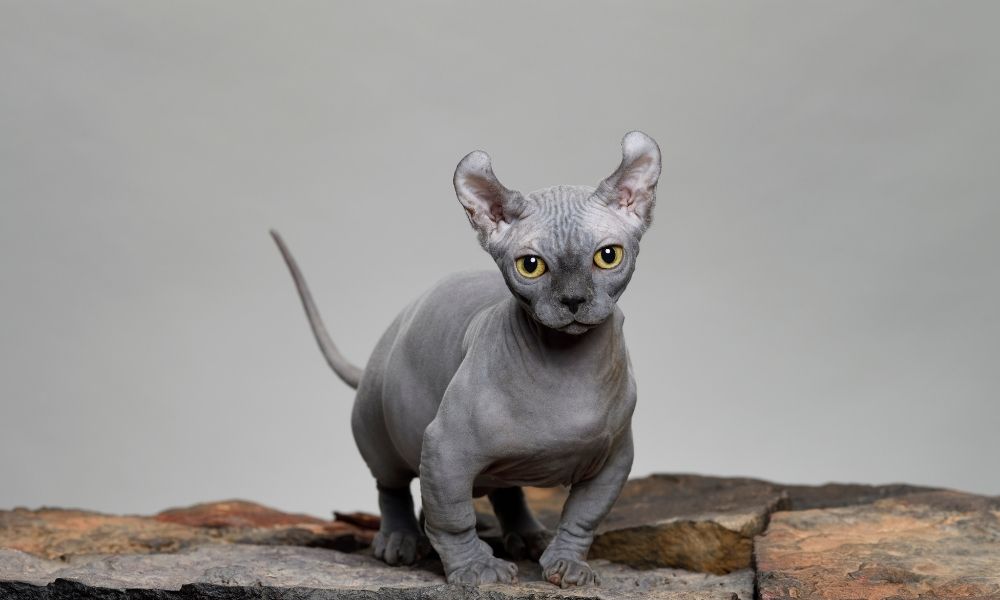 The Dwelf cat is another otherworldly looking short-legged cat that exhibits attributes of a dwarf and an elf – hence the name “Dwelf.” They are a cross of a Munchkin, American Curl, and Sphynx, making a cat with short stature (like a dwarf), curled ears (like an elf), and the hairless body of a Sphynx cat.

The Dwelf cat is very small (weighing an average of 4 pounds) and is actually not completely hairless. They have very thin, short hair, similar to peach fuzz. Also, if you’re interested in a Dwelf cat, be aware that they could have some skeletal problems; so, it’s a good idea to get one from a reputable breeder who screens for health issues in the parents.

They’re not only known to have a unique look and cute stature! Dwelf cats also have very playful personalities – almost like dogs! This makes them a great choice for young couples or families with children.

It’s not movie magic or digital editing – short-legged cats are very much real! They started with the Munchkin breed, but since then, many breeds with adorable, tiny legs have been introduced.

Although each breed has its own distinct look and personality, they’re all friendly, playful, and great family pets. On top of all that, they’re small, fast, and their paws go pitter-patter as they run…honestly, what’s not to love?