If you’re looking for a big, burly cat with a loving, gentle disposition, look no further than the Siberian cat. This cat breed is becoming more and more popular in the United States thanks to its gloriously majestic coat, friendly face, and kind personality. They love cuddling in your lap and being carried just as much as they love chasing toys down the hall for hours at a time.

Siberians have been around in Russia for a long time and are actually the national cat! This ancient feline breed was born to survive in the harsh climates of Siberia, but now, they love nothing more than lounging around comfortably in your home, keeping you company throughout the day. Let’s take a look at this beautiful cat!

Siberian cats have a long history in their native Russia. Longhaired cats were said to roam the land for hundreds of years. But how did they come to Siberia?

Siberian breeders believe that Russians immigrating to Siberia brought these longhaired cats with them. These cats included ones with long hair, which may have originated in Russia, Persia, or Turkey. Others believe that the original Russian longhairs were crossed with local cats to create Persians.

There are tales of Siberian cats weighing almost 45 pounds! They were said to be protectors of their families, much like a guard dog would do. However, it’s still unclear if these early cats were actually Siberian cats.

The former Soviet Union discouraged citizens from owning pets until the 1980s. That restriction was lifted in 1987, which led to the rise of these longhaired cats. Cat clubs also started forming, and the first Russian cat show took place in 1988.

By the late 1980s, these large, fluffy cats were gaining quite a following. American breeder Elizabeth Terrell ended up trading four Himalayans for three Siberians in the summer of 1990. Terrell immediately fell in love and sought to bring more Siberians into America.

The Louisiana breeder invested thousands of dollars into obtaining more Siberian cats. At the same time, another breeder, David Boehm, also discovered the beauty of Siberians and quickly booked a flight to Russia. He bought every Siberian cat he could find, and at the end of his trip, he returned to America with 15 cats!

Despite their bulky size, the Siberian is quite athletic! They are incredibly playful, usually going all out when chasing toys or jumping for ribbons. The CFA even notes that rambunctious kittens may need rescuing from their overzealous climbing adventures. As adults, however, Siberians are very agile and make excellent jumpers.

Their energetic nature carries over into an unexpected element: water! Interestingly, Siberians are quite curious about water and will try to turn on faucets or flush toilets just so they can watch running water for fun. You might notice them sniffing around the bathtub after you’ve used it for a shower. Siberian cats might also drop their toys in their water dish.

Cat trees and shelves are great ways to engage your Siberian. They love heights, and providing them with taller structures to climb up will make them feel right at home.

The Siberian loves being around their family. This cat doesn’t fare well when you are away for several hours each day or go on a long vacation. Make sure you spend time with your Siberian every day, whether it’s cuddling together or playing fetch with them.

Siberians also love to be held. They enjoy going from room to room with you since they love feeling like part of every activity. Another one of their favorite activities is sitting on your lap. Groom them or give them some head scratches, and they’ll be content for hours.

Siberians are known for their soft and varied vocals. You’ll hear meows, trills, chirps, or loud purring. When you come home, expect to be greeted by a barrage of adorable sounds from your Siberian! 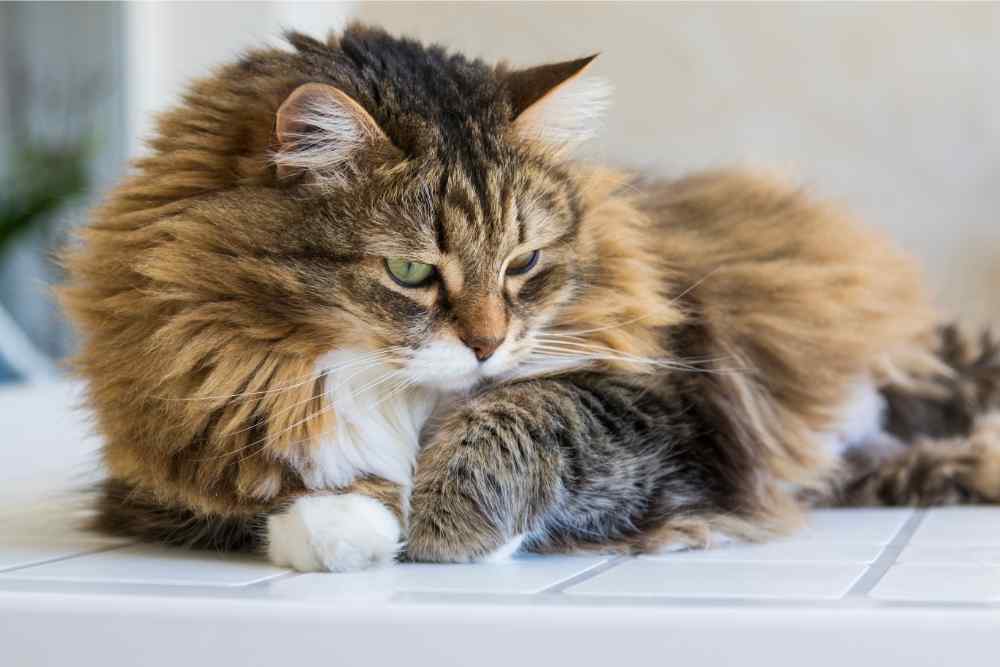 The Siberian spans 17 to 25 inches long and can stand up to 13 inches high at the shoulder. Siberian cats have long, well-muscled bodies. Their torso is barrel-shaped and firm, adding to their weight, while their thick fluff adds more volume to their frame.

The Siberian is a medium to a large cat breed, with females weighing between 12 and 15 pounds and males weighing upwards of 25 pounds. The average cat weighs about 8 pounds, so this is a pretty big kitty!

The Siberian cat’s head is shaped like a modified wedge. It sits upon a sturdy, well-muscled neck. They have a broad forehead and a full-rounded muzzle and chin.

Siberians have medium to large eyes that are pretty round. The CFA states that the eyes should be spaced apart, open, alert, and expressive.

There is no relation between the Siberian’s eye color and their coat color and pattern. The only exception is Siberians with pointed patterns, which always have blue eyes. Otherwise, Siberians can have green, gold, green-gold, or copper eyes. Siberians with white fur may have heterochromatic eyes, meaning each eye is a different color!

The Siberian has rounded ears that are wide at the base. They tilt slightly forward. The fur on the back of their ears is short and thin. Ear tipping is allowed, with long hair covering the ear’s base as well.

The Siberian has medium-length legs with strong bones. Their hind legs are slightly longer than the front legs, while the feet are big and rounded. Toe tufts are highly desired, adding to their fluffy appearance!

The Siberian isn’t a Siberian without that massive fluff! While most cats have single coats, the Siberian has a triple coat. The fur is moderately long, appearing thicker and shorter on the shoulder blades and chest. Although wavy isn’t the breed standard, their fur may thicken to curls on their belly and britches.

Siberian cats come in a variety of colors and patterns. White is allowed in any amount in all areas. While they can have various coat patterns (Tortoiseshell, Tabby, Point, Calico, Lynx Point), the CFA states that a clear pattern is most desirable.

The Siberian cat lives an average of 12 to 15 years old, on par with most cats.

Siberians are generally a healthy cat breed. Always make to buy from a trusted and responsible breeder. Remember to schedule regular appointments with a vet to screen for common diseases found in cats.

FIV is a common condition in stray and feral cats. The best way to ensure your cat doesn’t get this immune-compromising disease is by keeping them indoors as much as possible. Cats with FIV can easily get other diseases and complications, which will cause their health to deteriorate quickly.

Heartworm (Dirofilaria immitis) commonly affects cats that live outdoors. Infected mosquitos will easily be able to get to your cat if it’s outside and give you the parasite. Heartworm can lead to lung disease if not treated, so always discuss preventative measures with your vet.

Upper respiratory infections are quite common in cats. You’ll notice their eyes leaking or nose dripping. If it doesn’t stop or the liquid from their eyes is discolored or dark, your cat most likely has an infection that needs immediate treatment. The bacteria can lead to infections that result in serious breathing issues.

The Siberian most definitely needs some grooming! This is especially true in colder seasons when their undercoat gets thicker. Siberians have three coats: a shorter, dense undercoat, slightly longer middle coat, and the longest outer layer.

You should brush your ˚hair quite regularly to avoid matting and knots. Matting isn’t too common for Siberians, but brushing will ensure all of their extra fluff and dead hair is removed. The dead fur can turn into hairballs if you don’t regularly brush your cat.

In warmer weather, Siberians will start shedding their heavy coat. You might need to brush them even more during this time to make sure that their fur doesn’t get all over your furniture. An occasional bath can also help wash out the extra loose hairs and dander out of their coat.

Remember to check your Siberian cat’s ears for dirt and wax buildup. If it needs cleaning, use a vet-approved wipe to gently remove whatever blockage you see. Other care needs include brushing their teeth to avoid dental complications and trimming their nails when they get too long.

Larger pets usually run a higher risk of becoming overweight or obese. If your Siberian cat weighs over the typical 15 to 20 pounds, they may be overeating. Try proportioning the food out to control their food intake.

Always look for cat food with quality ingredients. Look for natural proteins, like turkey, salmon, or chicken, and avoid unhealthy filler ingredients, like chicken meal. You also want to avoid carbohydrates in cat food, which includes wheat and corn. Carbohydrates are what make cats become overweight or develop food allergies.

A healthy alternative is wet cat food. Canned food often has no carbohydrates or grains. Wet food is a great way to give your cat the liquids and nutrition they need.

Siberians are very friendly and social, meaning they can get along well with other animals. Dogs can often be good pals for Siberians since they are both larger and love to play. You’ll probably notice them running around the house together or playing different games. Just make sure your dog doesn’t get too rough.

Children are also good friends for Siberians. Kids will love playing with the Siberian, watching them do flips and other acrobatics. You can even train them to fetch! If you have younger kids, be sure to supervise closely at first.

Many people also adopt two kittens at the same time to give their cats some company. If you plan to adopt a cat later, the Siberian might be wary of the newcomer. Cats are skeptical of new cats since they can get a bit territorial. You will need to be patient and careful when bringing home a new cat. 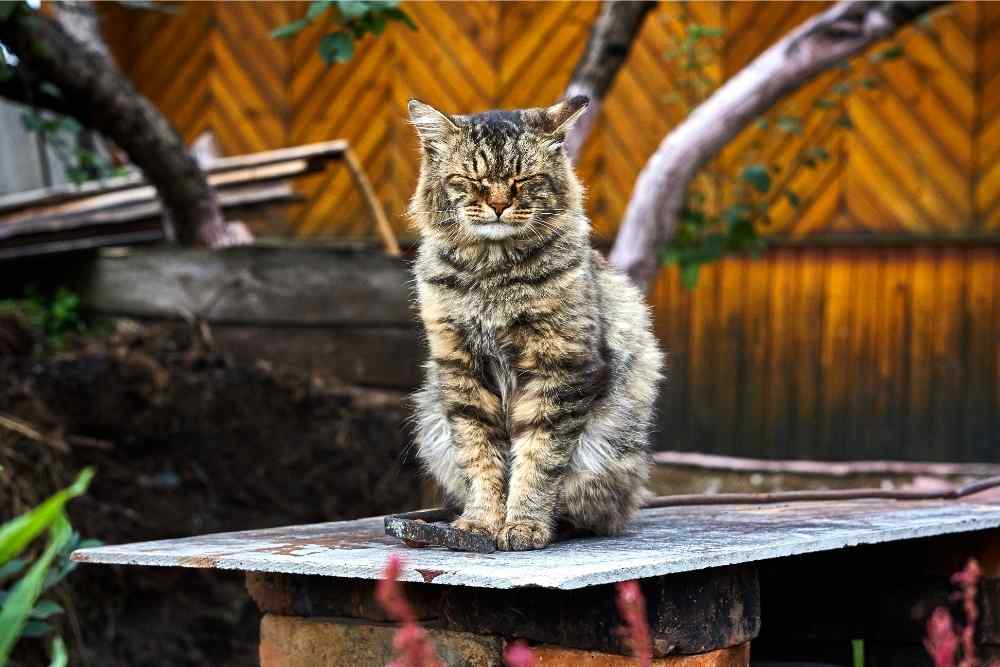 Siberian cats are considered a hypoallergenic breed! They don’t produce as much dander as other cats, which makes them a bit more allergy-friendly to those typically allergic to cats.

Siberians can get quite pricey, even though they aren’t that rare. Some can cost more than $1,200! This price is likely because they are a bit more challenging to breed, and Siberian cats will often only mate with one other cat. The fathers will usually stick around to take part in caring for kittens. While adorable, it takes longer to produce more litters.

The Siberian cat is a loving and social breed that’s playful, charming, and talkative. Siberians will never leave your side, and they’re great with other pets and children! This is a cat you’ll never want to let go of.