Sometimes people describe cats as aloof. Independent. Or maybe loners. But those people have probably not met a Tonkinese cat! This is a social cat that will jump onto your lap the moment you sit down and follow you from room to room, talking to you along the way. Playful, active, and always curious, the Tonkinese is a handful. But families with love to give will find that the Tonkinese is a loyal companion for life!

The Tonkinese is meant to take both of these extreme personalities and combine them into a more palatable cat breed.

A sailor named Dr. Joseph Thompson had a small, dark-brown cat called Wong Mau. It was believed that Wong Mau was a Siamese with chocolate-colored fur, a rare coat color that was first described in the 1880s. These chocolate-colored Siamese eventually disappeared in Britain, but they were still found around Thailand and Burma (now Myanmar).

Wong Mau was thought to be the result of a free-roaming Siamese mating with a stray Burmese. 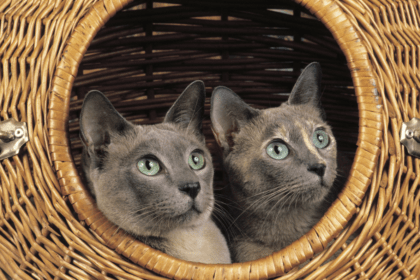 Inspired by Wong Mau’s unique look, Milan Greer decided to deliberately cross Siamese and Burmese cats in the 1950s. He called them “Golden Siamese” at the time. Other breeders were intrigued and continued to produce pointed dark-brown cats.

The breed was registered under the name “Tonkanese” in 1967 by the Canadian Cat Association. This was a name that referenced an island in the South Pacific that didn’t discriminate against “half-breeds.”

But in 1971, the spelling was changed to Tonkinese, after the Bay of Tonkin in Vietnam, a country the Tonkinese isn’t from. In 1984, the Tonkinese was recognized by the Cat Fanciers’ Association.

Most Tonkinese cats will demand your attention — although not as loudly as the Siamese. They want to be on your lap, shoulder, or in your arms all day long!

If they’re not getting cuddles and pets, the Tonkinese prefers to follow you around the house, watching you go about your routine.

This is a sociable cat that enjoys spending time with everyone in the family — and all guests — although they will usually bond closely with one human in particular.

This is an active breed that loves to play, especially when it’s with you. They love tag, hide and seek, fetch, and any activity that involves you dangling a ribbon, pointing a laser, or throwing a toy.

This clever cat can also be taught tricks and will sometimes enjoy being walked on a leash. 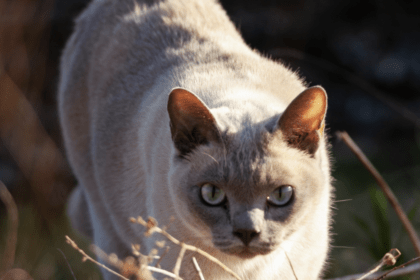 When the Tonkinese doesn’t get the attention they crave, this cat will start calculating other ways to get you to notice them. This includes breaking into cabinets and drawers and learning to unlock and open doors.

They can be a bit stubborn if they don’t get their way — or their cuddles. As a result, when you sit down, don’t be surprised if your Tonkinese leaps into your lap.

Once they’re satisfied that everyone is listening to their demands, the Tonkinese can sometimes be found on the highest perch in the house, watching the household go about their day from up above.

Muscular yet soft and silky, the Tonkinese is a strikingly beautiful blend of delicate and strong. This is an alert and active cat that looks like a Siamese with a more modern body and head shape.

Tonkinese cats are medium in size. The typical Tonkinese is about eight to 10 inches tall and 12 to 15 inches long. They weigh between six and 12 pounds.

They have a proportionate body that’s neither long and slender or cobby and compact. This includes their tail, which is described by the CFA as proportionate and tapering.

The Tonkinese has high but gentle cheekbones, giving their head a slightly rounded wedge shape. They have a long and wide muzzle, but the rest of their features have a lot of sloped lines that give them a very soft face.

Their head and face are a bit rounder than the Siamese, with alert ears and almond-shaped, slanted eyes. 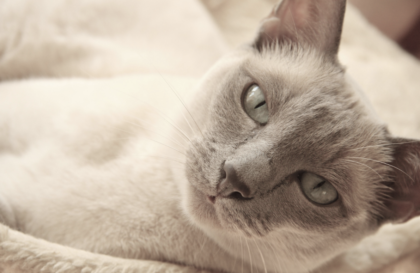 The Cat Fanciers’ Association states that the Tonkinese cat’s brilliantly colored eyes are best viewed in natural light. Their eye color should be aqua, an eye color described as a “definitive characteristic” of mink-colored cats.

The Tonkinese was actually the first pedigreed cat to have aqua-colored eyes!

Their proportionate legs are slim, with oval-shaped paws. The Tonkinese’s hind legs are slightly longer than the front, with four toes instead of five.

The Tonkinese has a silky, soft coat that lays flat to their body. It can sometimes appear a bit glossy. Younger Tonkinese will have a lighter coat and the development of full-body color can take up to 16 months.

They are a pointed cat, meaning their mask, ears, feet, and tail are darker than the rest of their coat. The Tonkinese comes in 12 mink variations, including natural, blue, champagne, and platinum.

The Tonkinese loves to climb and loves to get into things they’re not supposed to. For this reason, it’s important to cat-proof your home to prevent the Tonkinese from accessing items — or entire rooms — they shouldn’t.

Make sure you have cat-proof locks or devices on your doors, especially ones leading to outside. You should also consider baby locks for your cabinets and drawers, preventing even the most mischievous or bored Tonkinese from digging around inside them.

Make sure the surfaces in your home — including coffee tables, nightstands, and counters — don’t have valuable or breakable items. They might end up on the floor if the Tonkinese feels ignored for too long.

Tonkinese cats also shouldn’t be left alone for too long. They could become frustrated and sad if you leave them by themselves for hours at a time each day.

This is a cat that needs companionship and attention. This will not only keep them happy but they’ll avoid your collectibles and furniture from being destroyed out of frustration.

The Tonkinese has inherited a lot of genetic health problems from the Siamese. This includes:

Despite these possible conditions, the Tonkinese is usually a generally healthy cat. They can be prone to gingivitis, meaning you may want to brush their teeth regularly and get special dental treats.

Like any other cat, you should always take them to regularly scheduled vet visits to help prevent, identify, and manage diseases and illnesses.

Tonkinese cats can sometimes have digestion issues, meaning food for cats with allergies or sensitive stomachs could be very helpful. Always check the cat food’s label to ensure that there aren’t a lot of carbohydrate “fillers” within the ingredients, including corn and wheat. Carbs, which provide no nutritional value for cats, are usually the source of many cats’ food allergies.

To sum it up, you may also want to stick to natural, healthy cat treats. 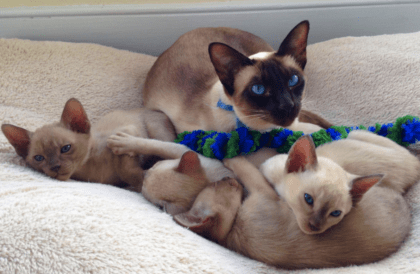 The Tonkinese gets along great with other pets and with children of all ages. They also get along with other cats, especially other Tonkinese.

It’s often recommended that you adopt two Tonkinese together so they have another companion to keep them company when you’re at work. Above all, this will keep them out of trouble — at least for a little bit.

Just make sure to introduce your Tonkinese to other pets and kids with proper supervision, allowing them to get used to each other. If not, the Tonkinese will always want to be the boss.

While the Tonkinese as we know it today is a relatively new breed, chocolate Siamese cats like Wong Mau were depicted in ancient text. After that in Thailand, a cat resembling a Tonkinese was mentioned in “The Cat Book Poems of Siam,” which was published in the Ayudha Period (1358 to 1767).

This possibly ancient cross between the Siamese and Burmese is becoming more and more popular in the United States due to its stunning appearance and infectious personality. Social, loyal, and affectionate, the feisty Tonkinese is perfect for a family with a lot of love and attention to give.

Whether it’s riding around on your shoulder or cruising through your neighborhood on a leash, the Tonkinese won’t want to leave your side.