If you can imagine a furry feline dressed to the nines with a fancy coat and a bowtie, you have a Tuxedo Cat (but not really). A Tuxedo Cat is a type of cat with a contrasting colored coat reminiscent of a tuxedo suit. More often than not, these cats have black and white coats with any pattern. However, the term can refer to cats with gray and white colored coats as well. Tuxedo Cats are not a cat breed but a way to describe a bi-color pattern among certain cats.

Let’s take a closer look at the Tuxedo Cat, its history, the different feline breeds that can be in this group, and much more!

What is a Tuxedo Cat?

Tuxedo Cats are cats with a distinct coloration pattern that represents a wide range of cat breeds. The coloration is similar to a male human’s formal attire, specifically black and white contrasting colors. There are about 40 breeds that fall under the Tuxedo variety, such as the Manx, Norwegian Forest Cat, Scottish Fold, Turkish Van, and many more.

The tuxedo coat pattern can vary with different spots and stripes around the body, as well as white fur on the feet, chest, and belly. There may also be variations of patterns around the face, like a mustache or other features.

Typically, these cats are friendly, playful, and extremely loyal. They are almost like dogs in the sense that they enjoy spending time with their owners and being a part of the family. A Tuxedo kitten can be especially outgoing (and adorable, of course).

And although this generalization is true for most Tuxies, it is important to note that this is not a specific breed of cats but a type of coloration of cats. So the temperament can vary from cat to cat, depending on their training, upbringing, and other factors.

Besides being incredibly charming and a treat to have around the home, Tuxedos have been spotted throughout pop culture. Such iconic feline figures as the Cat in the Hat and Sylvester the Cat are Tuxedo Cats with black and white coloration. The animated cat developed in 1919, Felix the Cat, also falls into this cat variety. 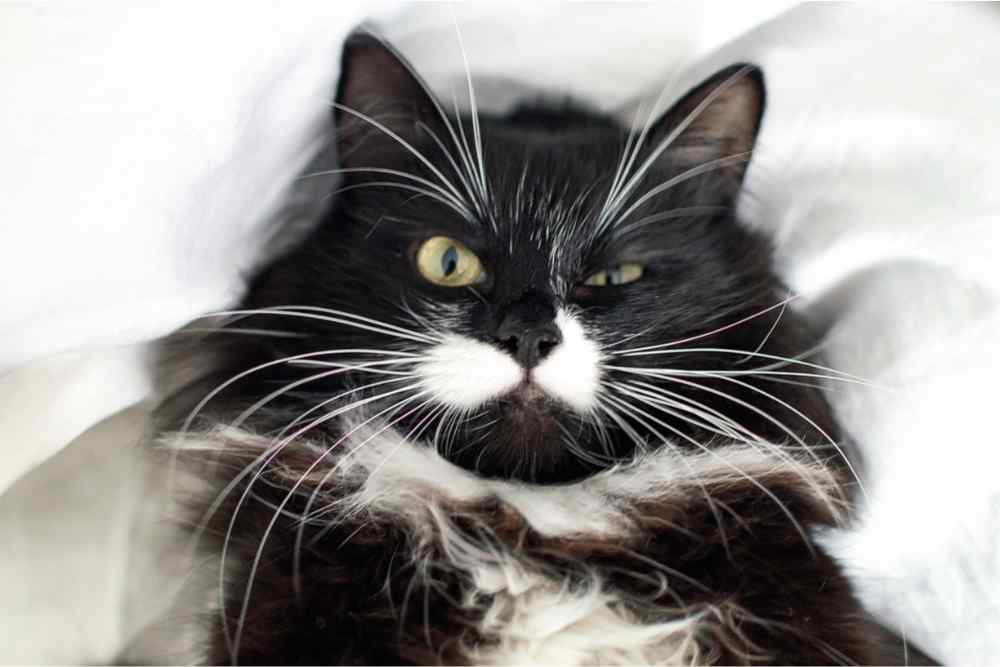 Are Tuxedo Cats Considered a Breed?

No, they are not considered a breed. The reason for this name of cats is because of their bi-coloration of contrasting black and white, resembling a tuxedo suit.

And since these cats can be various cat breeds like an American Shorthair, Maine Coon, and many more, the coats can range from short, long, shaggy, smooth, silky, and everything in between.

Are All Black and White Felines Called Tuxedo Cats?

No, not all black and white cats are known as Tuxedo Cats. It all boils down to the genetics of a cat. For example, a male cat has one gene for either orange or black colored coat. The black coat is required to be considered a Tuxedo. In some cases, the male cat can have two color genes, but it won’t result in the tuxedo coloring.

With female cats, they have two genes for orange or black fur. However, only the female cats with double genes for black fur are Tuxedo Cats. There can be a combination of colors such as orange and black fur resulting in a tortoise pattern, but these are considered calico cats.

With that being said, certain black and white cats are not Tuxedo Cats because of the different patterning on the cat. The typical Tuxedo markings have white paws, a white chest, and a white belly, with the exception of other variations. Tuxies can also have white markings on their face, which connect to the chest or other patches on the body.

Some Tuxedos can have a gray and white coloration with similar white markings. However, these cats are generally compared to the black and white Tuxedo Cats.

There has been research to determine the difference between the different colored cats such as calico, tortoiseshell, and tuxedo. And although each of these cats contains some genetic similarities, there is one difference that sets them apart. Most calico and tortoiseshell cats are female, while the population of Tuxedos is equal to male and female.

The Tuxedo bi-color pattern can be traced back to the days of the Egyptians. There have been instances when the cats’ coloration was identified on their tombs. Cats were praised and worshipped by the gods. They were so admired that Egyptian goddesses were often depicted as cats. With all of the evidence from royal tombs, goldsmithing, and hieroglyphics, we can see that the Egyptians were very fond of cat figures, especially the Tuxedo Cat.

Aside from being depicted in ancient Egypt, the Tuxedo Cat has popped up throughout pop culture. One of the first recognizable Tuxedo characters is with the 1920’s silent film animated character Felix the Cat. This cartoon cat is drawn as an all-black cat except for a white chin and large white eyes. You can easily spot Felix on tons of collectible items such as clocks, lunch boxes, t-shirts, toys, and much more.

In 1957, there was another well-known Tuxedo named “The Cat in the Hat.” From the collection of children’s books by Dr. Seuss, this story starred a rambunctious and thrill-seeking Tuxedo stirring up fun around the house. The book was adapted into a live-action film in 2003 starring Mike Myers as the famous Tuxedo Cat. 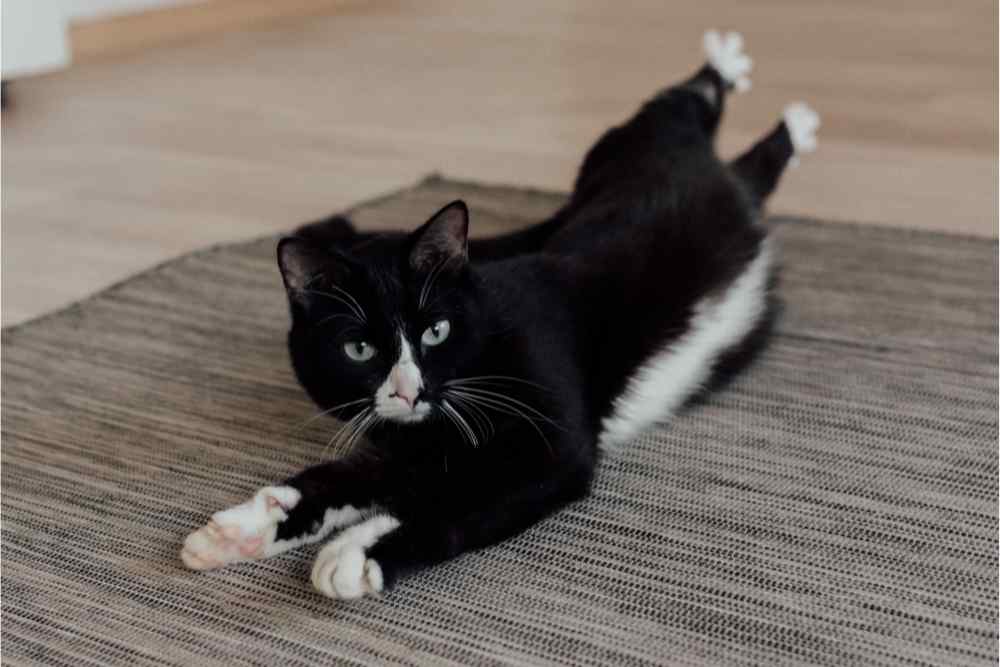 What Breeds of Feline Are Tuxedo Cats?

As mentioned, “Tuxedo Cat” is not a term for a certain breed of cats. It’s a name that refers to the bi-color pattern of certain cats. However, even though Tuxedos do not fall under a specific cat breed, there are a handful of cat breeds that follow the black and white color tuxedo pattern.

The British Shorthair is an affectionate and easygoing Tuxedo Cat. They have a short, thick coat, mostly with a gray and white pattern. Generally, these cats aren’t lap cats, but they will snuggle up to you on the couch when you’re watching TV.

This cat breed makes for excellent companions due to their gentle nature. The Maine Coon feline is tender yet playful, almost as youthful as a kitten. They are larger than Tuxedos, weighing about 12 to 15 pounds. This cat’s main colors tend to be a brown tabby color, but they can also demonstrate Tuxedo characteristics.

The Manx feline is a Tuxedo known for hunting bugs and other small rodents; however, they also have an affectionate side. The Manx breed is famous for being tailless or having a little nub where their tail should be. These cats come in a variety of colors and patterns, such as black and white or tabby.

The Scottish Fold is a medium-sized cat known for its incredible wit and intelligence. Scottish Fold cats enjoy solving puzzles and learning new skills. They are extremely friendly and loyal, almost like a dog. Their coat is plush and soft and comes in a range of colors, including the tuxedo pattern.

The Turkish Angora is an elegant cat breed native to the country of Turkey. Historians believe them to be the first longhair cat breed in Europe. These cats are very active and playful and move about with grace. They enjoy being the center of attention and putting on a show for their owners. Their coat comes in a few different colors, including black, gray, cream, and white, with various patterns.

Turkish Van’s are a rare cat breed developed in central and Southeast Asia. They are a beautiful breed with a semi-long, cashmere-like coat. The Turkish Van has powerful hind legs that can help them jump up on almost anything. Personality-wise, the Turkish Van cat breed is sweet and loves cuddling up with its owners. The coat color and patterning can range from tuxedo-colored to tortoiseshell, tabby, and patchy.

Tuxedo Cats are not particularly rare because they can be found in a wide range of cat breeds. Because Tuxies are not defined as one particular cat breed, but are seen as a type of cat coloration, there are many instances of coming across a Tuxie.

Whether they are going out for a night on the town or just having a nice dinner at home, the Tuxedo is an elegant, formal cat ready for any occasion. With its black and white patterned coat, the Tuxedo can be easily spotted and appreciated for its beauty and poise. Tuxedo kittens are some of the cutest kits out there, often featured on magazine covers and cat calendars.

This cat has a long line of history from ancient Egypt through contemporary pop culture, so there is no denying the Tuxedo Cat’s impact on the world!

Greg Poblete is a fresh writer who has experience creating content revolving around pop culture, music, television, comedy, and as of late, CBD. Aside from writing, Greg has become increasingly interested in sleight-of-hand magic, stand-up comedy, and long distance running.