Cats do a lot of weird things — like, a lot. Whether it’s storming down the hallway at top speed in the middle of the night or hissing at the neighborhood birds out the window, your cat’s behavior is entertaining at the very least. Amongst the weird things cats do is taste us with their sandpaper tongue! Which may make you wonder, “Why does my cat lick me?”

Cats are a mystery. Their behavior is not as well studied and as understood as a dog’s. But one thing is for certain: A cat that licks you loves you! And there are many reasons that a cat will tongue a person they love, ranging from comforting to cleaning you. Let’s go over why your cat is being affectionate in this way with you, why it may hurt, and how you can politely tell your cat to stop (if that’s not your thing)!

Is It Normal for My Cat to Lick?

Yes! It’s very normal for cats to lick themselves, other cats, and even you!

For many cats, tasting is a natural instinct. Their mothers licked them when they were kittens, so it’s always been a part of their life. There are many reasons cats lick themselves, all leading back to this natural instinct and upbringing. Many of these reasons carry over to why they may lick you!

As you can see, there are many reasons cats enjoy doing this. They will also lick humans for many of the same reasons, including bonding, grooming, and comforting. We’ll go over these reasons in a bit more detail below.

What is Normal vs. Excessive Licking?

Licking is considered “excessive” if it becomes a compulsive behavior. If you notice your cat obsessively licking themselves or you, there might be a more serious issue.

Should I Go To The Vet For a Cat That Licks Too Much?

If your cat is grooming each day, that is perfectly normal and healthy. It’s more concerning if your cat doesn’t properly groom themselves. But if you feel your cat is obsessive in the way they clean — focusing on a specific spot or licking constantly — it’s probably safe to assume that they are experiencing discomfort, stress, or a health complication.

A veterinarian will be able to evaluate their behavior and health with a variety of tests, helping you find the source of the problem and a possible solution or treatment plan. 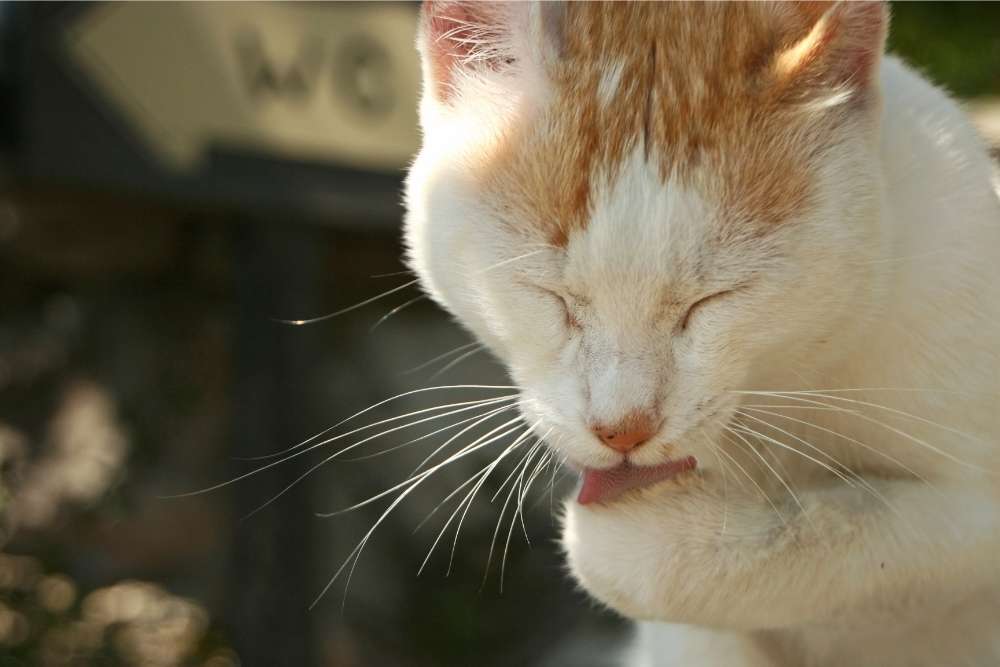 Why Do Cats Lick?

Dog behavior is understood more than cats. Since dogs lick people to show love, that’s probably why cats do it, too, right?

Well, it’s not too far off. But the reasons for cats licking their owners are a bit more varied and complex. It’s often a blend of instinctual behavior and concern for you and your incompetence. Read on to see what we mean.

Cats show love in various unique ways, including rubbing against you, showing you their stomach (and sometimes their butt), and licking. For many cats, licking is a way to show you they are being friendly and looking for some affection in return.

Kittens are especially likely to lick their owners when looking for cuddles and attention once they are considered part of their family. Kittens recall their mother cleaning them as a kitten and now understand it to show affection to other family members.

Cats will often view their owners as part of their family, maybe even as a fellow cat. But they can tell something is off. You clearly can’t hunt on your own. And you can’t even lick yourself. For many cats, licking you is a nurturing behavior.

The Sense That You are Anxious

Cats lick themselves and lick other cats to help them stay calm. Your cat might lick you if they sense you are feeling anxious or worried. Cats are very attentive to your feelings — more than you might realize.

A recent study showed strong evidence proving that cats are sensitive to human emotional gestures, including facial expressions. A study with twelve cats and their owners at Oakland University in Michigan. The study found cats could easily identify the difference between a smile and a frown.

When a cat saw their owner smile, the feline would start purring and rubbing on their owner. Some would even plop down in their lap. It was clear that the cats wanted to spend time with their owner while smiling and appeared in a good mood.

When an owner was frowning, cats were more reluctant to be nearby. They seemed to be wary of an owner who appeared angry. But some cats take the opposite approach and feel the need to comfort owners that look upset. Cats are known to have a “sixth sense,” which is detecting death. Many hospices have adopted cats to comfort patients that are passing away. The cat will know which room to go to instinctually, jump on the bed, and purr next to the patient. Purring is a cat’s way to comfort themselves when they are dying or in pain themselves. So don’t be surprised when a cat comes over to lick you when you’re feeling down!

They Are Marking Territory

Cats use pheromones to mark their territory. Some cats do this by peeing on things or scratching surfaces. But cats will also mark their property by rubbing on things and licking things. When your cat licks you, they are most likely saying that you are important to them, and they want other cats to know it — and stay away!

You Just Got Out of the Shower

Cats are often horrified at the thought of their owner going into the shower to purposefully get wet. Cats often dislike water because it’s cold and uncomfortable. So why are you purposely subjecting yourself to such a horrific experience!

When you come out of the shower, cats will often start licking your hair if it’s still wet. They know how it feels to get their fur wet. Well, your hair is often your only fur, and your cat is terrified that you would let it get so uncomfortably wet.

Why Does it Hurt When My Cat Licks Me?

Even though licking is often done to comfort you, help you, or bond with you, licking is surprisingly not a pleasant experience. It can hurt! Cats have a unique tongue full of backward-facing hooks called “papillae.” These hooks help cats pull and clean their fur, similar to a comb. The hooks are made of keratin, which is the same material as a human fingernail. It’s safe to say that cats don’t have smooth, soft tongues!

For some people, a cat’s rough licking can feel good. For others, it tickles, and for some, it’s downright unpleasant. Just remember that cats aren’t doing this on purpose. They have no idea that this process is hurting you and most likely think you enjoy it. 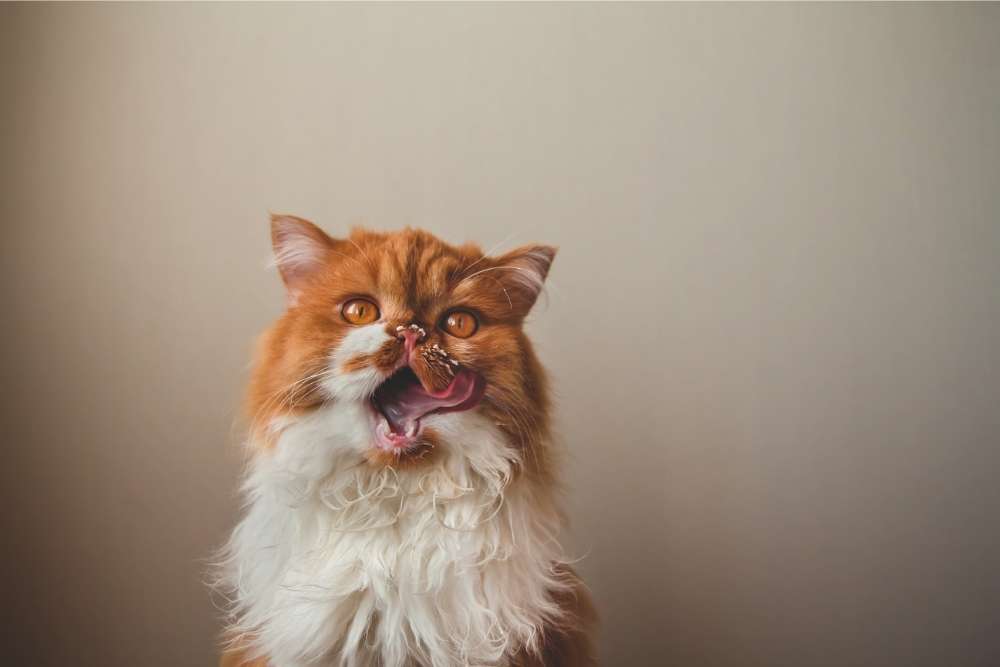 How Do I Stop My Cat From Licking Me?

For many cats, licking is an instinctual behavior that they aren’t thinking about. It can be tough at first to train a cat to stop licking when it’s such a natural response for them. If you don’t like your cat being affectionate with you, there’s luckily a few things you can do to lessen this behavior without insulting them.

Give Them an Alternative

Whenever your cat goes to lick you, offer them a toy or material to lick instead. Cats won’t understand that licking is wrong until you show them. If you provide them with an alternative every time, like catnip spray, your cats will soon learn to avoid licking you altogether.

Give Them a Distraction

When your cat goes to lick you, immediately bring out a toy. Start shaking it excitedly in front of them or moving a ribbon enticingly. Your cat will most likely be distracted from their plans to lick you when they see the toy. That’s hard to resist!

Cats will obsessively lick themselves, and you, when they are feeling anxious or stressed. To soothe them and cut back on obsessive behavior, give your cat CBD treats or drop CBD oil on their cat food.

CBD is a non-psychoactive compound found in hemp that supports the reactors in your cat’s endocannabinoid system (ECS), helping balance their mood and overall well-being. CBD will get them feeling comforted and relaxed. And if your cat feels calmer, they won’t be as likely to perform repetitive, compulsive behaviors!

Final Thoughts: Why Does My Cat Lick Me?

Cats are strange. But that’s why we love them! We love that cats play with scrunched-up paper balls instead of expensive cat toys. And we love that they like to race around under the covers at night. It’s those quirky antics that make cats a constant source of entertainment and affection.

Sometimes cats show that affection by licking us. For some of us, that can hurt! So why the heck are they doing it? Some cats will start licking themselves (or you) out of stress or in an attempt to soothe a painful area of their body. If you suspect that your cat is licking way too much or you see missing fur, it’s time to immediately call in a vet and the proper care they need. But most Cats are most often tasting you out of love. They are cleaning you (or teaching you how to clean), comforting you, or just showing you affection. If you don’t find it too painful, join in on the fun and let them do their thing.