The Mastiff – they’re large, lovable, loyal, and just all-around impressive dogs. They’re typically seen as intimidating guard dogs (which they certainly can be), but they are so much more! Many mastiff dog breeds can be affectionate, friendly, and great with people.

What is a Mastiff Dog Breed?

Mastiffs are one of the oldest dog breed families and have been partnering with humans for thousands of years. In fact, there are records in Europe and Asia from over 3000 years ago that show dogs similar to mastiffs!

Legend has it that mastiffs are descendants of the ancient Molossus dog, a now extinct dog from the Roman Empire and Ancient Greece. These dogs were renowned for their large size and ferocious nature, making them perfect for hunting and guarding livestock.

The mastiff dog breed family is composed of many breeds, each with their own personality and temperament, but all mastiffs have one thing in common – they’re all large, powerful dogs that were bred to work with humans. Throughout history, they were primarily bred to be guard dogs, hunting dogs, war dogs, and fighting dogs. 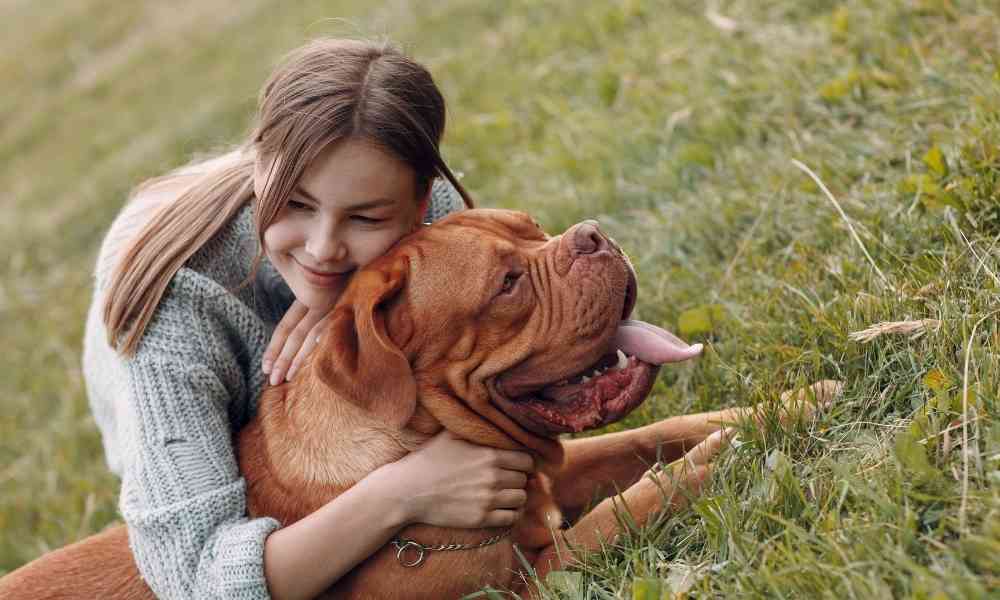 How Many Mastiff Dog Breeds Are There?

Currently, there are 19 different mastiff dog breeds! These dog breeds originate from all around the world (from American to Brazil, and even Japan!), and each has their own unique twist on the Mastiff. The different breeds have different temperaments, personalities, and purposes, but in general, they are all big, loyal companions.

Yes, many mastiff dog breeds can make good family dogs. Not all breeds are ideal family dogs because some are more suited to be guard dogs or working dogs.

A good family dog should be gentle, loyal, and just a bit protective of you and your family. Several mastiff breeds, like the English Mastiff or Bullmastiff, fit into this category and often make wonderful family dogs.

Mastiff breeds come from everywhere! These big dogs come in all different shapes and with varying personalities, so it’s important to find the right one that fits you.

Here’s a full list of the Mastiff dog breeds:

What Are the Most Common Mastiff Dog Breeds?

Though this list may seem long, there are just a few Mastiff’s commonly recognized today. Here they are!

The powerful Bullmastiff is one of the most common mastiff dog breeds today. They are a mix between a Mastiff and the popular Bulldog, so if you like the size of a Mastiff and the adorable smushed face of a Bulldog, this might be the dog for you.

Bullmastiffs were originally used as guard dogs for estates in the 1800s and were great at keeping people away. They bring that protective nature to homes today, making them a popular choice with families. This breed does very well raised in a family and is typically good with kids.

Although powerfully built, they are actually quiet and gentle dogs. They are typically easy-going, laid-back, and don’t get angry very easily. But if your family is threatened, their guard dog instincts will kick in, and they can be very protective.

You should be aware that Bullmastiffs can be very stubborn and possibly aggressive with other dogs. However, with proper training and socialization, they can learn to control their impulses. Also, these dogs are quite hefty and can weigh up to 130 pounds, and grow almost 27 inches tall.

The German Mastiff, or commonly known as the Great Dane, is one of the largest dog breeds out there. The exact genetics of Great Danes aren’t known, but they are made up of part English Mastiff and part Irish Wolfhound. They are a very popular breed with big dog lovers because they’re known to be gentle giants.

German Mastiffs were originally kept by German royalty in the 1800s as guard dogs for estates and properties. Not only that, they were used as agile and large hunting dogs that could pin down large game, like a boar or bear!

Nowadays, Great Danes are loyal, playful dogs that get along well with families and kids. They are generally friendly and affectionate but can be protective given a threatening situation. If they are socialized and given plenty of exercise and play, they are wonderful house pets.

Take note that these dogs can be big droolers, so they might require a bit more clean-up than other dogs. Also, they are often unaware of their big size, so they can unintentionally knock over things around the house. But you can’t blame them — they’re huge! They can weigh up to a staggering 175 pounds and grow 32 inches tall.

These massive, fluffy dogs were originally the guard dogs of the Himalayan villages in the Tibetan Plateau. They’re a popular Mastiff breed because of their voluminous, warm coat, which is ideal for the cold temperatures of Tibet. Tibetan Mastiffs were tasked with protecting the village at night from predators like wolves and tigers and often safeguarded flocks and livestock.

With an adorable face and iconic fluffy hair, there’s no wonder why Tibetan Mastiffs are so popular today. They’re an independent and stubborn breed that tends to be protective, so they need proper training and socialization in order to get along with strangers and kids. They also need loads of exercise to be happy, so a yard and frequent trips to the dog park are ideal.

Because of their guard dog nature, this breed isn’t for new dog owners. But if properly cared for, Tibetan Mastiffs can be a loyal and patient family dog. And like all mastiffs, they can get big — up to 160 pounds and almost 30 inches tall!

What is the Friendliest Mastiff Dog Breed?

The English Mastiff, or sometimes just Mastiff, is the most gentle of all the mastiff breeds. They also might be the closest to the original mastiff dog that accompanied ancient Romans and Greeks. Mastiffs were primarily used as war dogs, fighting dogs, and hunting dogs, where their large size and loyalty to humans set them apart.

However, the English Mastiff of today is one of the most friendly dogs you will ever meet. They’re loyal, gentle, and love spending time with people. They are also relatively low energy — their ideal afternoon is probably spent curled up on the sofa napping.

You should know, though, that these dogs are big. Some would say massive (wink wink). Mastiffs are one of the largest and heaviest breeds out there as they weigh in at almost 230 pounds and can grow up to an astounding 36 inches tall. They’re great family dogs and good for first-time dog owners, but if you’re considering one, make sure you have lots of space and extra towels to wipe off the drool.

What is the Rarest Mastiff Dog Breed?

One of the rarest mastiffs is the Japanese Mastiff, also known as Tosa Inu or the Japanese Fighting Dog. These large, regal dogs were originally used in dog fights in Japan. However, because of the strict laws in Japan, they were taught to be quiet while fighting and attentive to the commands of their owners.

As a result, Japanese Mastiffs are loyal and obedient dogs that will heed the call of their owner (or pack leader). Although naturally protective and wary of strangers, with the right training, they can be gentle, loving, and a good family dog. Additionally, because of their keen senses and attentive nature, they make very effective watchdogs.

Japanese Mastiffs have only recently been introduced to the United States, making them a difficult breed to find. So, if you happen to come across one, you know you’ve found a one-of-a-kind mastiff. 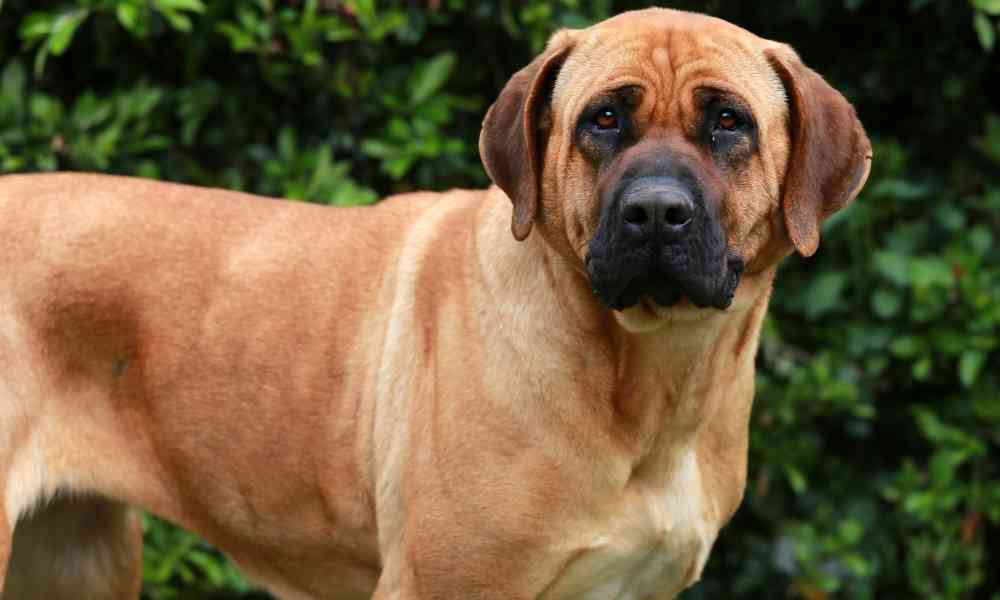 Mastiffs are a popular dog breed throughout history and in the media. Here are some of their most notable appearances:

Yes, Mastiffs are big; that’s what they’re known for! But little did you know, there are many breeds in the mastiff family. They vary in personality, temperament, and slightly in size (wink wink), but they all have the potential to be loyal and loving dogs.

If you choose to own a mastiff, you won’t regret it. Large dog breeds like these give a lot of love…and slobber too!