The fear of sudden loud noises is an important trait developed from evolution that has allowed continued survival for dogs, humans, and other animals alike. By allowing our instincts to kick in, reacting to undesirable noises helps trigger the fight-or-flight response. Despite this, there are a handful of sounds dogs hate, which can develop into serious phobias later on in their lives.

Continue reading to discover why the fear of loud noises is so common in dogs. Find out the sounds that scare dogs most often, how to recognize noise phobias in your pup, and what you can do to help your frightened four-legged friend!

Why Do Certain Sounds Scare Dogs?

Does your dog start shaking every time you turn on the vacuum? Do they jump at the sound of thunder? Or perhaps they hide when fireworks are going off? If any of these are true for you and your pup, they might be suffering from noise phobia.

Think about it, why do certain sounds scare you? Just like us, a sudden and loud noise that seems to come from nowhere can be frightening or jarring at the very least. It sure doesn’t help that our canine companions have developed much more sensitive ears through evolution than we have (more on that below).

Are a Dog’s Ears More Sensitive Than Human Ears?

Dogs have much more sensitive hearing than humans do, which may be partially to blame for the common fear of loud noises. Sounds that are loud to us are generally experienced at a much higher volume by our canine companions. Dogs are also capable of hearing sounds at much pitches and higher frequencies than humans.

When it comes to noise phobias, certain breeds of dogs are significantly overrepresented, strongly implying an inherited factor to this condition. Many experts believe that Border Collies, German Shepherds, and Australian Shepherds are more genetically prone to inheriting noise phobias than other dog breeds. 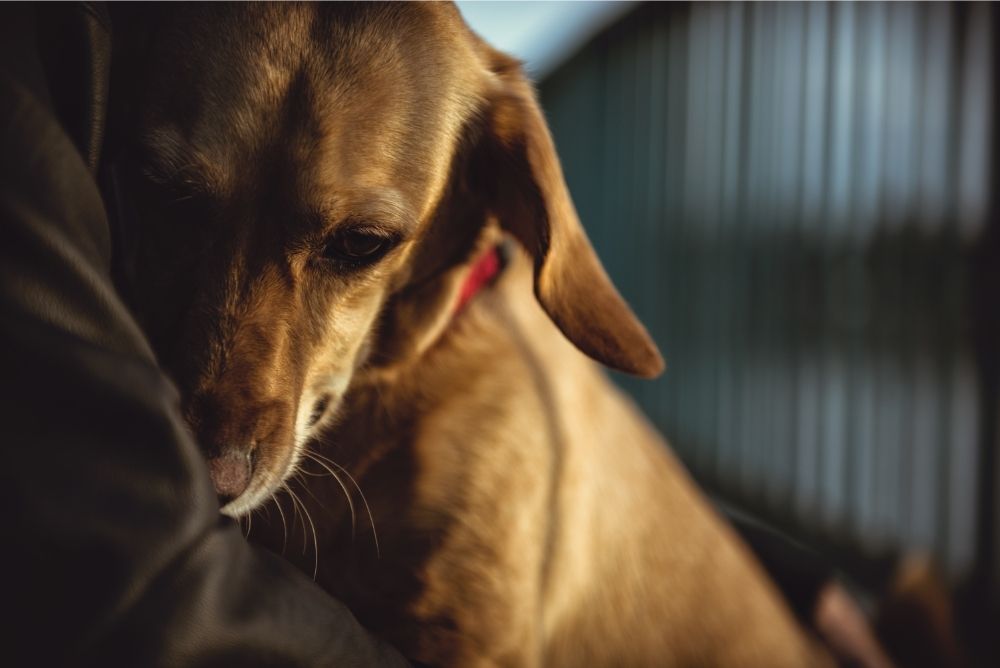 What Causes Noise Phobias in Dogs?

Noise phobias in dogs are generally pretty common. One recent study showed that an estimated 39% of dogs show symptoms of noise phobia. This fear of noises is also commonly seen paired with other behavioral disorders such as stress or separation anxiety disorder.

The list of things that can potentially cause a noise phobia in your sweet pup is virtually endless. Because of their amazing sense of hearing, dogs can generally develop a fear of any sound, no matter how insignificant. Even small, odd noises like a squeaky door being opened or a fan being turned on can freak your dog out.

However, most dog owners can attest to a few noises in particular that are notorious for causing fear in our canine companions. In fact, you’re probably thinking of them right now, but we’ll list a few just for good measure: fireworks, thunderstorms, car alarms, etc. Trust us, we know the pain all you puppy parents feel when the fourth of July rolls around.

Even though thunderstorms are also a common cause of canine noise phobia, dog parents should take care to understand the difference between noise and thunderstorm phobia.

Noise phobia typically only refers to the fear of loud noises. The phobia of storms, however, is a multisensory experience for dogs. While the loud noises produced by thunder are part of the phobia, the other aspects of a storm (i.e., rain battering the roof, flashes of lightning, changes in air pressure, heavy wind, etc.) may all independently trigger fear.

There is also a possibility that these other storm aspects will become stress-inducing predictors of an incoming thunderstorm. While thunderstorm phobia and other noise phobias may often occur, they also often occur separately.

Here are some of the most common sounds dogs hate. If any of these noises or sounds are present, pay extra attention to your dog to see if they react negatively.

The sound of thunder is one of the most common fear-inducing sounds for dogs. Besides the loud booms caused by thunderstorms, many factors may be involved in causing the fear induced by storms, including:

The explosion of fireworks is another very common sound dogs hate. Fireworks are significantly louder than your everyday noises. Their sounds are random and often last throughout the night.

Thankfully, fireworks are only set off a couple of times a year. Watch your dog carefully during fireworks around Independence Day and New Year’s so that you can calm them down.

Your dog doesn’t know that carpets need to be vacuumed and most likely assumes it to be a noisy, evil robot of some sort encroaching on their territory. Certain dogs don’t even put up a fight for their homes, instead preferring to cower under the couch when their pet parents go to clean the carpets.

Tractors beeping as they move in reverse, jackhammers breaking up concrete, and hammers banging away can often make construction zones especially stress-inducing and frightening for dogs with noise phobias.

The sound of a furnace or air conditioner turning on can send certain dogs running. The sudden nature of this sound can often cause quite a startle in your pup.

Car alarms are typically so loud that they can not only cause door frames and windows to rattle but may rattle your pup into a fear-induced frenzy as well. But who can blame them? A rogue car alarm in the middle of the night is more than enough to rattle most people!

If you live near an airport, you have likely noticed that your sweet pup behaves fearfully whenever a plane passes overhead. This fear might be especially true if they were raised or trained in a rural area and never conditioned to hearing this loud and scary noise.

Skateboards often frighten dogs because of the unpredictable noises as they pass over bumps and cracks in the road or sidewalk. A skateboard zooming past a dog may also skip right over the dog’s instinctual phobia of loud noises, immediately initiating your pup’s chase instinct instead, which may potentially cause the dog to run after the skateboarder for a good chase.

How to Calm a Dog with Noise Phobias

The most important thing for dog parents is recognizing your pup’s aversions to loud noises early on and addressing them promptly. The fear will only intensify whenever a dog hears the scary noise. Eventually, the fear is sure to turn into a true phobia if left unaddressed. Here are some great ways to calm your dog when they are scared!

Creating a Sense of Safety

You can teach dogs to recognize a specific place in the home as a “safe space” to retreat when they are scared. Pet parents might also consider using sights and sounds—such as white noise, relaxing music, light-blocking shades—to block out as much sensory input from loud noises as possible.

Certain noises have a calming effect on dogs and may help soothe or calm them when the noises around them are too loud or frightening. 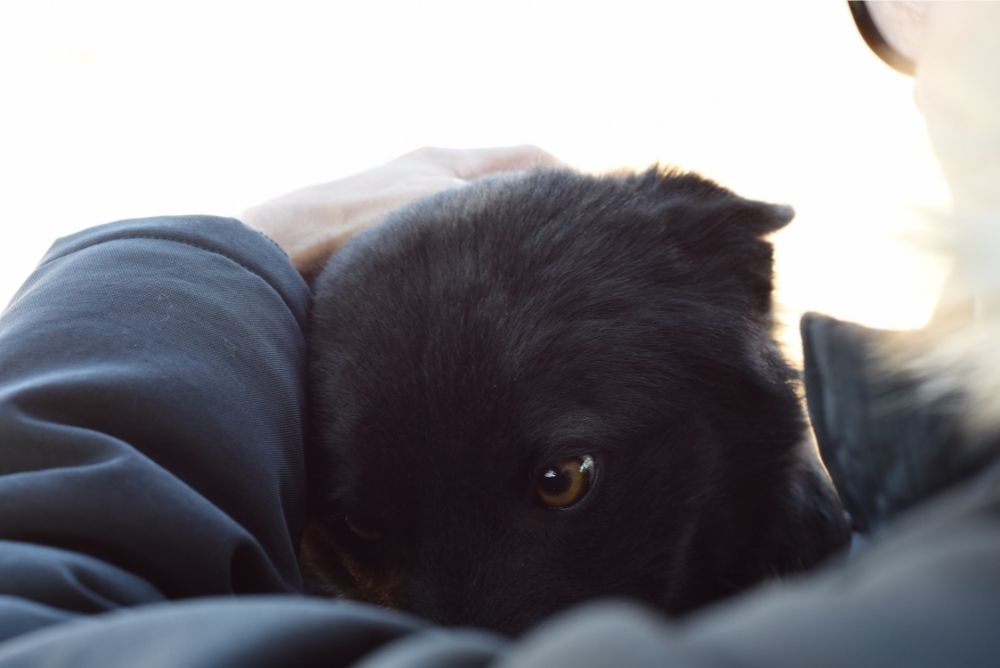 Can I Give My Dog CBD?

Yes! Cannabidiol (CBD) interacts with your dog’s endocannabinoid system (ECS) in the body that all mammals have. CBD supports the ECS, which helps regulate functions like:

Here at Holistapet, we carry delicious Calming Soft Chew treats for your dog to help them relax a little bit more. All of our products are 100% vegan, organic, and non-GMO, which can work wonders for your fearful pup. Try CBD to keep both you and your sweet pup healthy and internally balanced!

When it comes to canine noise phobias, we understand that things can get stressful. We all want our precious pups to be as happy as possible and hate seeing our little pals run around in fear trying to escape from a noise that we know isn’t coming to get them.

Thankfully, not all is lost. With calming playlists, the right training, and perhaps a CBD treat or two, you’ll be able to protect your four-legged friend from their fear of loud noises. And who knows, your pup might even realize that they’re actually very into Mozart during the next thunderstorm!