To own an Andalusian Horse is to own a piece of history. With origins dating back to the Iberian Peninsula circa 30,000 BCE, it’s an understatement to say these astounding horses come from old times. This ancient breed has been refined for millennia, and the heritage shows.

Andalusia Horses are one of the most fearless mounts ridden to this day. Their superior athleticism makes them the best dressage horse the equestrian world has ever known. Above all, the quality that people cherish most in their Andalusians is their tranquil and intelligent nature. The docile Andalusian makes a loving companion for any person, no matter their age or experience.

The Andalusian Horse has a wonderfully graceful appearance. A long, broad neck leads down to a well-muscled body. The chest is more expansive than other horse breeds but still proportionate to the rest of the horse’s frame. Their backs are short and level. Overall, the Andalusian has a balanced, handsome figure.

The head is medium-length with a straight or slightly convex profile. Their lean, angular jaw and flat nose make its face appear narrow. There is a gentle arch between the jawline and the muzzle, though this trait is more pronounced in some horses than others. The ears are small and flexible. Andalusian Horses have incredibly thick manes and tails.

The Andalusian Horse has a remarkable gait! Their leg movements are slightly more elevated than other horses, with a considerable extension from the knee. Andalusian Horses are famous for learning sophisticated steps, and their elegant trot makes them a popular choice for dressage competitions. 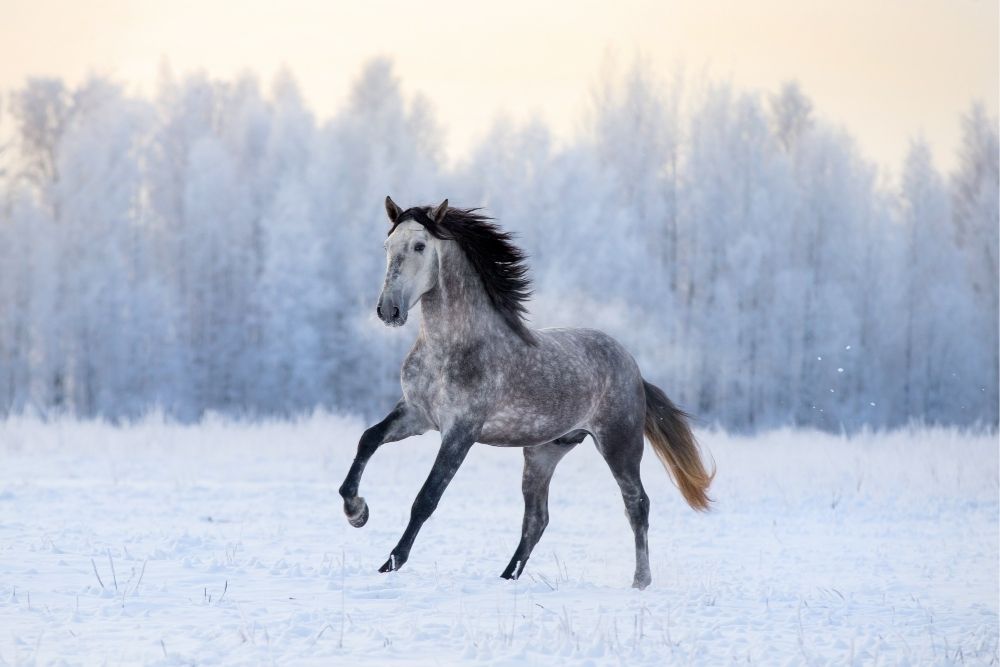 Andalusian Horses are famous for their calm, intelligent manner. They are eager to learn and able to master almost any technique as long as you treat them with respect. Andalusians are sensitive, so they do best with riders that treat them kindly at all times.

Though they are delicate at times, an Andalusian Horse is fearless in the face of pressure. The line is renowned for its bravery and ability to adapt to new settings. You won’t see an Andalusian backing away from unfamiliar sights or territories. Their confidence always shines through and adds to their dignified air.

The Andalusian Horse, also called the Pure Spanish Horse, descended from the ancient Iberian Horse that roamed the mountains of Spain and Portugal. The Iberian Horse may be one of the oldest breeds in equine history. Cave paintings on the Iberian Peninsula dating back to 30,000 BCE depict grand horses, likely of the same line. Iberian Horses may have been ridden into battle as early as 3,000 BCE, according to Homer’s recording in the Iliad.

The Iberian Horse influenced several breeds throughout history. Every civilization that occupied Spain — the Celts, Romans, Carthaginians, and various Germanic tribes — all got a taste of the Iberian Horse. Each of these societies played a role in shaping the modern Andalusian Horse. According to DNA studies, the Barb Horse of North Africa had the most significant influence on the Andalusian breed. The Barb Horses were likely brought to Spain in 711 AD by Carthusian Monks during the Moorish invasion.

The Carthusian monks were responsible for developing the Andalusian line. Since the monks could read and write, the Spanish nobility left them in charge of the studbook and pedigrees. By the 15th century, the Andalusian Horse became its own breed and shaped the development of other European horses. The Andalusian’s grace earned it the title of the “royal horse of Europe.” The magnificent mounts attended every royal court and event across the continent.

How to Care for an Andalusian

Although horses require plenty of attention, caring for your horse Andalusian should not be difficult. It’s vital to bring your horse to the vet for regular vaccinations, checkups, and routine care. Maintaining a balanced diet and adequate hygiene is also essential to your horse’s well-being. Trust me; once you fall in love with your Andalusian Horse, you’ll be inspired to provide them with the best care possible!

Andalusian Horses are very trainable. The breed is renowned for its superior intelligence and willingness to learn. However, keep in mind that this breed is sensitive to harsh treatment. Use positive reinforcement as often as possible. Gentle manners produce the best responses from Andalusian Horses.

The Andalusian Horse was practically built for dressage with its active gait and vast strength. Dressage is a skilled form of horse riding that prizes the horse’s flexibility, balance, and obedience. Your Andalusian will probably take to the sport like a duck to water!

When you first start training your Andalusian Horse in dressage, use the lightest possible touch on the reins to guide them. Ride them in short 10 or 20-minute sessions on a lunge line, asking them to walk, trot, and canter. The short sessions will build your horse’s muscles. You can observe what areas they may need to improve on and focus on those in later sessions.

Nutrition and Feeding for Andalusian Horse

A diet high in fiber and protein, but low in starch, is best for Andalusian Horses. The breed is prone to weight gain, so you must moderate their forage and horse pellet time, especially as they get older.

A mix of oats, bran, hay, and alfalfa are all safe to add to your Andalusian’s diet. Grass and lush vegetation can lead to digestive and metabolic issues, so introduce these to your horse slowly and observe their effects. Always measure food by weight, not volume. Be sure to balance your horse’s food and activity level — an active horse requires more calories than a sedentary horse.

You can feed your Andalusian the standard amount of food for a 1,000-pound horse, which is 15-20 pounds a day, depending on its activity.

The majority of Andalusian Horses in the United States are gray or bay. Black, dun, palomino, and chestnut are all acceptable colors, though they are rare.

Standard grooming requirements apply to the Andalusian horse, though the mane and tail require some extra care. Frequent detangling, conditioning, and even braiding are necessary to keep your Andalusian’s long hair gleaming and knot-free. Some owners tie or braid the tails so that they stay off the ground.

An Andalusian horse benefits from additional currying (a fancy term for “rubbing,” using a special brush) because it stimulates the horse’s natural oil production. These oils keep the coat shiny and soft. Since most Andalusian Horses have light-colored coats, you may need to bathe or spot-treat them often.

The Andalusian Horse is hardy — they don’t suffer from many health conditions. However, owners should be on the lookout for a couple of concerns. Taking your horse to the vet ensures the opportunity for early diagnosis.

The Andalusian is more prone to laminitis than other horse breeds. Laminitis occurs when the laminae (the soft tissue that attaches the coffin bone to the hoof wall) becomes inflamed. This condition causes the horse substantial pain and leads to an unstable coffin bone. Owners manage laminitis with anti-inflammatory medication, diet, special shoes, and extra hoof care.

Andalusian Horses experience higher rates of intestinal disturbance. A common issue in the line is reduced blood flow to the small intestines. Stallions are also prone to inguinal hernias at a rate 30 times higher than other horse breeds, according to a 2008 study.

Melanoma is a nodular skin condition that frequently occurs in grey-colored horses. The condition presents as black lumps near bald areas like the tail, anus, penile sheath, muzzle, or eye. Though some of these nodules are benign, it’s possible for them to grow into malignant tumors during a horse’s lifetime. Surgical or laser removal, cryotherapy, and chemotherapy are all options for treating any tumors that turn nasty. 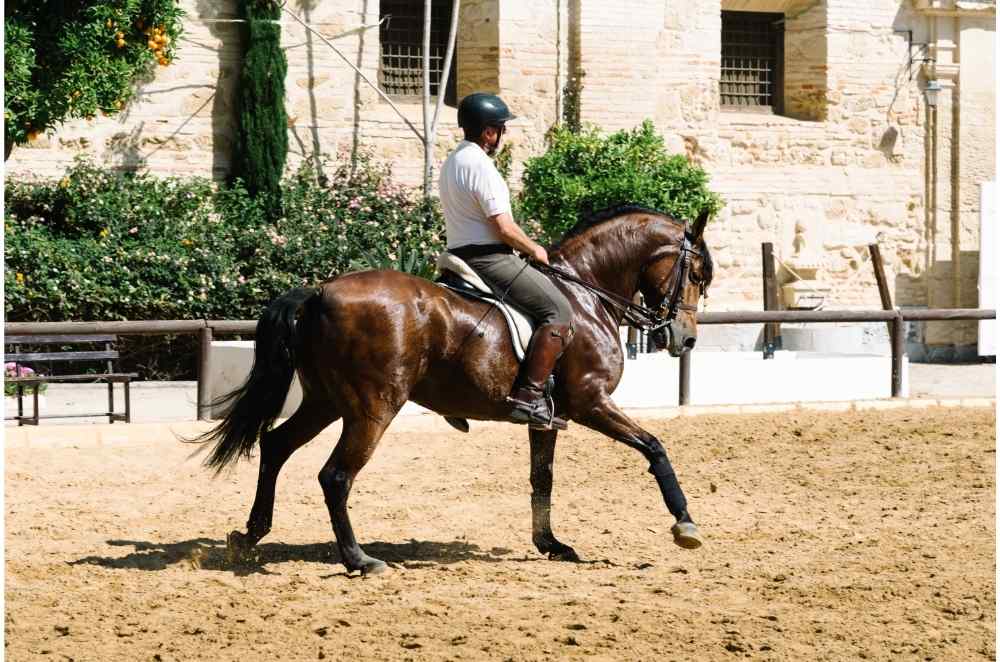 How to get an Andalusian Horse

These beautiful horses aren’t cheap! The average price ranges from $12,000 – $20,000, depending on age, training, gender, health, and pedigree. Before purchasing a horse, spend time with the animal to get a sense of its temperament. It’s also a good idea to inquire about health issues that may run in the direct family line.

The International Andalusian & Lusitano Horse Association maintains the oldest Andalusian breed registry and studbook. The organization consists of breeders and owners that work hard to preserve the line and spread education about the breed. The IALHA publishes magazines and holds events nationwide for purebred and half-bred Andalusian horses.

The breed got its name from the Andalusia province, located in the southern region of Spain. The Andalusian horse lives about 25 years if well-cared for. These gentle beasts were considered the finest horses in the world in the 16th century, and they don’t fall short of that reputation even today. The Andalusian is one of the most beautiful and devoted horse breeds a rider will know!

Jay Safakish is a professional writer and space cadet that enjoys educating others on holistic health. She earned her BA in Psychology from UC Santa Cruz and has worked in classrooms, jails, and mental health treatment centers. You can catch her taking pictures, riding her longboard, or exploring the city in her free time.