It’s no doubt horses are thrilling animals to be around, and Appaloosas are no different. The alluring, spotted horse draws eyes no matter where they are. Whether you’re riding or grooming them, you’ll feel an aura of intelligence and character radiating from each one. Owning an Appaloosa is one of the most rewarding experiences a horse lover will ever know!

Originating from an ancient breed thousands of years ago, the Appaloosa has developed into one of the most recognizable and coveted horse breeds in the world. The Appaloosa breed traveled the globe and was transported to North America, where the Nez Perce Native American tribe cultivated them in the 1800s. Today, Appaloosas make cherished family pets and prized competitors in many disciplines.

There are many features that make the Appaloosa horse distinct from other breeds, but their most striking feature is their spotted coat. You’ll find a vast array of coat colors on this breed, but spots, speckles, and splashes define them. These markings can vary in size and location, and no two Appaloosas have the exact same markings. The pattern of the coat can change as the horse matures from a foal to an adult.

Appaloosa horses also have striped hooves. The stripes display vertically on the hooves and alternate between lighter and darker shades of color. Contrary to popular belief, this trait isn’t common to this horse alone. Other horse breeds like thoroughbreds and paint horses can have striped hooves as well.

Another distinctive feature of this breed is its visible sclera. The sclera is the part of the eye that surrounds the iris. Other horses have scleras too, but their scleras are often dark and indistinguishable from the iris. The Appaloosa’s white sclera makes their eyes resemble a human’s eyes.

Finally, the last trait that sets the spotted horse apart from other horse breeds is their mottled skin. This means the skin is spotted with darker pigmentation in some areas, giving a freckled appearance. Appaloosas can have mottled skin on their muzzles, genitals, or surrounding their eyes. This trait will not occur on every Appaloosa. 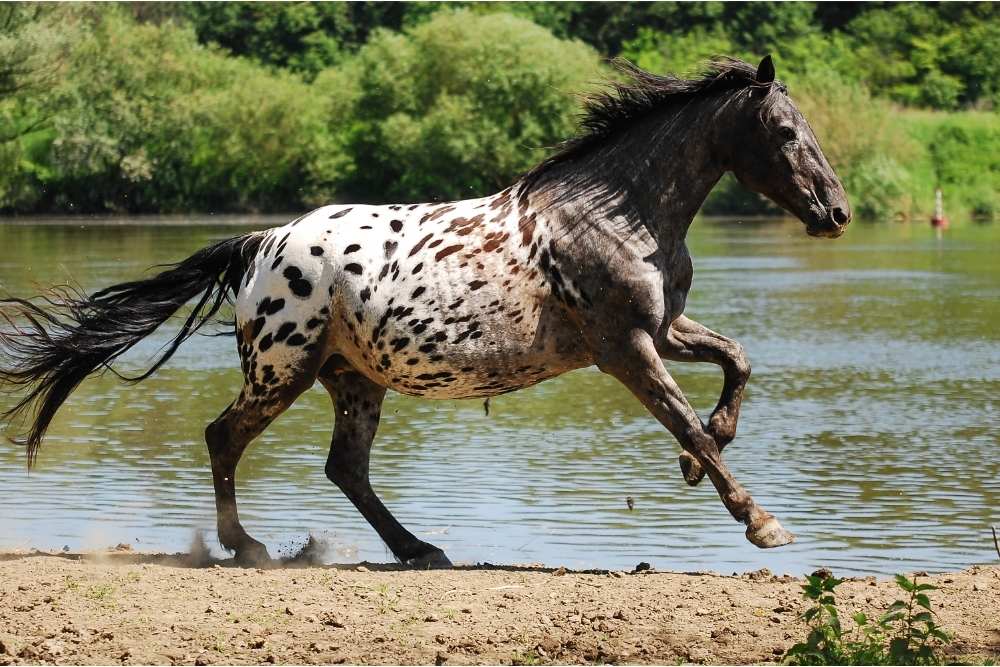 An Appaloosa horse typically stands between 56-60 inches (14-15 hands) in height, although some can get as tall as 64 inches. The average weight for an Appaloosa is anywhere between 950-1,200 pounds. Due to the influence of many breeds in their development, Appaloosas come in a wide variety of body types.

Appaloosas are an independent, intelligent, and gentle horse breed. They’re brave and adept at handling stressful scenarios. These traits made them ideal war horses because they could face the dangers of battle with no fear. Today, these same qualities make this particular breed one of the best riding horses in the world.

The temperament of an Appaloosa can depend on their relationship with their rider. If an Appaloosa senses their rider is inexperienced or unkind, their independent nature will take over and they will be willful and hard to govern. But if you pair an Appaloosa with an experienced rider, they will be respectful and sociable! An Appaloosa horse is almost always friendly, but they may not be the best choice for a first-time rider.

Appaloosa horses, or horses that resemble Appaloosas, have been living alongside people for thousands of years. Cave drawings in France, which are 20,000 years old, depict spotted horses that look like the Appaloosas we know today. Similar spotted horse images exist in Chinese artwork from the 7th century, and in Greek and Egyptian art from the 14th century. These documents provide fair evidence that the breed had been developing around Europe and Asia for hundreds of years before reaching the Americas.

The Spanish conquistadors brought Appaloosa horses to the Americas in the 15th century, where they were purchased or stolen by the Native Americans. The Nez Perce tribe of Oregon and Washington excelled at breeding the horses and helped the breed thrive in North America. Along with Mustangs, Appaloosas helped cowboys and native tribes during the early days of the unsettled Wild West.

The Appaloosas proved to be valuable companions to the Nez Perce Native Americans during the Nez Perce War in the late 1800s when they helped the tribe’s people avoid capture by European settlers. However, it was the European settlers that gave the breed its name. First, they deemed them the “Palouse horse” after a river in the northwestern region of the United States.

The name later changed to “Appaloosey” in 1938, which was the same year the Appaloosa Horse Club was established. Over time, the name evolved to Appaloosa, and it’s remained unchanged ever since.

How to Care for an Appaloosa Horse

Appaloosas were bred on large, open plains, and therefore they prefer to be kept in pastures. However, you can keep them in stalls without issues as long as they receive adequate exercise. The Appaloosa breed has a lot of energy, so they require regular exercise to keep them happy and healthy. They may get irritable if they don’t get enough exercise.

If your Appaloosa has non-pigmented skin on their muzzle or legs, those areas are susceptible to sun damage. To prevent sunburn, cover your horse’s muzzle. You can use a protective fly mask with an extended nose piece. Be sure that the mask is made of a UV-resistant material. UV-resistant leggings can be used for the legs. You can also use an equine-safe sunblock cream for these areas!

Training an Appaloosa can be easy or difficult, depending on how gentle you are with the horse. They respond better to trainers that are not forceful. Aggressive training will cause an Appaloosa to become rigid. Most will respond well to training that is well-paced and calm.

The Appaloosa is a very intelligent horse breed and can be taught to jump, race, and even accompany people on hunts. The breed has a long history as a show horse, and they’re prominent competitors in both English and Western disciplines. The Appaloosa likes having a job and will work hard to please its rider, given they have a good relationship.

Nutrition and Feeding for an Appaloosa Horse

A healthy diet of fresh grass, grains, fruits, vegetables, and hay will give your horse the nutrition it needs to thrive. Vitamin and mineral supplementation is recommended if the horse doesn’t have access to a pasture to graze.

Ensuring that your Appaloosa always has access to fresh, clean water is a must. There are rumors that an Appaloosa’s coat affects their diet preference, but there is no evidence to back up these claims. An Appaloosa prefers foods with a lot of sugar, like apples and molasses, but these should be given in moderation since they cause the horse’s teeth to rot.

The age and activity level of your Appaloosa will affect their nutritional needs – a horse that works daily will need more fat and protein in their diet than a horse that lives a leisurely lifestyle. You can feed your dog with CBD hemp pellets.

The Appaloosa horse has a solid base coat color underneath its markings. These base coats come in a wide array of hues and shades: roan, palomino, gray, chestnut, dun, grulla, bay, black, gray, and brown, just to name a few. Though every Appaloosa has unique markings, the spots often follow these clear, identifiable patterns:

This describes a white or black spotted horse.

A pattern of white and dark hair blending together to create a marbled pattern.

A snowflake has a dark base coat with lighter-colored spots or specks on the body, especially on the haunches. These coats can become more spotted as the horse ages.

An Appaloosa horse with a solid base coat and a large white spot that covers the haunches. This spot, or “blanket” can include other spots of color. This pattern is also called a “snowcap”.

A mottled Appaloosa horse has dark spots on its coat where skin mottling occurs. These spots can be sparse or plenty.

An Appaloosa horse with a frost pattern typically has a white base coat with roan marking on its hips.

Famously known as spotted horses, Appaloosas can have white or dark spots over any part of their body, on top of any base color. 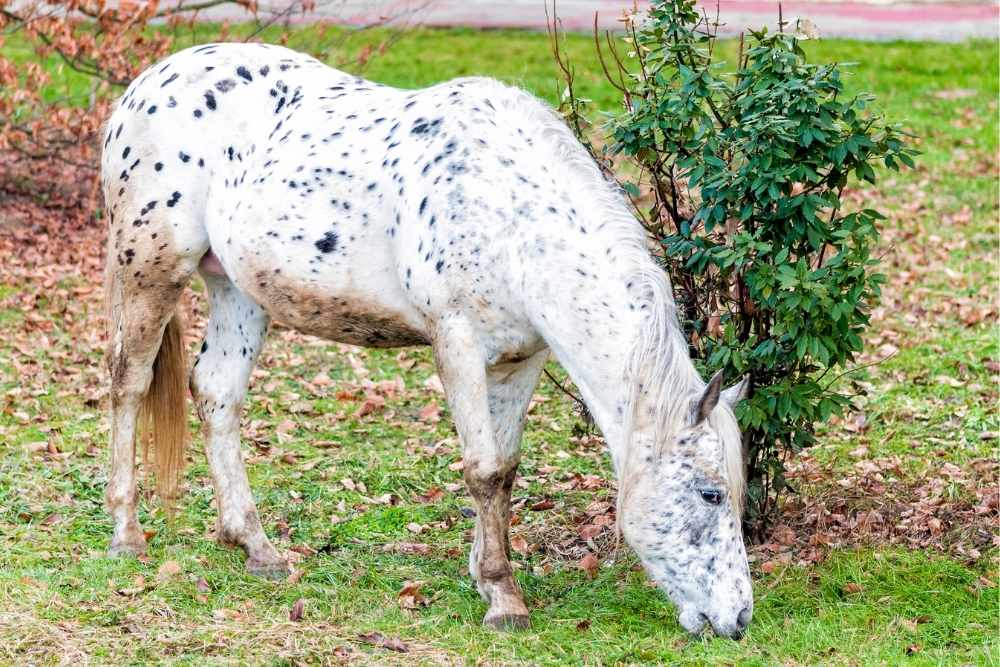 Compared to other horse breeds, Appaloosas are relatively healthy. However, they are prone to a few conditions. Always take your horse to the vet for preventative care and to get an early diagnosis of any problems that may arise.

An Appaloosa is more likely to get uveitis than other breeds. Uveitis is an autoimmune eye condition that causes the eye to become inflamed, leading to vision problems. The condition comes in recurring episodes and can lead to total blindness. Uveitis is usually treated with anti-inflammatory drugs, but there’s no cure.

Like other spotted horses, Appaloosas have very light-pigmented, photosensitive skin. This makes them more prone to sunburn than other horse breeds. To protect your horse from sunburn, cover their face, back, and legs with a UV resistant material when they spend a lot of time in the sunshine.

Congential Stationary Night Blindness (CSNB) affects the transmission of nerve signals between the eye’s rod cells and the brain. This condition is present in some Appaloosas at birth – those with a leopard coat are more genetically more prone to the condition. A horse with CSNB will have trouble registering different levels of light.

The price of an Appaloosa varies widely. You can find them on the market from anywhere between $1,000 and $10,000 USD. The price depends on the horse’s health, age, training, and pedigree.

You can find this breed from a reliable breeder, or at rescue shelters and local auctions in your area. When purchasing an Appaloosa, you want to spend as much time as you can with the horse before you buy it. This will give you a sense of its temperament and personality.

Always inquire about any health issues in the horse, and in the horse’s direct family. Unanticipated veterinary expenses can cost you anywhere from $5,000 to $8,000, and that’s no fun. Being aware of any potential health conditions your horse may have will save you the burden in the long run!

More About the Breed

An Appaloosa usually lives up to 30 years in captivity! This is a relatively long lifespan for a horse. They’re also fantastic racehorses. The fastest recorded speed of an Appaloosa is 41 miles per hour.

This beautiful, spotted horse is a hardy and personable mount that will bring joy to any horse enthusiast. Their lofty reputations in the equine community are certainly well-earned. Their amicable personalities will continue to make the Appaloosa horse breed a prime choice of companion for generations to come. 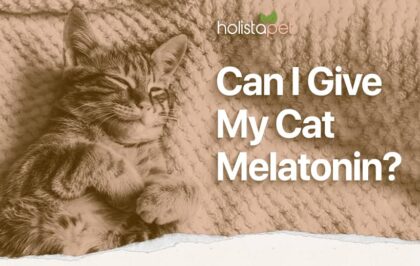 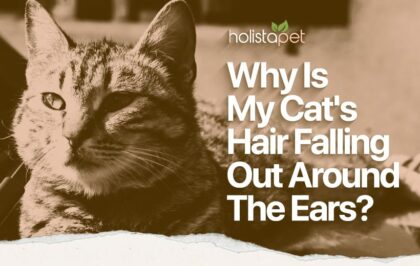