Marwari horses are one of the oldest horse breeds in the world. Once the ideal warhorse in India, these steeds were prized for their toughness and endurance by the Rathores of the Marwar region.

However, the turn of the 20th century saw the rise of the Arabians and Thoroughbreds, which nearly led to the Marwari breed’s extinction. Today, Marwari horses number less than 5,000 in the entire world. They are part of an ongoing effort to bring them back to prominence.

Marwaris are light and agile riding horses. But, what makes them stand out is their inward-curved ears. The points of the ears nearly touch, sometimes forming a heart shape above their heads.

The Marwari’s unique ears contribute to their excellent hearing. They can also rotate their ears a full 180 degrees! These ears are especially important for a warhorse as they can detect sounds from far away and alert their rider of any danger.

Built for endurance rather than speed, the Marwari has less slant in their shoulders than other horse breeds. This shoulder angle allows them to easily pull their legs through desert sands and run for long distances. But, they cannot extend their stride as much as other horses, like the Arabian or Thoroughbred.

Marwari horses walk with an ambling gait, like a Tennessee Walking Horse. Their fast, four-beat pace makes for a smoother ride. This gait also contributes to their ability to travel long distances.

Marwari horses stand roughly 14-16 hands tall (56-64 inches) and can weigh anywhere from 750 to 1000 pounds. Male and female Marwaris are similar in size, with males being slightly larger by about one hand (4 inches) and 50 pounds.

They are a light breed, as the average horse weighs approximately 1500 pounds. Some breeders consider the Marwari to be a pony breed instead of a horse. The Marwari’s lineage traces back to a mix of Indian ponies and Arabians. This is why they are shorter and lighter than the average horse.

Bred to be the ideal warhorse, the Marwari horse is one of the most durable equine breeds. Through many generations of selective breeding, they learned to adapt to harsh desert weather and long periods without food or water. Not only that, they are brave and fiercely loyal to their owners.

Some Indian tales say that Marwaris protected their owners to the death on the battlefield. They remained a cavalry horse up until World War I. Their tenacious and wild attitude made them perfect for battle.

The Marwari’s impressive sense of direction was also a coveted trait. Often, riders would get lost in the desert and rely on their Marwaris to lead them back home. 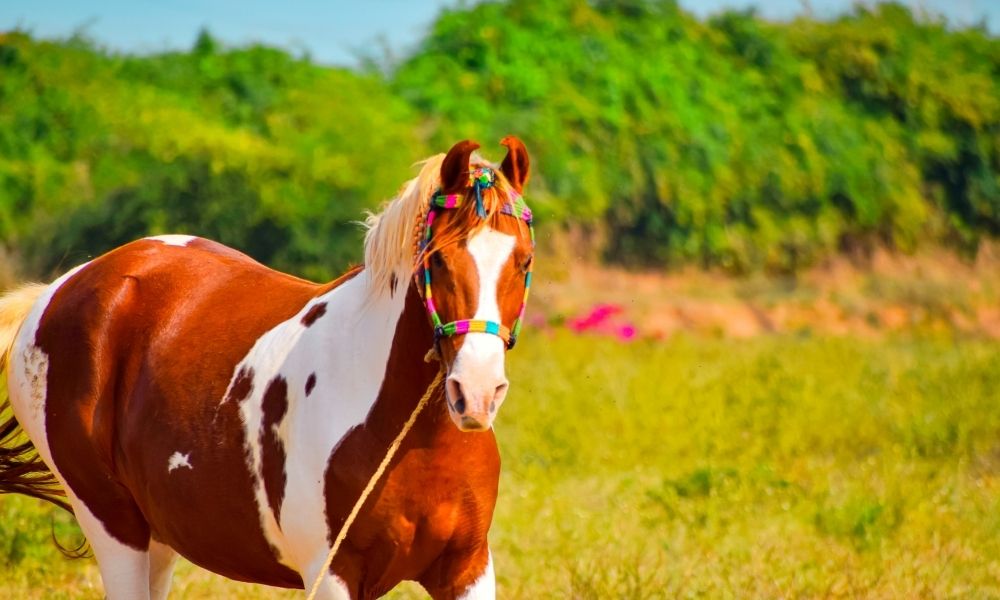 As one of the oldest breeds in the world, the origins of Marwari horses are not entirely known. Their genetic information tells us they descended from Arabian horses and native Indian ponies at some point.

The earliest accounts of Marwari Horses date back to the 12th century in Northwest India. They were prized warhorses, bred mainly by the Rathore warrior clan in the Marwar region. The name Marwari translates to “region of death” in Hindi.

The Rathore selectively bred Marwaris, looking to create a small but durable horse that could survive in the desert. They also had to be fearless enough to charge onto the battlefield with the soldiers. At the height of their day, only elite military families could mount Marwari horses.

When the Rathores lost their kingdom in 1193, they became a nomadic tribe. The Rathores relied on their Marwari horses for moving from place to place. Without the Marwari’s ability to endure extreme desert temperatures, the entire Rathore people may not have survived.

Marwari horses remained the cavalry horse of choice for many centuries until the late 1800s. Poor breeding practices led to a massive decline in their population.

Also, a period of British imperial rule led to the near extinction of the Marwari breed. When British soldiers occupied India in the mid-1800s, they preferred their Thoroughbred horses and eradicated Marwaris. The British also enacted laws preventing the Indian people from owning land, taking all their possessions.

Many Marwari horses were killed off, sold for cheap labor, or left to die. However, dedicated members of the Rathore clan were able to preserve the Marwari horses and save them from extinction.

Fortunately, the Maharaja (prince) Umaid Singhji, a Marwari enthusiast, stepped in to save the breed. He advocated for better breeding practices and made it his lifelong work to ensure the breed’s survival. His grandson, Maharaja Raj Singh II, continued his work after his death.

In 1995, Francesca Kelly embarked on her first trip to India for a luxury horse safari. Upon her arrival, she fell in love with the Marwari. She purchased her first Marwari, intending to export the horse back to the United States.

However, due to India declaring its native livestock as “national wealth,” she could not transport her horse home. As the stepdaughter of the British Ambassador of Cairo, Kelly continued fighting to bring the Marwari to the West.

After battling with the Indian government for five long years, she successfully brought home not one but six Marwari horses. She founded the Marwari Bloodlines organization to bring this endangered breed back to glory.

In 2006, India banned all horse export licenses, citing a concern that native breeding populations were being threatened. As a result, Marwaris are extremely rare today. It is not known how many currently exist outside of India.

How to Care for a Marwari Horse

If you ever have the luxury of caring for a Marwari horse, consider yourself lucky! Although they may be rough to train initially, with time, their intelligence will shine through.

Despite coming from a rough and wild background, Marwari horses are very intelligent and trainable. Though they are rare to find, you might spot them today in parades and ceremonies. They are also well-suited for equestrian sports, such as polo, dressage, or endurance riding.

Their unpredictable personality can make them stubborn and difficult to train at first. Marwari trainers must be patient and give them time to learn. Most horses need years of training to become show-ready. Dr. Maria Katsamanis, one of the premier Marwari experts and trainers in the world, believes the breed can master any discipline.

Nutrition and Feeding for a Marwari Horse

Built to survive in the desert, Marwari horses have a very efficient digestive system. They do not need as much fat or carbs in their diet as some other breeds.

Still, owners should plan to feed their Marwari a balanced diet that is appropriate for its activity level and size. The general rule of thumb recommended by the Humane Society is to give your horse “one to two percent of their body weight in roughage every day.” Roughage refers to grassy stalks like hay or alfalfa.

You can also supplement the Marwari’s diet with some grain or vitamins, but be careful and only provide these in moderation. A trusted equine veterinarian can guide you on the correct ratio of grain and roughage for your horse.

Due to their rarity, the Marwari’s specific nutritional needs are unknown. If you can attain one, plan to feed them high-quality hay and horse feed. A Marwari can also benefit from CBD pellets for horses. This special feed is designed to support a horse’s overall well-being by keeping them calm and helping their body maintain homeostasis.

Marwaris come in many of the standard equine colors. These include:

Marwaris have naturally short coats and thin skin to help them survive in the desert. Gray Marwaris tend to be the most valued in India, while piebald and skewbald are the most popular. The first Marwaris only came in black, but over time their coats diversified. Black is often associated with death in India, so black Marwaris are not favored.

Extra grooming may be necessary for Marwaris to protect its thin skin. This is especially important during humid seasons when bugs and flies are more prevalent. Marwaris also have naturally long manes and tails that you should brush often and detangle when necessary. Braiding the manes and tails can also help prevent tangles. 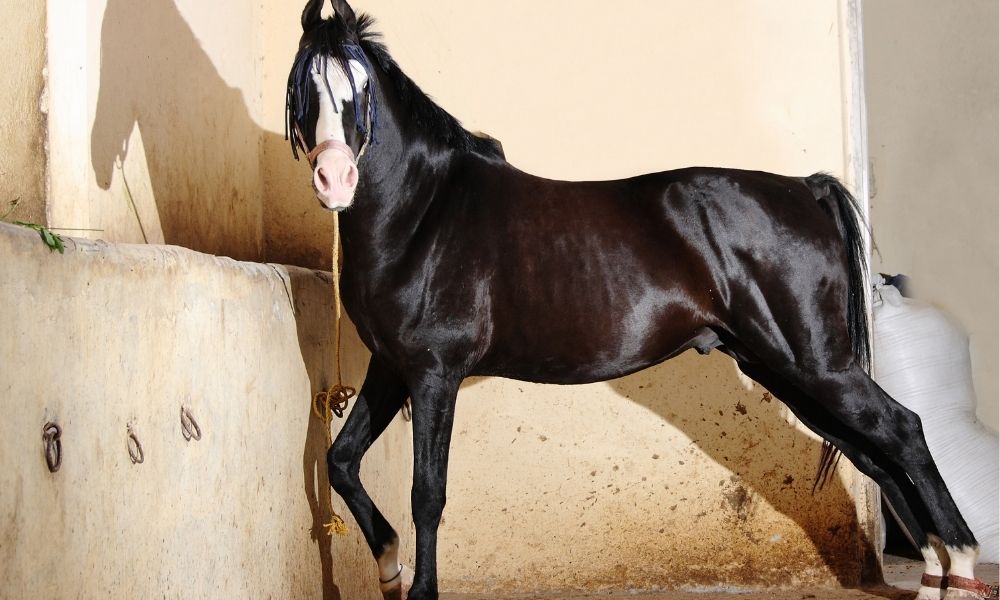 The full scope of health issues that may affect Marwaris is still unknown due to their rarity. For the most part, they are very healthy horses. Still, owners should check with a vet regularly and take steps to ensure their horse doesn’t suffer from the following common equine ailments.

How to Get a Marwari Horse

It is difficult to find a Marwari horse today, particularly in the United States. An adult Marwari horse in India can cost from $5,000 to 15,000, depending on color and purity.

Finding a Marwari for sale may be the biggest challenge to owning this breed. The exact price can vary greatly, especially if purchasing outside of India. Prepare to pay an excessive amount, along with thousands of dollars of shipping and transporting fees.

There are no widely available registries for Marwari horses. The best bet would be to check out any Marwari forums or websites and contact breeders online.

For more information, check out the Marwari Horse Society website. They are based in India but have plenty of great resources and educational tools for the breed. The organization is affiliated with the official Equestrian Federation of India.

Rooted in history as one of the most resilient breeds, the Marwari lives on as one of the rarest and most elegant horses. Most of us might never see a Marwari horse in our lifetimes.

Still, we can appreciate the efforts taken by so many to save this breed from going extinct. Hopefully, one day the entire world will be able to enjoy the beauty of the Marwari horse.