Most Terrier breeds are known for their big personalities, from the respectful but secretly mischievous Boston Terrier to the bossy and spirited Yorkshire Terrier. These are high-energy, independent dogs that were first kept around for hunting vermin. But the breed quickly became a family dog for these same qualities.

While most Terrier dog breeds have similar attitudes and energy levels, they couldn’t look more different! The Yorkie has long, straight, and glossy fur, while the Scottish Fold has a wavy beard. The Boston Terrier is ds/airedale-terrier/”>Airedale is tall and agile.

But even though the Terrier dog breeds are boxy and small, while the Jack Russell Terriers and the Rat Terrier.

Terriers bred with bully breeds, like the Bull Terrier and Staffordshire Bull Terrier, were originally used for bull-baiting and dogfighting in the 19th century. In the present day, these breeds are suitable for families and shows.

Toy Terriers are companion dogs, like the English Toy Terrier and the Yorkshire Terrier. But while they are small, most toy Terriers are not “lapdogs.” They still have the Terrier personality, making them highly active and spunky. 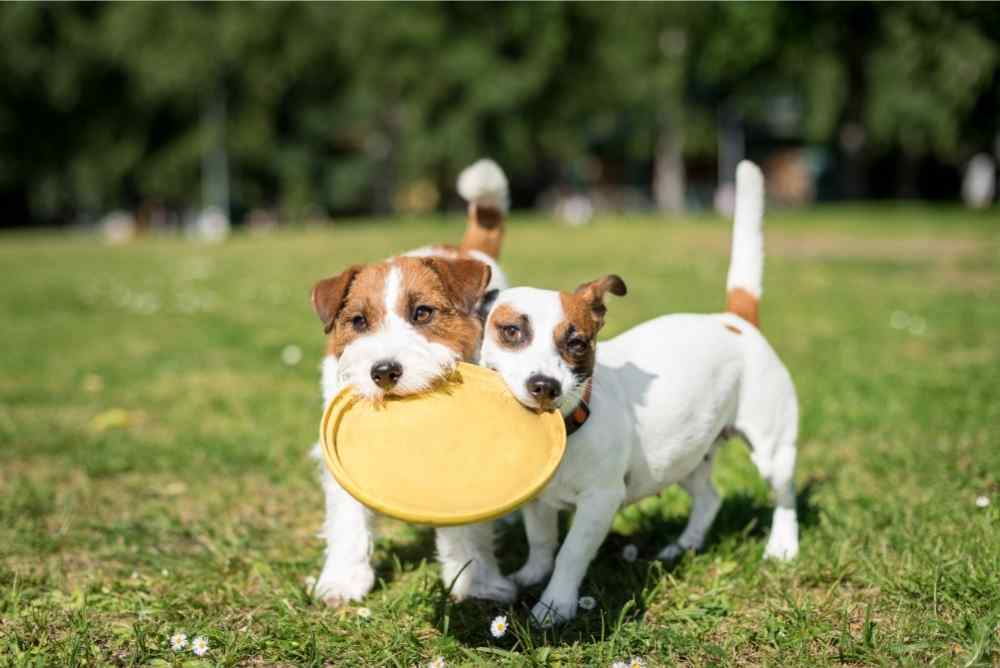 Terrier dog breeds are very popular due to their spunky personalities. And with so many breeds to choose from, there’s bound to be one with the traits your family desires. From large and playful to small and full of attitude, there’s a Terrier out there for you!

What Are Terrier Breeds Known For?

Terrier breeds were originally known for their hunting skills. This often surprises people when they see the regal appearance of the West Highland White Terrier or the quirky, small Boston Terrier. But these dogs were originally bred to hunt small vermin, including rabbits and rats. Some Terriers even hunted badgers and foxes!

But as more breeds developed, Terriers became popular for their personality as well. While Terriers have many quirks (like digging), they are beloved for their high energy, tenacity, and spirit. Most Terriers are very social and extremely loyal. They make great family pets, especially for active households.

Are Terriers Easy to Train?

In general, Terriers are not the easiest breeds to train. Terriers are very independent. Most breeds were initially meant to hunt on their own. They’d often roam their owner’s territory, seeking and killing vermin. They were expected to do this without a human present.

So while that makes Terriers incredibly smart, these breeds are often quite stubborn. They like to make their own decisions. And those decisions often revolve around having fun. Why listen when they could be running around the backyard, frolicking about freely?

Terriers also have many bad habits that make them difficult for some less experienced owners to deal with. The most prominent one is digging. Almost every breed of Terrier loves to dig around in the yard, destroy gardens, and get under fences. Terriers will need a lot of outdoor supervision and dedicated training to keep them from further destruction.

Terrier dog breeds are also known to bark. They won’t only bark to warn you of intruders, either. Terriers will bark for fun. Sometimes it can be hard to stop this habit as well. This is a courageous dog that doesn’t like to back down to anyone, including you!

Always bring your puppy to obedience classes to help you learn training techniques and get them properly socialized at a young age. From there, be consistent. And don’t play hard to get with the treats. Terriers are very food motivated! With firm, consistent training, your Terrier will learn that you are the boss of the household and respect you (a little bit). 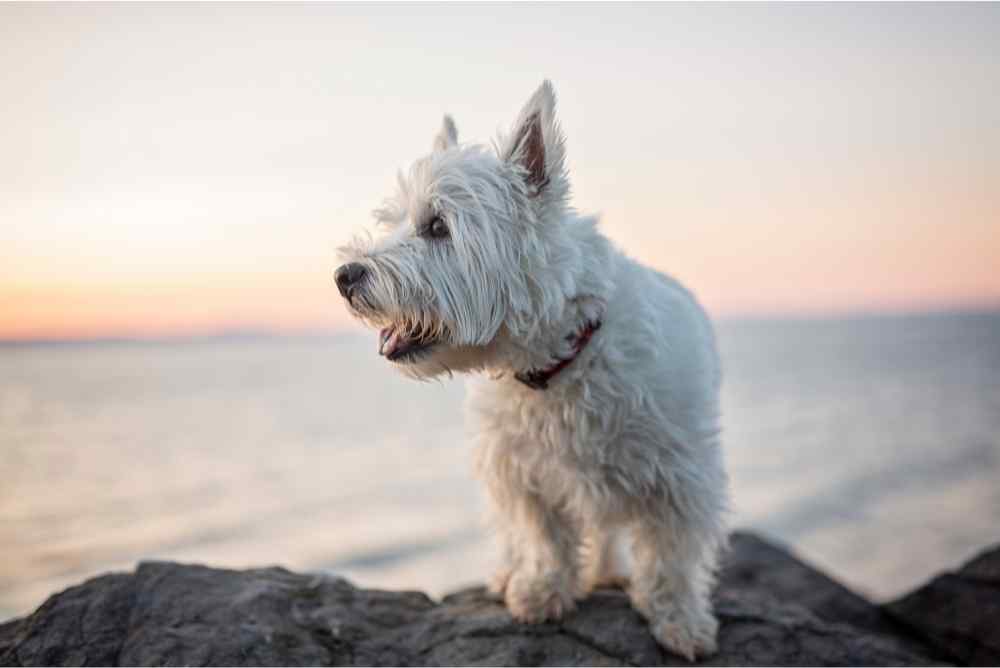 How Many Terrier Breeds Are There?

While they share some of the same characteristics, like being feisty and having wiry coats, they come in a pretty wide variety!

What Are the Most Popular and Common Terrier Breeds?

Because Terrier dog breeds are so tenacious and spunky, they have become very popular pets everywhere. They are also very talented hunters with determined personalities and big hearts. The Yorkshire Terrier is currently the most popular Terrier breed, coming in at 14 out of 195 recognized breeds. Boston Terriers are 21st, and West Highland White Terriers are 44nd.

The Yorkshire Terrier looks quite dainty and elegant with its long, glossy coat. Some owners will even take the long, silky hair atop the dog’s head and put it up in a bow!

But this toy-sized Terrier is a Terrier through and through. Before becoming a toy-sized lapdog, the Terrier was a rat hunter! This dog is feisty, tenacious, and even a bit bossy! This dog has a HUGE attitude, which has put this spunky canine at the top of the list of popular Terrier breeds.

Yorkshire Terriers are loyal and loving. They always try to make their loved ones laugh. This is a life-long companion through and through. And did you know this breed is hypoallergenic? If you want a watchdog that loves to cuddle and play, this is the dog for you! 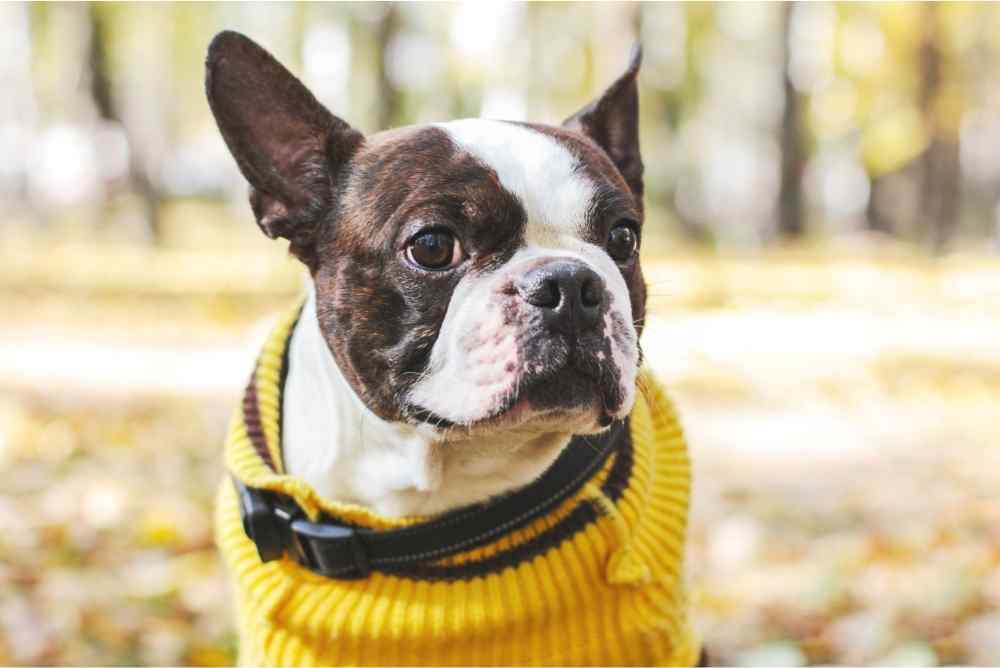 The Boston Terrier is one of the most recognizable dogs on this list, thanks to their big, friendly eyes and flashy “tuxedo” coat. This dog often looks like it’s smiling, with its tongue often hanging out. Their square head and short muzzle give them a very distinct and memorable face, unlike any other breed.

This small, short-tailed breed should weigh no more than 25 pounds. But while they’re pretty compact, the Boston Terrier is full of energy. They love to entertain, looking for various ways to make you smile. These dogs can be a bit mischievous as well; they have an air of curiosity about them, always looking for something fun and new to do.

According to the American Kennel Club, the Boston Terrier earned themselves the nickname “The American Gentleman” because of their impeccable manners. This dog is perfect for the big city since they are not particularly destructive or over-energetic. Still, they love a brisk walk around the neighborhood or a romp in the dog park!

The Westie is a smart and confident dog that doesn’t need any pampering. Instead, this breed loves to play. This breed is surprisingly strong and tough, thanks to its original job of hunting rats and other underground rodents.

While loving and loyal, the West Highland White Terrier has an independent streak that sometimes makes them difficult to train. They love to chase after just about anything that moves and love to dig. A lot. With patience, this smart dog can be trained. But never expect this dog not to have a sassy, mischievous streak.

The Scottish Terrier instantly makes people think of Aristocats, where a Scottie stole the show with his prim and proper demeanor. But Scottish Terriers IRL are a bit rambunctious and aloof. Despite their classy appearance, the Scottie loves high-energy play sessions and chasing cats.

Scotties are sometimes called “The Diehard” because of this breed’s persistence. They are highly alert and often described as “businesslike.” They are aloof with strangers and wary of other dogs, making them effective watchdogs.

But with their own family, this is a loyal breed admired for its boldness and cleverness. Short-legged with an often black wiry coat, the Scottie is a one-of-a-kind breed that has a personality as unique as its appearance.

The Soft Coated Wheaten Terrier is a sturdy breed that’s 19 inches tall and 40 pounds. It is hard-muscled underneath its soft coat, making it the perfect working dog for the ranch.

Originally an Irish farm dog, the Soft Coated Wheaten Terrier has a personality that’s a bit different from other Terriers. This breed is easier to train than most, usually more adaptable to family life and the hierarchy that comes with it. But this breed still has a stubborn side underneath its friendly, loving exterior.

This working Terrier is described as “an iron fist in a velvet glove” by the American Kennel Club. But that isn’t just because of its muscular body hidden behind the fluff. This breed has a dual personality, appearing sweet at first but revealing a cheeky, mischievous side when you least expect it. 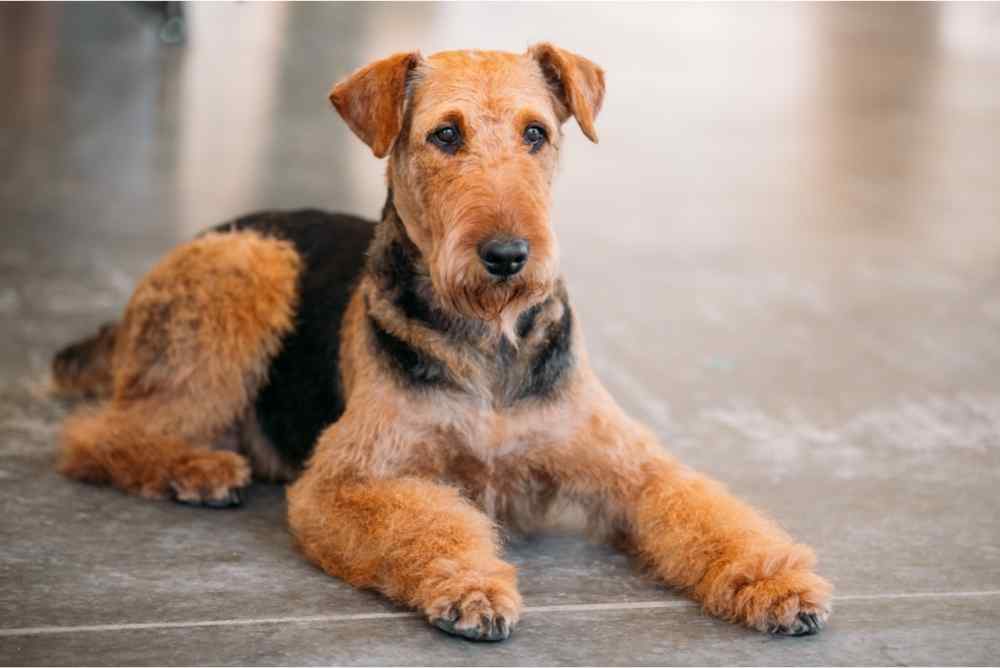 What is the Biggest Terrier Breed?

The Airedale is the largest of all Terriers, earning the nickname “King of Terriers.” Males stand about 23 inches at the shoulder, females a little less. Males can also reach more than 60 pounds.

The Airedale has a big personality to match. This intelligent dog is one of the most versatile dog breeds out there, distinguished as a hunter, athlete, and companion. This is a bold and determined Terrier breed that’s (surprise) a bit stubborn. But with the right owner, the Airedale doesn’t mind stepping away from the leadership role. Their intelligence and loyalty allow them to excel at a variety of sports and organized athletic competitions.

The Airedale is also an excellent family dog. While gentle and patient with children, this breed is quite relentless as a watchdog. They are known to never back down from protecting their home. This is a breed with an “unflagging spirit” that is not known for giving up.

The Airedale Terrier has long, muscular legs and a long head, giving them a regal and agile appearance. They have dark eyes, folded ears, and a beard and mustache. When combined, these facial features make the Airedale appear alert and showcase the breed’s intelligence.

What is the Smallest Terrier Breed?

At 10 inches tall and 11 pounds, the Norfolk Terrier is one of the smallest working Terriers. But while small and cuddly, this breed has the tenacity and energy of a dog three times their size! This toy-sized dog is feisty and confident.

Because of their size and personality, the Norfolk Terrier has become quite a popular breed to travel with. They are sturdy and versatile, making them always game for an adventure. This is a dog breed that’s known to be “up for anything,” making them excellent travel companions.

The Norfolk Terrier is a Terrier through and through. While loving and cuddly, this breed can’t be cooped up inside all day. It needs some high-energy exercise to stay happy. They might even hunt rodents without being asked! This fearless dog makes a great watchdog but can sometimes be a bit jealous with their owners.

From the tiny Norfolk Terrier to the tall Airedale, all Terrier dog breeds are confident, stubborn, and energetic. Thanks to their ancestry as vermin catchers and hunters, Terriers are used to making their own decisions and working independently.

But that hasn’t stopped them from being great family pets. Terriers are loyal and loving breeds that love nothing more than cuddles and making you laugh. If you’re looking for a dog breed that loves to romp around outside but also has a soft spot for napping together on the couch, a Terrier breed is most definitely right for you!