Humans have been sharing food and shelter with dogs for over 100,000 years. Today, the bond we share is evident, with nearly 43 million American households owning one or more dogs. We want what’s best for our tail-wagging companions. This includes taking care of their health and well-being throughout their lives. As a result, it’s best to understand what possible health and dietary supplements there are available for optimizing their health. This is where chamomile shines, as it has a wide variety of health benefits for dogs.

What is Chamomile?The American English language refers to it as “Chamomile”. However, according to British English, it is “Camomile”. Both names derive from the Greek word “Khamaimelon” which translates to “earth apple” because of its mild apple-like scent.

Chamomile is an ancient flowering plant with its uses dating back to Egyptian times. Back then, they would use chamomile to help cure fevers. Can you imagine King Tut chilling his fever with some chamomile? Fast forward to today, where many people are using chamomile for the calming effects it offers them or their pet, but that’s not its only benefit.

Chamomile is actually the common name of several different daisy-like plants found in the taxonomic family Asteraceae. There are two variations of the chamomile plant which people use for consumption or health purposes. These are: 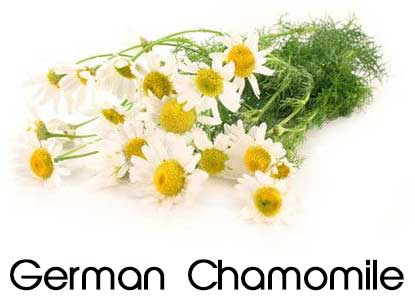 This is also known as Hungarian, wild, or genuine chamomile. However, people most commonly refer to it as “German” chamomile.

This variety is the most popular amongst consumers. It has the ability to grow up to 2 feet tall. 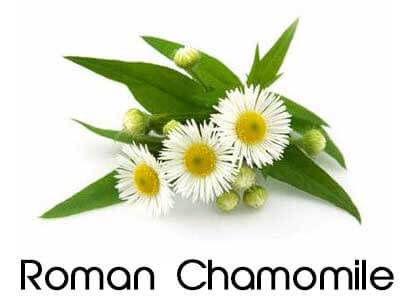 This variety is most commonly referred to as “Roman” chamomile. However, English, Scotch, garden, lawn, sweet, true, or common chamomile are other less common names some people use.

This is a perennial plant (meaning it lives for more than 2 years). It can grow up to about 1 foot tall and it has thicker leaves than German chamomile.

The essential oil extract from Roman chamomile is pale yellow to clear in color. This oil contains esters of angelic and tiglic acids. These acids reportedly give this variety its calming and pressure releasing effects, as well as its distinct odor.

Both species resemble daisies. They have white petals encircling a yellow center. Although they both are quite pretty, they are primarily used in traditional remedies to make several kinds of herbal infusions.

Because of its the plant’s properties, chamomile tea may provide relief for skin soreness. A small study in 1987 showed improved the look of skin and reduced soreness when concentrated chamomile tea was applied onto the skin.

Chamomile also has limited antimicrobial properties. While it may not be potent enough for many dogs, if your dog has irritated or itchy skin, or if your dog has a skin issues, chamomile can be used as a soothing and antimicrobial skin rinse. Additionally, you can combine chamomile with peppermint or calendula tea as well as aloe vera juice, then the soothing properties will be enhanced.

Topically, chamomile can be applied onto the skin directly to relieve soreness. There are not many studies looking at the oral administration (i.e., drinking chamomile tea) in animals. However, some laboratory animals did get relief of skin irritation when chamomile was given by mouth as a liquid extract.

Chamomile may also be helpful for dry eye in dogs. One study of 20 dogs showed good response when a topical solution containing chamomile was applied to dogs’ eyes along with the traditional, veterinarian-recommended eye application.

Chamomile has relaxing properties. This is why so many people drink chamomile tea to help them go to sleep or to relieve stress.

This hasn’t been thoroughly investigated in dogs, but they may benefit from the same calming effects as people. In fact, you will find chamomile in certain calming dog treats due to the relaxing effects it offers.

Parasitic worms are a common problem with dogs. Limited research and extensive evidence suggest that chamomile may have some limited efficacy against some of the major worm infestations. However, it’s important to stress that chamomile has not been proven to be as effective as the prescription veterinary products. Because parasitic conditions can be life-threatening in some cases, it is very important to discuss anti-parasite options with your veterinarian before relying only on chamomile.

As you can see, chamomile can be a wonderful and effective addition to your dog’s nutrition supplement regimen. Just be sure to apply it safely.

Is Chamomile Safe for Dogs?

While chamomile is commonly used by owners as an at-home remedy, most of the evidence for its efficacy comes from traditional herbal experience in humans, studies on laboratory animals, and individual veterinarians’ experiences. This means that there have been no large-scale, controlled trials in either humans or pets, including dogs.

In general, chamomile is safe for dogs unless they ingest a large quantity or use it for a long period of time. However, it is important to remember that because no large-scale studies have been performed, we don’t know the proper dosing for dogs for different conditions, and we don’t know how much is “too much”. Because of this, it is always important to discuss with your veterinarian before giving chamomile to your dog. 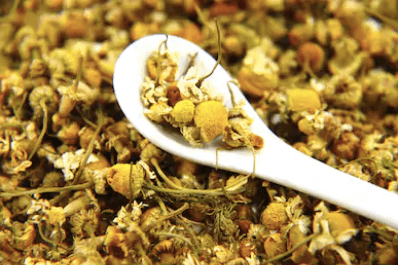 How to Give Chamomile to Dogs

There are a number of ways to give chamomile to dogs. For skin diseases, you can apply it topically or give it by mouth. For dry eye, there are many diverse ways that you apply directly into the eye.

If you buy supplements, it’s important to do some research on the manufacturer. This is because supplements are not regulated by the FDA and some supplements may not contain what the ingredients label says. The strength of chamomile can vary depending on the preparation, and there may be contaminants in a product that are not listed on the label. One important way to evaluate a product is to check whether there is “third-party testing.” This is when an outside company evaluates the product for quality assurance, including ingredients and contaminants.

But why go through all that trouble? An easier option is to give them dog treats that contain chamomile along with other beneficial additives. You’ll be supercharging their nutrition and supplement regimen with a single product. Furthermore, you can easily use the treats to train your dog or reward them for good behavior.

This has a calming effect.

As discussed above, chamomile has a wide variety of benefits, including its usefulness in calming stress, fear, or restlessness.

This calms your mood and is rich in highly nutritious protein. It also contains amounts of magnesium, phosphorus, iron, calcium, potassium, and zinc along with vitamins A, B, C, and E.

This groundbreaking hemp extract has a wide variety of benefits for dogs. Basically, it may encourage overall health and wellness by promoting balance. It may help to keep the body in a state known as homeostasis.

To add these treats are 100% vegan, organic, non-GMO, non-psychoactive, gluten, and dairy-free. Reward your fluffy companion today with these nutritious and healthy treats – they’ll thank you for it! Additional info can be found here.

Dr. Carine Laporte was born and raised in New York. She graduated cum laude from the University of Pennsylvania with a Bachelor of Arts in Biology. After graduation, Dr. Laporte participated in research at the Hospital at the University of Pennsylvania (HUP) that focused on human cardiothoracic surgery. Dr. Laporte completed her Doctorate of Veterinary Medicine from the University of Pennsylvania School of Veterinary Medicine in 2012. Following veterinary school, Dr. Laporte completed a year-long internship at Texas A&M University, where one of her primary roles was to help teach fourth-year veterinary students in various veterinary specialties, including dermatology. She completed a three-year residency in veterinary dermatology with Dermatology for Animals and became a board-certified veterinary dermatologist in 2017. Dr. Laporte remains dedicated to the combination of teaching, research, and clinical practice in order to advance the profession of veterinary medicine. She was a recipient of the Peter J. Ihrke Resident Research Award during her residency. She has had the opportunity to author and co-author book chapters and several published articles both in the field of human cardiothoracic surgery and in the field of veterinary dermatology and pharmacology. Over the years, Dr. Laporte has had a large family of pets, including two black gerbils, three cats, an Australian Kelpie dog, numerous fish, a parakeet, several pet rats, and two albino African clawed frogs. Her current animal family includes two dogs named Linus and Saian, a cat named Mina, and a tortoise named Shelldon.