Loud, intelligent, and mischievous. Thinking Siamese? Close, but not quite. The Oriental Shorthair has become one of the most popular cat breeds throughout the world, thanks to its friendly, affectionate, and energetic personality. Because of the breed’s enormous ears, Oriental Shorthairs are hard to miss!

The Oriental Shorthair is a cat breed that’s most known for its wide variety of colors and patterns. Because of their unique look and wide range of colors, the Oriental has become one of the most desired breeds in the world!

The Oriental Shorthair is an old cat breed with a rich history. They were one of the many types of cats that royalty kept in the Royal Palace of Siam. Early portrayals of the Oriental Shorthair were depicted somewhere between 1350 and 1767 in a manuscript called The Cat-Book Poems.

Orientals were originally one of the few native cats from Siam and came in many different types of colors and patterns. The cats were also slim and lanky and had big ears with a tapered muzzle. People immediately assumed the Cat-Book Poems were referring to the Siamese breed, but the Oriental Shorthair was just as important to the people of Siam.

The earliest ancestors of Orientals originated from Thailand to England. These early blue-eyed, Siamese-like cats became very popular in Europe throughout the 1890s. By the 1920s, this particular Siamese look became known as the standard for the breed.

In the 1950s and 60s, breeders decided to incorporate felines that weren’t native to Siam. They started purposefully crossing Siamese with domestic cats and Russian Blues to get a broader range of colors and patterns. American breeders were fascinated by the cats’ unique look and started breeding their own versions by crossing Siamese and Abyssinians.

At the beginning of the Oriental’s creation, Siamese breeders had a disdain for the hybrids. They didn’t want people messing with the Siamese cat’s body type and unique personality traits, and they didn’t want another Siamese-type cross. Still, the Oriental Shorthairs continued to gain popularity despite the balking of some cat breeders.

In 1972, the Cat Fanciers’ Association (CFA) accepted Oriental Shorthairs for registration. Five years later, they received full championship status. Since then, the Oriental Shorthair has become one of the most popular shorthaired breeds in the United States and beyond.

Breeders even created a longhaired version of the Oriental. The longhaired variety came in all of the same colors and patterns and had the breed’s lean body and silky fur. Then in 1995, the Oriental Shorthair and Oriental Longhair became a single breed, known simply as the Oriental.

The Oriental is clever and highly intelligent. Regrettably, this means that the Oriental Shorthair probably won’t listen to you at times. They can also be mischievous, quirky, and curious, which might get them into a bit of trouble.

While Oriental Shorthairs may not always listen to your commands, they always look for attention — especially from their favorite humans. They often latch onto one person in the household.

The Oriental is a loyal breed that always tries to get involved in anything you’re doing. Even if it’s as mundane as doing the laundry, the Oriental wants to be included somehow.

The Oriental has one surefire way to get your attention: their loud vocals. While the sound of their meow differs from cat to cat, Orientals are usually quite talkative. They are always meowing to get your attention, which their owners often find endearing and comical. The Oriental is definitely not a cat for someone who wants some peace and quiet.

Once they have your attention, Orientals love to play. Even as adults, the Oriental remains playful and energetic. They often play with random items around the house, or they might climb into a drawer to get something more shiny and intriguing.

Orientals love to chase, swat, leap, and hunt around the house. They love to entertain humans, although they will become distraught when scolded or ignored. They enjoy a good hangout session on the couch and even walking on a leash if trained.

This cat needs constant affection to live a happy life. They are best suited for families that can spend time with them throughout the day.

Although the Oriental has a strong personality, this breed is mainly known for its unique appearance. What makes them stand out most is their oversized ears, which look even more massive because of their thin bodies and narrow face.

They are also popular due to their variety of colors and patterns. The Cat Fanciers’ Association likes to say there is an Oriental for everyone!

Orientals are a smaller breed and typically weigh between 9 -14 pounds. They can grow to a height of 9-11 inches and about 11-14 inches long.

Not only are they light and small, but Oriental Shorthairs are also graceful and sleek. They have delicate bones and firm muscles, giving them a long and slender look.

The Oriental Shorthair’s face is a long tapering wedge, starting at the nose and flaring out in straight lines to the tips of the ears. This feature gives their head a triangular shape. Their long, straight nose is a continuation of the forehead, giving them a distinctively wild appearance.

This breed’s slanted, almond-shaped eyes are incredibly striking. They are often vibrant, coming in shades of green and blue.

Their eye color can depend on their coat pattern and color. For example, a white bi-color Oriental will have blue eyes. Orientals are also known to have odd-colored eyes, meaning each is a different color.

Their ears are strikingly large with a wide base that continues along the lines of the wedge.

Like their body, the Oriental’s legs are slim and long. They have dainty paws and their hind legs are longer than the front. They have five toes in the front and four in the back.

The Oriental Shorthair was developed to explore “all of the possibilities of color and pattern.” According to the CFA, Orientals can come in over 600 color, pattern, and coat length combinations.

Orientals most commonly come in four different tabby patterns — classic, mackerel, spotted, and ticked. The CFA notes that there are 112 different tabby combinations for Orientals.

The Oriental also comes in bi-color patterns, which were accepted in 1995. Pointed colors are accepted as well. Both patterns have a following of “devoted fans.” 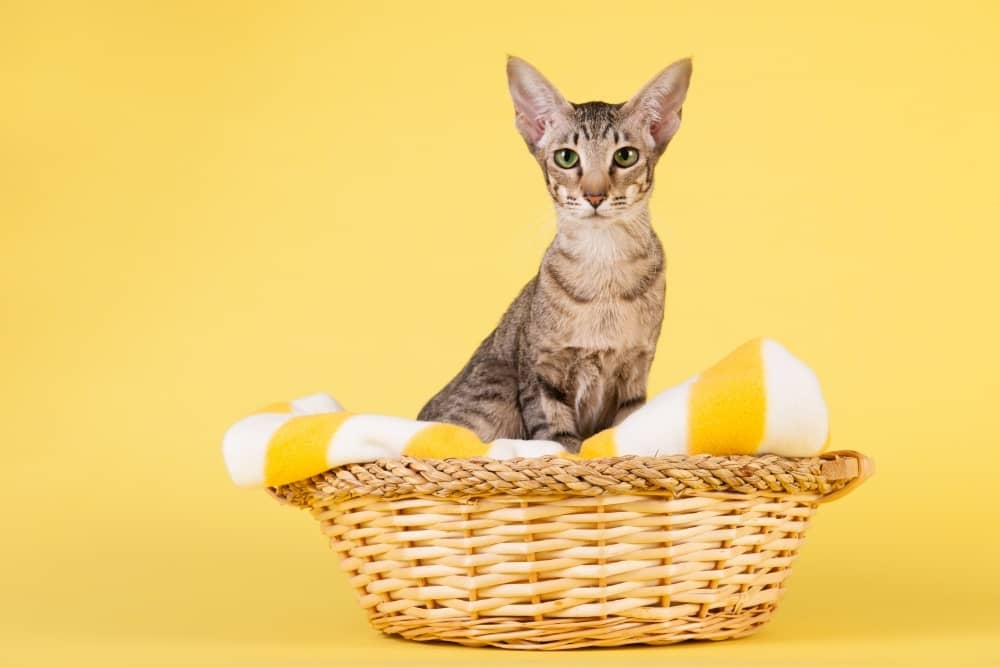 Healthy Oriental Shorthair cats can live an average of 15 years, typical for most house cats!

The Oriental Shorthair should never be left alone for extended periods. They are a breed that will become very sad and withdrawn without family around. Orientals that are not getting the attention they crave may also act out in destructive ways, like scratching up sofas or digging around in cabinets and drawers.

To keep your Oriental Shorthair stimulated, look for new ways to play with them! Try teaching them some tricks so they can entertain family and guests. You can also give them elevated areas to climb on, like cat shelves or trees.

Still, you’ll want to brush your cat weekly to avoid excess hairballs and shedding. Brushing also keeps their coat sleek and shiny. Dental care for cats is important! You should brush your Oriental’s teeth regularly to prevent dental issues. Keep an eye on their ears for dirt and wax buildup.

The Oriental shares many similar health problems to the Siamese since both breeds have a close genetic history. While the breed is generally healthy overall, the Oriental Shorthair is known to carry some hereditary health conditions, so regular veterinary visits are essential!

Here are some issues to be on the lookout for:

Always check that your breeder is trusted and responsible. The CFA provides a directory for you to find reputable breeders across the country. Responsible breeders will know what health problems the Oriental carries and avoid breeding litters with that condition.

The Oriental Shorthair requires a diet rich in protein, like all domestic cats. Look for cat food with a rich protein source as the first ingredient, like chicken or salmon.

It’s best to avoid cat food that’s heavy in carbohydrates. These are “fillers” since cats don’t need them at all. Carbs are what make cats allergic to food or gain significant weight.

Instead, try an automatic cat feeder that spreads out their portions at set intervals. This will keep them consistently fed throughout the day!

Oriental Shorthair cats are not just good with other pets — they often need other pets’ company. Many Oriental Shorthair owners adopt two at the same time, allowing them to bond and grow together. You’ll often notice that Orientals like to stick close together, with one often following the other’s lead. Of course, they get along with other cat breeds and even dogs as well.

Children will also enjoy playing with Orientals and teaching them tricks. This feisty cat breed loves to play and will endlessly entertain kids. Just make sure to supervise interactions with younger children at first!

Unlike the Persian — who is often thought to be one of the “dopiest” cat breeds — the Oriental is considered the most intelligent. They are said to be even more curious than the typical cat. Even though their intelligence can often get this kitty into trouble, most breed enthusiasts can’t deny the Oriental’s charm.

Oriental Shorthairs can cost around $500 to $1,000 in North America. However, most owners consider this money very well spent. They are not only entertaining and playful but loving and loyal. Just make sure you can give them enough attention!