The Turkish Angora cat looks exquisitely fancy, with its long, silky fur, inquisitive eyes, and elegant, lean body. But it’s so much more! The Turkish Angora is exceptionally beautiful — and also cheeky, curious, intelligent, energetic, and playful. They are social cats with lots of love to give and a caring, affectionate personality.

This cat breed loves to spend time with their owners and be a part of whatever they’re doing. They are also fun to watch as their playtime can be quite entertaining. This is a talkative and curious cat that gets along with everyone in the household. Find out more about this one-of-a-kind, beloved feline!

The Turkish Angora is an ancient breed with a mysterious past. Cat fanciers often wonder where their long, luxurious fur came from. It was first believed they might have originated from a wild species known as the Palla’s Cat. Others speculated they developed from the African Wildcat.

The Turkish Angora was originally named after the capital of Turkey. However, in the 1930s, Turkey changed the capital’s name from Angora to Ankara. Turkish Angoras are sometimes referred to as Ankaras today.

The recessive long hair mutation likely happened centuries ago in Turkey. A French naturalist named De Buffon wrote in the late 1700s that long-furred felines came from Asia Minor, a southwestern region of Asia that includes parts of Turkey. These long-haired kitties have been present in Turkey ever since.

Persians and Angoras were bred indiscriminately, making the Angora slowly disappear as its own breed. By the 1900s, the Turkish Angora had almost vanished. Thankfully, the Turkish government started a breeding program to preserve the Turkish Angora’s original look (pure white with blue eyes). This Ankara Zoo-funded program continues to this day, with an emphasis on odd-eyed Angoras.

For a while, it was incredibly difficult to obtain a Turkish Angora since they were valued so highly in Turkey. However, in 1962, Liesa F. Grant exported a pair of Turkish Angoras to the United States. Soon, other breeders followed despite the extensive and complicated process. 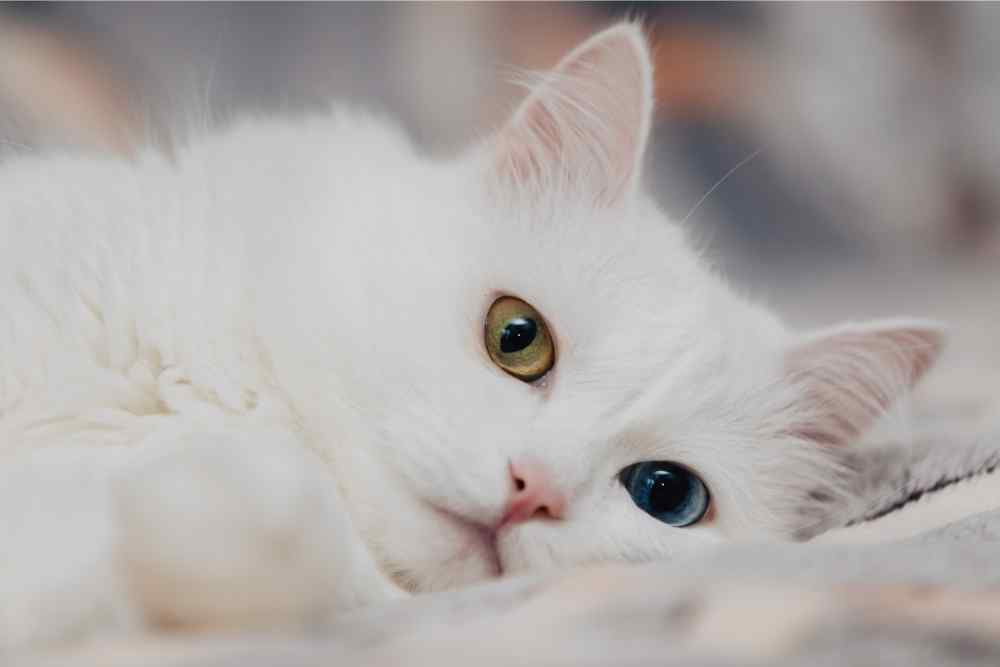 The Turkish Angora is one of the most friendly breeds out there! Turkish Angoras are quick to bond with their owners and always want to be a part of whatever their family does. Whether you’re folding laundry, working out, or cooking dinner, the Turkish Angora will always find a way to be right in the middle of the scene, meowing and purring the entire time.

Don’t even think of leaving your Turkish Angora out of the action! Brilliant problem solvers, Turkish Angoras will figure out a way to open the door or pick the lock so that they can check out what you’re up to. If they can’t find their way in, the clever and clingy Turkish Angora will start messing with what’s available to them, whether that be your couch, cabinets, and counters. It’s safe to say this isn’t a cat you can leave alone for long periods every day.

The Angora is known for being stubborn. Once they have a plan or idea in mind, they’ll do anything in their power to make it happen. This includes playtime, which they will often demand.

Graceful and energetic, the Turkish Angora is entertaining to watch. This includes pouncing on a scrap of paper or chasing a laser pointer down the hall. Some Turkish Angoras even enjoy swimming! While talkative, demanding, and affectionate, the Turkish Angora doesn’t enjoy being held. Sill, you can enjoy hanging out with your Turkish Angora, admiring their glorious fur, and chatty discussions.

The Turkish Angora is renowned for its glorious, pure white, silky fur and brightly colored eyes. The Cat Fanciers’ Association (CFA) describes this feline as “elegant and finely boned creatures.” Their features make them appear graceful.

The Turkish Angora is a small or medium-sized cat that typically weighs between 5-9 pounds. Males are slightly larger than females. Their body is long and slender with firm musculature. The Angora’s tail is long with a full brush.

The Turkish Angora’s head is proportionately sized to their body. It rests upon a slim, graceful, and a rather long neck. Their nose is medium length, and they have a firm and well-rounded chin. Their large, wide ears are pointed and sit high atop their head. They appear erect, with a tuff of fur on the tip.

The Turkish Angora has large, almond-shaped, slanted eyes. Their eyes can be blue, sky blue, sapphire, green, gooseberry, emerald, green-gold, gold, or amber. The Angora’s amber eyes will often have a greenish ring. They are also known for having heterochromatic eyes – one blue and one green or amber.

This lovely kitty has long legs! The hind legs are a bit longer than the front. Their paws are small, round, and even described as dainty.

The Turkish Angora’s fur is long, gorgeous, and single coated. The length may vary, but the tail and ruff are the longest and fullest. They also have “britches” on their hind legs. The Turkish Angora doesn’t get its full coat length until it’s about two years old.

While the breed was once only accepted with a white coat, they are now available in various colors and patterns. The most common colors are white, chocolate, lavender, and red. The CFA lists numerous acceptable coat patterns, including a variety of tabby patterns, tortoiseshell, calico, and bicolor.

The Turkish Angora’s long fur is surprisingly easy to maintain. It’s soft and silky, meaning it rarely mats. According to the CFA, most breeders recommend combing once or twice a week with a fine-toothed comb or slick brush. Brushing removes excess fur and keeps their coat looking sleek and healthy.

This long-haired breed loses some of its coat during the hotter summer months. You may need to brush them more during this time to avoid hairballs. Since their coat was important for surviving harsh winters in Turkey’s mountainous regions, this breed needs cooler climates to be comfortable.

The Turkish Angora is generally healthy, living up to 15 years provided a healthy lifestyle and regular vet visits.

Turkish Angora cats with white fur and blue eyes are prone to deafness. Heterochromatic white Angoras commonly have hearing loss in only one ear. With proper care, a deaf cat can still live a long, healthy life! You should probably keep deaf cats indoors since they can’t properly hear potential dangers like cars, dogs, feral cats, and wild animals.

This breed may also develop hypertrophic cardiomyopathy, the most common form of heart disease in cats. Always adopt your cat from trusted breeders that screen their cats for any health issues. Ask breeders about their cats’ health before adoption and make sure they have health documents for the kittens. 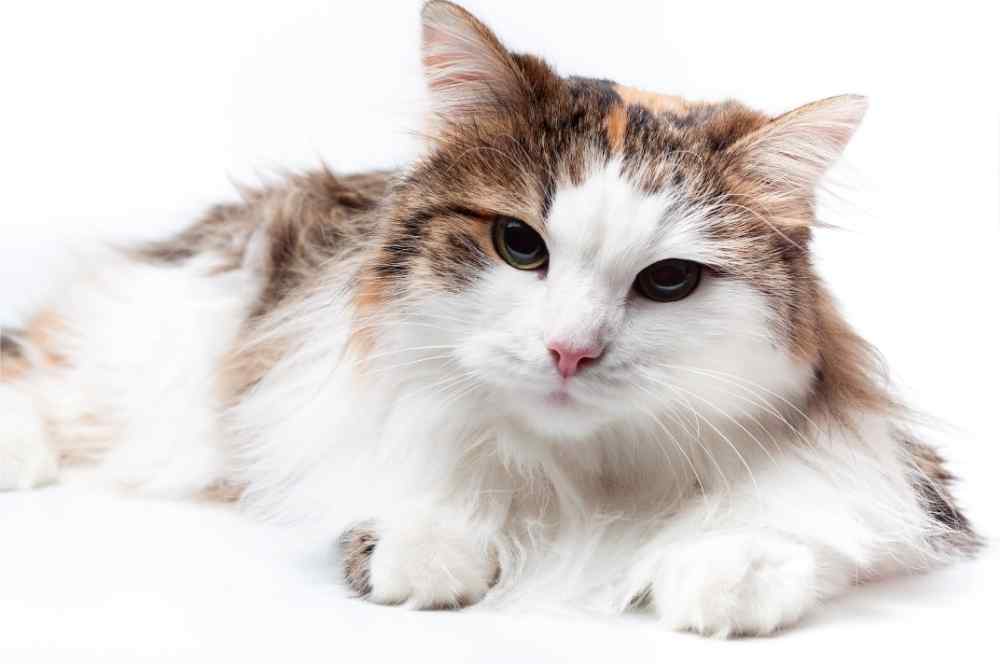 When the Turkish Angora wants food, you’ll know! They are very vocal kitties. But remember never to overfeed your cat, or they can become overweight — or obese!

If you have a particularly whiny Angora, try using an automatic feeder to provide them with portioned-out food throughout the day. It’s also crucial to make sure their diet includes high-quality cat food. Ensure the dry food you give them is high in protein, including natural sources like chicken and salmon. Healthy food should also have taurine, an amino acid that supports the heart and brain health that cats can’t produce on their own.

The food you provide should also be low in carbohydrates. Many carbs are “fillers” since cats don’t require them in their diet. It’s also the lead source of food allergies and obesity in domestic cats. An alternative to dry food is wet food, which has more water content. This can be beneficial to cats that don’t drink enough water.

Angoras get along with everyone in the home, including children. Playful and energetic, they’ll love playing with active kids. Just make sure that younger children don’t pull on their tails or fur, which can be very painful.

Turkish Angoras also enjoy other feline companions, especially if you won’t be home all day. Just make sure to introduce them properly so they won’t fight. If introduced in the right manner, Angoras will get along with dogs as well.

Turkish Angoras are a popular breed because of their luxurious looks and rambunctious personalities. They are often around $600 to $2,000. Of course, this handful of a cat is well worth the price — and then some! Even back in 1890, Angoras were pricey. One Angora owner reportedly turned down an offer of $1,000 at a London cat show. That’s worth about $28,562.42 today!

Turkish Angoras are often called “doglike” because of their sociable nature. Energetic, loyal, vocal, spunky, and sociable, the beautiful Turkish Angora is a glorious pet that’s sure to make your life feel complete — and a little chaotic (in a good way!).