You’ve heard of King of the Jungle. But what about King of the Condo? The Toyger is a chill, loving, and playful domestic cat that looks a bit like a mini tiger. That’s thanks to their one-of-a-kind coat and wildcat-inspired facial features. This breed is relatively new, but they’ve already become highly desirable to cat lovers throughout the world.

While Sugden also went on to breed Bengal cats like her mother, she decided to create her own variation of the breed after being inspired by a tiger-striped tabby she owned that had a peculiar spotted pattern. By having a Bengal named Millwood Rumpled Spotskin mate with a domestic shorthair tabby, named Scrapmetal, Sugden created the Toyger Cat Breed.

Because of their unique and exotic look, other cat breeders joined her efforts in 1993. That same year, the new breed was registered with the International Cat Association. It’s now listed as a championship breed. Judy Sugden then formed the Toyger Cat Society to keep track of the handful of Toyger breeders around the world. Sugden’s reason for creating the Toyger was to stop people from owning wild or hybrid cat species and hoping to stop the extinction of big cats, like the Sumatran Tiger the domestic breed resembles. The International Cat Association is currently the only association to recognize this new breed. 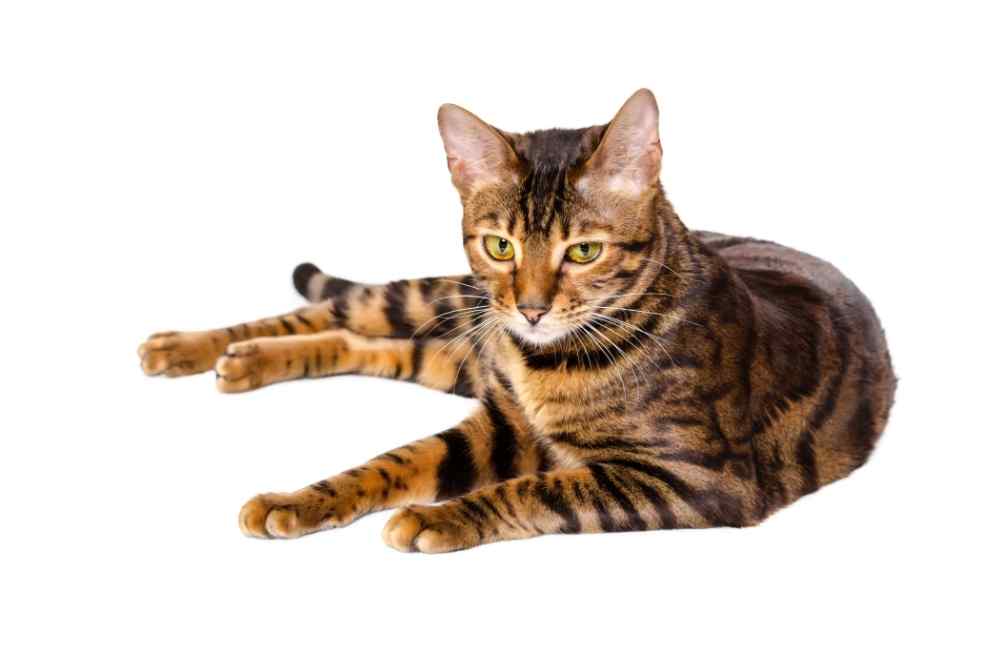 While closely related to the Bengal, Toygers are considered much easier to handle. They still share that energetic streak and you’ll often find them chasing around toys. But unlike the Bengal, Toyger cats are not a big handful who require special supervision and constant attention. In fact, the Toyger is considered pretty easy going!

This friendly breed is also extremely intelligent. You can easily teach a Toyger some tricks. They’ll also enjoy playing fetch with you each day. When you can’t spend time with your Toyger, provide them with puzzle games to keep them occupied.

Toygers are sociable and loving. They enjoy hanging out with their family, whether it’s playing in the same room or snoozing on your lap.

The Toyger is a stunning cat breed that stands out due to its sparkling, bold coat. Its dark stripes contrast with its bright orange coat. When combined with their wild facial features, the Toyger really looks like a mini-tiger. One that likes to cuddle.

The Toyger is considered a medium-sized domestic cat. Male cats weigh between 10 and 15 pounds. Females are slightly smaller, at seven to 10 pounds. They have a long, muscular body and a broad, deep chest. They also have a lengthy, rope-like tail.

With rounded, small ears and rounded eyes, the Toyger has a head reminiscent of a small wild cat. Their muzzle is muscular and well-defined, with a long, muscular, and rounded nose with a strong chin. They look alert and inquisitive, like a little tiger cub.

The Toyger has the same gait like a wild cat thanks to its long body and high shoulders. Their legs are of medium length, with the back the same length as the front. Their paws have long toes and can seem quite large because of their knuckles.

Brown mackerel tabby is the only acceptable color for this cat, with a lot of contrast between their markings. Their coat features dark tabby stripes and rosettes that branch out, as well as more spotted markings on their head.

Their short coat is considered thick, luxurious, “unusually soft” and plush. Owners and breeders note a “dusting” of gold to their coat since it can appear to sparkle in some light. 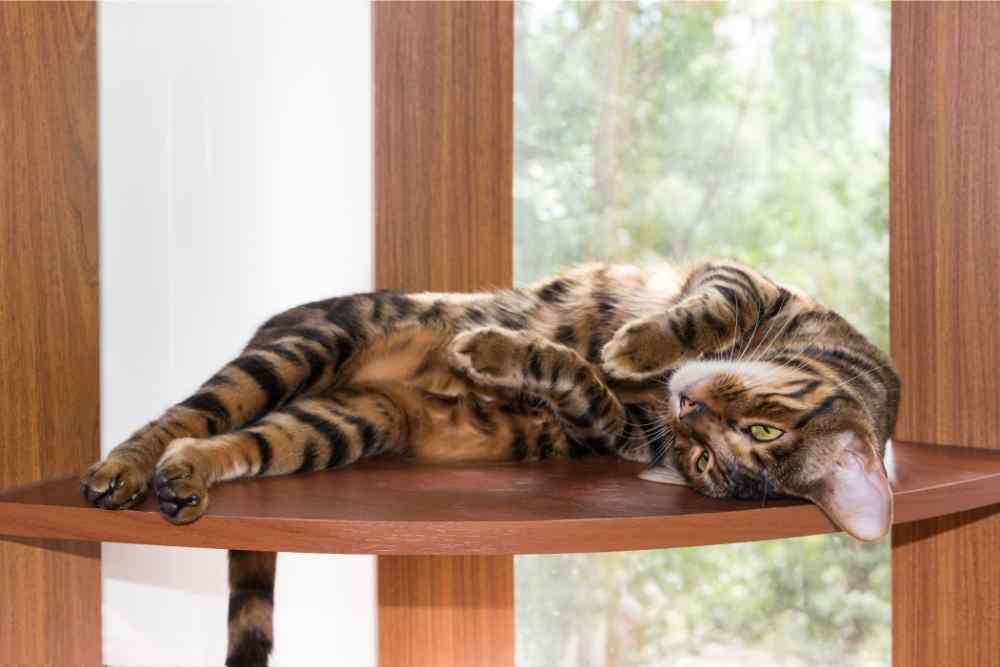 Toygers have a short coat, so they only need to be brushed weekly to avoid excess shedding and hairballs. You can also trim their nails regularly, brush their teeth, and clean their ears to keep them healthy.

The Toyger should be kept indoors at all times if possible. They can be prone to fighting other cats, leaving them with scratches and deadly infections. This will also keep them safe from dogs, coyotes, and cars. This is also a very expensive and rare breed that may be appealing to thieves.

This striped and spotted breed is generally healthy. Just remember to always ask breeders if there’s a health guarantee on their Toyger kittens. You should never adopt a cat without one.

This domestic cat has been known to have heart murmurs, possibly related to hypertrophic cardiomyopathy. Some signs of heart murmurs in felines include loss of appetite and weight loss, breathing problems, pale gums, and being weak and lethargic.

Always take your cat to the vet for regular checkups so the veterinarian can make sure they are healthy and manage diseases and illnesses properly. Toygers that receive the right care will live 12 to 15 years on average.

Like all cat breeds, the Toyger requires quality commercial cat food, either wet or dry, that has a named protein source and taurine. These two ingredients are necessary to keep your cat healthy and active. Avoid corn and wheat (sometimes called “fillers”) whenever possible. Check the label to find out how much you should be feeding your cat daily based on their weight or activity level.

The Toyger is known for being laid back and accepting of other pets in the house. Introduce two cats to each other by keeping them in separate rooms with their own food and litter box at first. Allow them to eat on the opposite side of a door, so they can get used to each others’ scent. When they seem unphased, try letting them play together in the same room — separately at first.

This cat breed is also good with children, but interactions with younger kids should always be supervised to make sure both parties are playing nicely. 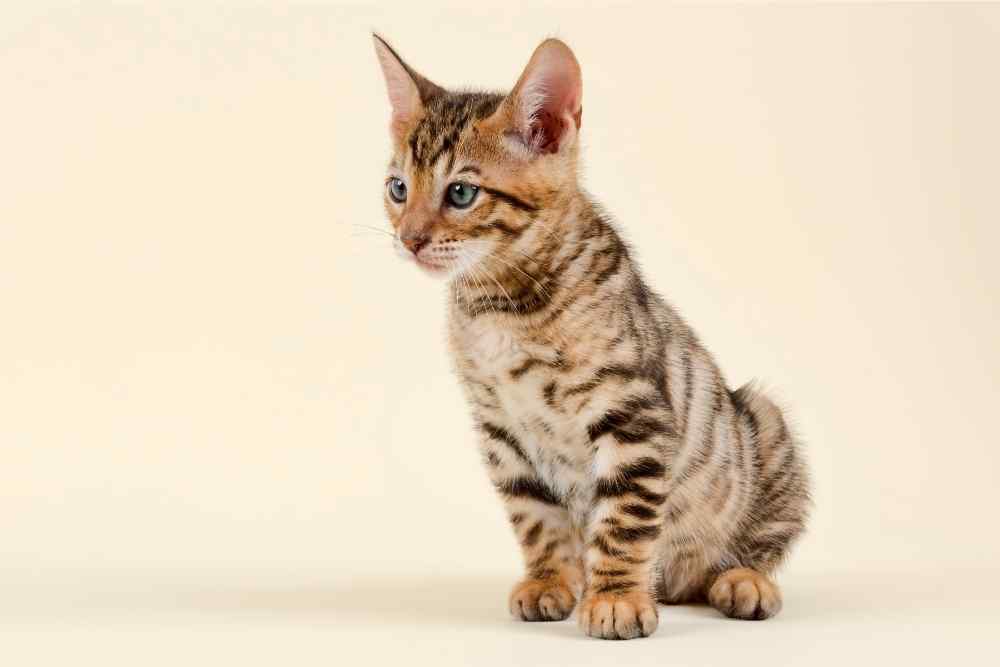 Costing upwards of $2,000, Toygers are one of the most expensive cat breeds in the world. The reason this mini tiger is so expensive is actually not because of its unique look, but because it’s so rare. There are currently only about 20 breeders in the United States and 15 elsewhere in the world.

There are currently breeders in the United States and the United Kingdom that are still working on Toygers. They are looking into how to make them look even more like tigers, by adding more unique facial features and markings. Just imagine having one of these tiny tigers lounging on your bed waiting to snuggle!. Read more information on this link.