The Endocannabinoid System (ECS) functions the same way in people as it does in dogs, cats, and other animals. In reality, all animals have an ECS. This includes horses, rabbits, monkeys, dolphins, elephants, and even sea urchins, to name a few. A huge amount of research is currently being undertaken around the world to find out how exactly the ECS and cannabinoids, like CBD, work together.

The endocannabinoid system in dogs helps to maintain a healthy, natural internal balance. The ECS communicates with cannabinoid receptors using its own endocannabinoids that it produces naturally. However, the ECS can also be stimulated by phytocannabinoids (plant cannabinoids), including Cannabidiol (CBD) – the non-psychoactive compound found in hemp. This interaction between the ECS and phytocannabinoids, like CBD, is causing some big excitement in the medical world today.

You may have read about how people are already using medicinal cannabis and other cannabinoids such as CBD. Some well-educated pet owners are using CBD for their pets, as well. In fact, there are CBD cat treats and CBD dog treats made specifically for pets.

If you have ever wondered how CBD can be effective in so many situations, here is an explanation of how it works with the endocannabinoid system in dogs & cats. Let’s explore how this interaction can have a beneficial impact on many parts of the body.

WHAT IS THE ENDOCANNABINOID SYSTEM?

The Endocannabinoid System, or ECS, was first discovered by scientists who were researching why cannabis causes people to get “high”, hence the name Endocannabinoid System. “Endo” is short for endogenous, which refers to something that originates inside of the body. “Cannabinoid” is a term that describes specific compounds, such as CBD or THC, that are capable of stimulating the ECS.

The ECS is the biological system that is responsible for the effects that cannabis has, both psychological and physical. It has also been discovered that the endocannabinoid system plays a major role in regulating many important bodily functions in dogs.

The endocannabinoid system in dogs has recently become the subject of much scientific research because of the many effects that it has on the body and the therapeutic potential it may hold. Scientists understand the basic functioning of the ECS, but researchers are studying more new exciting therapeutic uses of this system every day. 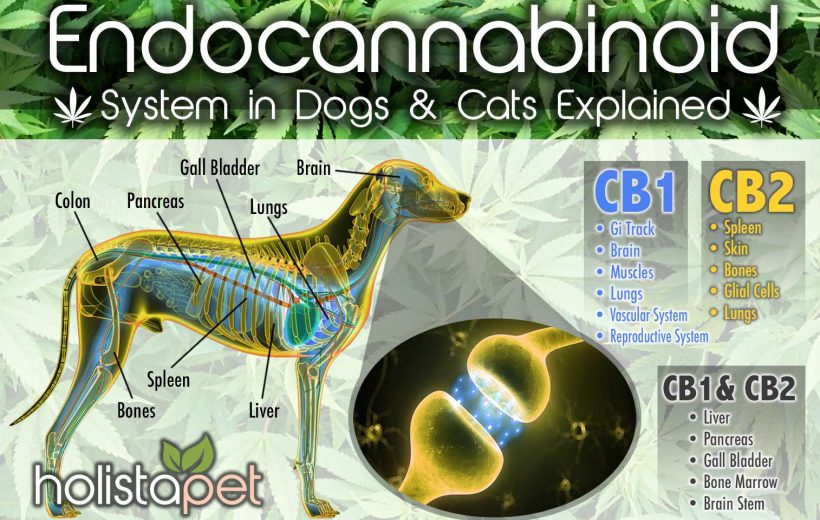 WHAT ARE CANNABINOID RECEPTORS?

Cannabinoid receptors are located on the surface of cells and they monitor the conditions outside of the cell. They transmit what they detect to the inside of the cell, and that triggers the appropriate cellular response.

There are several types of cannabinoid receptors in the endocannabinoid system in dogs and other animals, but the two major ones are known as CB1 and CB2. The precise locations of these receptors in dogs’ bodies are still being investigated, but many locations have already been discovered.

These receptors are involved in a wide variety of body processes, including nerve growth and development, inflammation, immune function, bone growth, pain, emotions (anxiety, feelings of well-being), and metabolism.

CB1 receptors are found throughout the body but are more concentrated in the spinal cord and the brain than anywhere else. CB1 receptors in the brain are found in regions that control specific behaviors.

For example, CB1 receptors have been found in the hypothalamus, which is the part of the brain that is responsible for regulating appetite. There are also CB1 receptors in the amygdala region of the brain; this area relates to emotions and memory. CB1 receptors also reside in the nerve endings which control pain.

The anatomical locations of CB1 receptors in the brains of dogs differ from human brains, which is one of the reasons dogs are much more sensitive to the negative effects of THC than people. CB1 receptors are also found in the skin, salivary glands, digestive system, and immune system of dogs.

CB2 receptors mainly reside in the nervous system, immune system, spleen, and liver. Many of these receptors are concentrated in immune tissues and cells, pointing to the possibility that the ECS plays an immunomodulatory role. This means the ECS may help monitor and regulate the immune responses, such as inflammation or allergies.

HOW DO CANNABINOIDS WORK WITH MY PET’S ENDOCANNABINOID SYSTEM?

THC is the psychoactive cannabinoid that is responsible for the “high” feeling that marijuana users experience. Cannabidiol (CBD) is a non-intoxicating cannabinoid that can provide many benefits of marijuana without mental interference.

When introduced into the body, plant cannabinoids (phytocannabinoids) such as THC and CBD stimulate the cannabinoid receptors in the same way as the body’s own endocannabinoids do. This, in turn, triggers many natural reactions from the ECS. 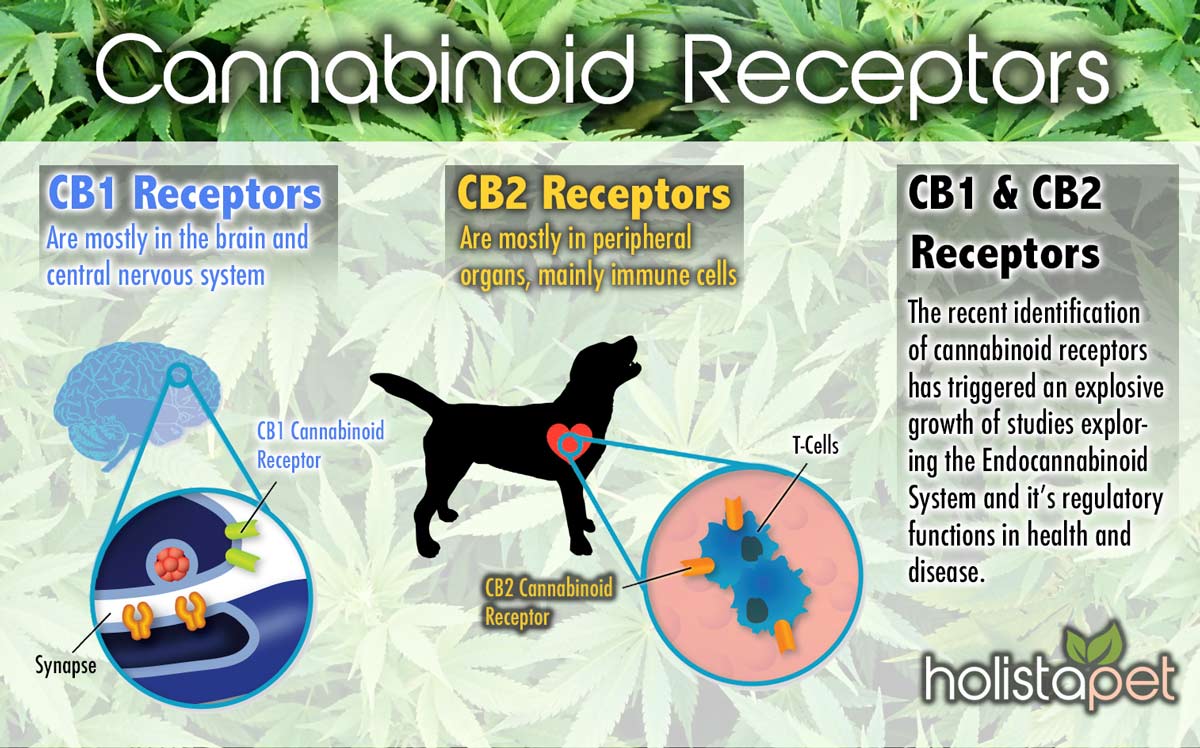 THE FUNCTIONALITY OF THE ENDOCANNABINOID SYSTEM IN DOGS

The full extent of how the Endocannabinoid System works in regulating certain functions of the body is not yet fully understood. Most of the research on the ECS has been done in humans or in laboratory animals.

However, there is a growing and exciting amount of research on the role of the ECS in dogs. Researchers recognize this system for playing an important role in modulating the brain, the immune system, inflammation, the endocrine system, and the musculoskeletal system.

Research suggests that the ECS regulates inflammation. Because of this, the ECS is proving to be a promising therapeutic target in the management of these conditions in dogs.

THE EFFECTS OF CBD & THE ENDOCANNABINOID SYSTEM

The ECS is there to respond to stimulation by the body’s own endocannabinoids, but the cannabinoid receptors can also be stimulated by cannabinoids from external sources, including cannabidiol (CBD).

Initial research on the benefits of medicinal cannabis focused on the psychoactive cannabinoid THC, which binds to the CBD1 receptors to trigger activity.

Research into the effects of CBD is still ongoing, but the list of uses and benefits is continually growing. Some scientists are now even predicting that the use of CBD to stimulate the endocannabinoid system in dogs and in humans could revolutionize modern practices. Learn more here.

Dr. Carine Laporte was born and raised in New York. She graduated cum laude from the University of Pennsylvania with a Bachelor of Arts in Biology. After graduation, Dr. Laporte participated in research at the Hospital at the University of Pennsylvania (HUP) that focused on human cardiothoracic surgery. Dr. Laporte completed her Doctorate of Veterinary Medicine from the University of Pennsylvania School of Veterinary Medicine in 2012. Following veterinary school, Dr. Laporte completed a year-long internship at Texas A&M University, where one of her primary roles was to help teach fourth-year veterinary students in various veterinary specialties, including dermatology. She completed a three-year residency in veterinary dermatology with Dermatology for Animals and became a board-certified veterinary dermatologist in 2017. Dr. Laporte remains dedicated to the combination of teaching, research, and clinical practice in order to advance the profession of veterinary medicine. She was a recipient of the Peter J. Ihrke Resident Research Award during her residency. She has had the opportunity to author and co-author book chapters and several published articles both in the field of human cardiothoracic surgery and in the field of veterinary dermatology and pharmacology. Over the years, Dr. Laporte has had a large family of pets, including two black gerbils, three cats, an Australian Kelpie dog, numerous fish, a parakeet, several pet rats, and two albino African clawed frogs. Her current animal family includes two dogs named Linus and Saian, a cat named Mina, and a tortoise named Shelldon.