Can CBD be useful for aggressive dogs? There has been some controversy surrounding the use of CBD, pets, and its relationship to the psychoactive effects of marijuana. However, quality CBD products do not contain THC, the main chemical that contributes to the “high” effects of marijuana. Therefore, after consultation with a veterinarian, people should feel quite comfortable in giving CBD to most pets to help address behavior problems such as aggression. Let’s learn more about utilizing CBD for dog aggression!

Many dog owners are finding cannabidiol to be an effective, natural tool in addressing a myriad of behavior problems, including aggression and fear. Cannabidiol, also known as CBD, is extracted from the cannabis Sativa plant and continues to grow in popularity amongst pet owners. CBD infused dog treats, CBD oil tinctures, or CBD oil capsules can be administered to dogs and other pets to help treat various conditions related to stress, anxiety, anger, pain, inflammation, allergies, nausea & aging.

What Is Dog Aggression

Aggression is one of the most common behavioral problems in dogs. Aggressive behaviors include harsh barking, growling, snarling, lunging, and biting seen when the dog is saying “back off!” for some reason. Other behaviors, such as stiff body or eye staring, also indicate the dog is worried and may escalate to more dangerous aggression. Although not all aggression is abnormal, anxiety and fear often play a role in this behavior.

Genetics, past experiences with certain types of people, places, or other dogs (especially before 16 weeks of age in dogs), as well as the dog’s current environment have all been shown to be factors in aggression. Regardless of the cause, canine aggression can be very dangerous to families, visitors, or the public if not addressed.

It is important to consult your veterinarian to properly diagnose and treat any underlying health concerns that may be contributing to the aggression, and potentially seek help from a reputable behavioral professional when dealing with canine aggression. 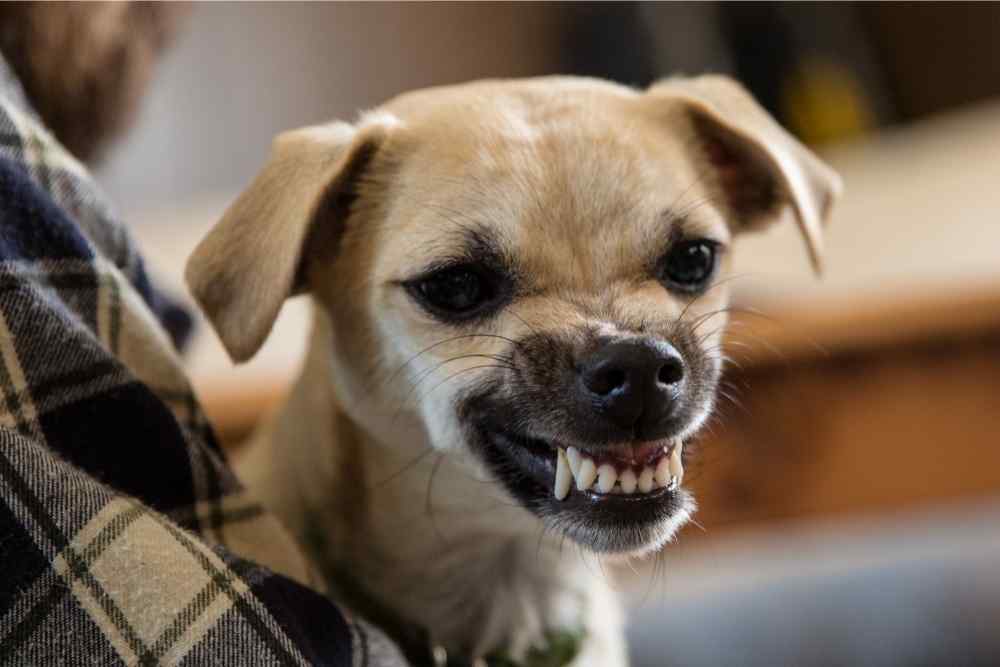 There are various types of dog aggression, and these can be classified according to the target (owner, unfamiliar visitor, child, other dogs, etc.) or motivation for aggression (fear, territorial, possessive, to name a few). A certain dog breed may become aggressive to just one target or in one location, while other dogs may show aggression across multiple contexts. Here are a few of the most common types.

This is probably the most common yet underrecognized type of aggression.  Many things can create fear or a sense of unease in a dog.  Most dogs try to avoid or diffuse the situation with signals like lip-licking or looking away, but any dog is capable of escalating to aggression if he feels threatened enough. People leaning down and reaching out a hand in a friendly greeting can be frightening to a dog.  This is a common trigger for aggression towards an unfamiliar person. Likewise, growls or bites from someone hugging or bothering a dog while she is resting is most often a defensive reaction from the dog.

Pain and irritable aggression are similar to defensive aggression in that the dog is telling the target to back away because of physical discomfort. It is important to remember that any form of discomfort (e.g., dental disease, thyroid disease) or emotional stress (e.g., visitors, new baby) can make the dog feel crankier and lower the threshold for aggression.  We can probably all relate to a bad day at work or school leading to more verbal snaps at family members that evening.

Dogs have a natural tendency to alert or even more aggressively drive away intruders from their territory, an area containing valued resources.  Territorial aggression is by definition directed towards people or dogs that are not part of the group.  Many dogs showing territorial aggression around the house are also wary of people off-property.  Often bites to non-family members in the house or yard are a combination of fear and territorial behavior.

Dogs can show aggression to warn people or other dogs to back away from a specific valued resource like food, a toy, or even a preferred person. Just like territorial aggression, a closer look often reveals attempts by the dog to avoid a confrontation or anxious behaviors prior to the aggression. Food items that are animal-based and can’t be eaten in one bite tend to trigger the worst food-related aggression.  Therefore, a real bone usually triggers more growls and bites than a peanut butter stuffed toy, and growls and snaps around the food bowl are more common than fights over one small treat.

Aggression directed towards another non-family dog often has the same motivations of aggression to unfamiliar people or visitors – fear, defense, and territorial behavior.  Fights between family dogs tend to be triggered by resource guarding and can be particularly scary and upsetting for the family.  Some dogs have a few scuffles early in the relationship, but it is a mistake to assume that just because dogs are generally social, all dogs will get along after they “work it out.”

Not all aggression comes from negative emotions.  Just like kids, dogs can often use rough and tumble play as healthy social interactions.  They can sound ferocious but as long as both dogs are engaging in the play, it is usually fine.  However, some dogs – especially those with underlying anxiety and poor social experiences as puppies – often don’t read other dog’s signals for “that’s enough” very well.  In that case, play can escalate to true aggression and serious injury. It is difficult to teach an adult dog these social skills.

Like play aggression, true predatory aggression is not based on a dog creating distance due to a threat.  A dog in a predatory state is usually quiet, crouching lower to the ground, and maybe raising a paw-like a pointer dog before taking off after a smaller critter.  This could be a bird or squirrel, but unfortunately, a cat and very rarely a small child could be the target.  Chasing moving bikes, cars, skateboarders, or runners may have some foundation in predatory behavior, but that doesn’t mean the dog isn’t experiencing some other negative emotion like fear too.

Treating dog aggression can be complex, but the most important aspect of any aggression treatment plan is safety.  Tools to physically block dogs from the target of aggression – such as baby gates, crates, basket muzzles, head halters, and leashes – are critical in decreasing injury.  Common sense avoidance of dangerous situations is warranted as well.  For example, a dog that is aggressive to other dogs should not be at dog parks or group play with unfamiliar dogs.

Other components of a good plan involve reducing the dog’s fear and anxiety.  Behavior modification should focus on creating alternative behaviors with dog treats.  Instead of rushing the door when a visitor arrives, use positive reinforcement to train the dog to go to crate when the doorbell rings.  Teach your dog to look at you instead of lunging at the end of the leash towards another dog.

It is difficult to learn in a very fearful or anxious state.  Enrichment in the form of exercise, dog treat training, food puzzle toys, and scent games contributes to a better sense of wellbeing.  However, some dogs need additional calming therapies to help reduce reactivity and improve learning.  Prescription medications are available, but some dog owners may wish to use natural alternatives or other home remedies for dogs.

Cannabidiol has been used as a generally safe and natural option to treat canine anxiety and aggression. We, at HolistaPet, assure that all of our products are lab tested for quality and dosing accuracy. CBD is non-psychoactive, which means your pet won’t get “high”. Instead, it promotes feelings of calmness and more relaxation.

Just like most natural products, there can be a point where administering more CBD will have no additional effects on your pet. It’s advisable you give your pet small amounts of CBD tincture first while monitoring the effects prior to increasing the dosage for you pup!

Julia Albright is a Diplomate of the American College of Veterinary Behaviorists and Associate Professor at the University of Tennessee College of Veterinary Medicine. Dr. Albright obtained both a Master’s degree in Experimental Psychology and DVM from The University of Tennessee before completing a residency and fellowship in Animal Behavior at Cornell University CVM. Dr. Albright’s research interests include reducing stress in animal facilities, psychopharmacology, and the human-animal bond.