The Grulla horse is a rarity and is often sought after by horse enthusiasts because of its uniquely colored coats. Like many horses, these beautiful creatures are a sight to see and can be distinguished fairly easily.

Some can be considered a part of the American Quarter horse family. Depending on the breed, they can be great racehorses or workers on the farm. Continue reading for more interesting facts on this horse!

What is a Grulla Horse?

A Grulla or Grullo (grew-yuh or grew-yo) is a member of the dun horse family. “Dun” refers to the dun gene, a dilution gene that affects both red and black pigments in the horses’ coats.

The dun gene is responsible for lightening most of the body while leaving the mane, tail, and primitive markings the shade of the base coat color. Coat color varies depending on the parents. Grulla horses are rare and make up less than 1% of registered American Quarter horses.

Grulla horses are beautiful and unique, and a few characteristics must be present to be considered a part of the Grulla horse family. Remember that Grulla horses are not a breed; the term Grulla refers specifically to their primitive markings. Keep reading to learn more about the unique features of a Grulla horse! 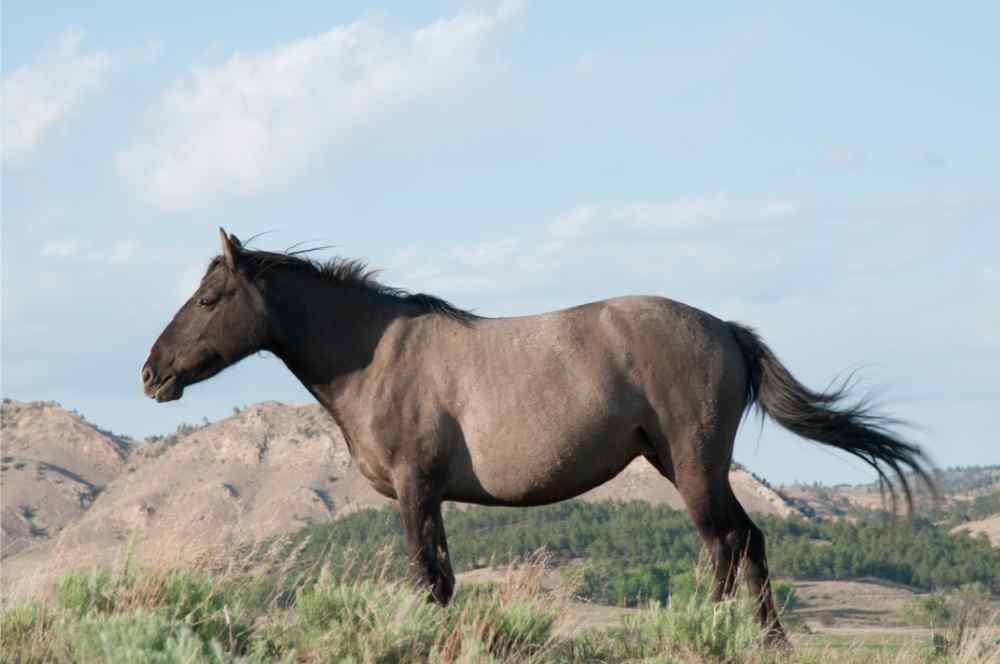 Where Does the Word Grulla Come From?

The word “Grulla” is a Spanish word for a crane. Cranes are often slate-gray in color. The most distinct characteristic of a Grulla is its gray coat. Due to the origin of the name, some people refer to a mare as a Grulla and a stallion as a Grullo.

A Grulla horse is determined to be a part of the Grulla group based on its coat color and markings. An interesting fact about the term “Grullo” is that it is the name of a town and municipality in Jalisco, in central-Western Mexico. This town is called El Grullo. It is named after these beautiful horses’ color!

A Grulla horse is known for its distinct coat color and primitive markings. Because they are considered a part of the dun horse group, they are usually characterized by tan-gray or mouse-colored hairs on the body.

Often, they have shoulder and dorsal stripes and black barring on the lower legs. Dorsal stripes run along a horse’s back, and barring refers to stripes of color.

A Grulla horse can come in various colors narrowed down to a few categories:

Grulla horses have dark-tipped ears, a large head relative to the rest of their body, and dark legs (usually black or brown). These characteristics need to be present for a horse to be considered a part of the Grulla group.

The average height of a horse is around five feet. Any horse measuring more than 57 inches is considered a horse, and anything less is classified as a pony or miniature horse. A Grulla horse can come in any shape or size so long as they meet the coat criteria.

A few additional characteristics a Grulla horse may have are:

Shades of Grulla can vary. Usually, they are gray, cream, or black. A foal can often be called Grulla, only to shed off black after the first four months.

Typically, Grulla foals are born a light tan color with a distinct dorsal stripe. Telling the difference between a Grulla foal and a dun foal is easy! A Grulla foal has black hair around the eyes and a black or gray mask of hair across its nose’s bridge. A dun foal has golden, orange, or brown hair in those two places.

Grulla is a black-based color which means that the horse’s features, such as its mane and tail, are black. Basic mane care remains the same no matter what kind of horse it is.

Here are a few tips to keep a horse’s mane healthy:

What Colors Make a Grulla Horse?

Horses start with a primary color of either red, bay, or black. Two genes control these base colors. One allows the color to express in its coat, while the other directs the black pigment to locations.

Grulla horses are beautiful, majestic creatures that are appreciated for their unique markings and black points. Though rare, the Grulla coat is an aesthetic feature and serves no other purpose for the horse. These horses can still be trained to be racetrack horses or farmhands.

Many breeds can be considered Grulla, and each horse serves a different purpose. Some are more well suited for racing, while others can be better for farm work.

The marking on each horse varies in visibility, but you can usually see the crisp stripe running down the center of its back. Dun is created by a dilution gene that causes a base coat to lighten without changing the primitive markings and points.

How Rare is a Grulla Horse?

Grulla horses are extremely rare and make up less than 1% of registered American Quarter horses. If you want to get a Grulla, buying or breeding one are your best two options!

If you want to buy a Grulla horse, seek out a reputable breeder who specializes in Grulla horses. Often, non-Grulla specialists think they have a Grulla only to end up with a dun in either gray or black.

The other way would be to try and breed Grulla. There are very few guarantees should you decide to take this route. The best bet is to breed two Grulla horses. According to some studies, the likelihood of getting a Grulla foal from two Grulla parents has averaged less than 50%.

The genetic makeup of a Grulla horse starts with a few dominant genes. The expressed allele is dominant and it visibly affects the coat. Unexpressed alleles are recessive and do not affect the coat. It can also be an “invisible gene.” 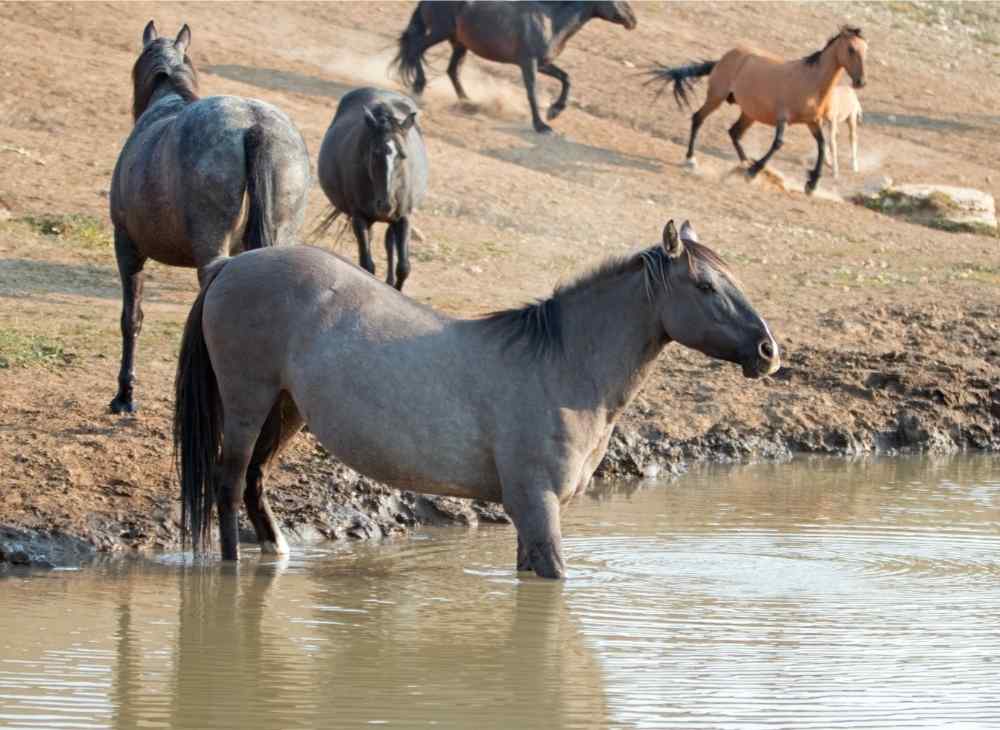 What Horse Breeds Can Be Grulla?

Many horse breeds can be Grullas. Because Grulla horses are categorized based on coat color and markings, it is not specific to any particular breed.

Here is a list of some of the most popular horse breeds that can have the Grulla coat color:

Grulla horses are extremely rare, and there are few guarantees that breeding can offer. Knowledgeable breeders are the best way to get your hands on these beautiful horses. Like all horses, they require coat, hoof, and mane care. To be a “Grulla,” there are certain criteria a horse must meet.

The most popular breed in the U.S. today is the American Quarter Horse. The American Quarter Horse Association is the largest breed registry in the world. These horses can have Grulla coats, therefore sub categorizing them into the Grulla group. Because Grullas are not a single breed, many equines have a Grulla coat. These can include ponies and miniature horses. These amazing creatures are a sight to see when roaming around an open space!

Jovanna Madrigal is a multimedia writer who is mildly allergic to everything. She hates ketchup on her burgers and asks for everything on the side. Due to working retail for several years, phrases such as "excuse me," "do you work here," and "I need help" may cause PTSD and adverse reactions, similar to heart medication. When she's not busy dissecting every part of her life, right down to her food, she likes to spend time with her freckled dog Oliver.