The Mustang is an iconic American horse breed that is synonymous with one word: freedom. These powerful horses have had a rich history, with multiple breeds contributing to their heritage. Riding the Mustang horse makes you feel like you’re a cowpoke exploring the new frontier.

This breed’s name went to a muscle car that’s just as American as the horses, and by the end of this article, we’re sure you’ll see why. Embodying not only strength and stamina but the American spirit itself, let’s get to know the legendary Mustang horse!

The American Mustang is a picturesque horse with perfect proportions. They have wide-set, intelligent eyes and bald face markings. Face markings are patches of facial hair that don’t match the rest of the horse’s coat. “Bald” markings stretch between the horse’s eyes and cover the length of its face.

These animals have long life spans, and many live to 40 years of age. They are sometimes called American Mustangs to differentiate from the Spanish horses (Iberians) that they descended from.

Today, most equestrians use the terms Mustang and American Mustang interchangeably. The name comes from mestengo, which is a Spanish word for “untamed beast.”

Some use the name “Spanish Mustang,” but this can be a confusing classification. While Mustangs did come from Spanish horses, the name Spanish Mustang is more closely associated with the Colonial Spanish horse (we’ll examine this difference further on).

Mustangs are surefooted, which added to their value on the plains of the Old West. After decades of roaming the Sierra Nevada and Rocky Mountains, their long, sturdy legs became adept at moving across harsh land. Mustangs have light leg feathering, which means they can grow longer hair on their lower legs.

Mustang horses are small to medium-sized. Both stallions and mares typically reach 13-15 hands (52-60 inches). Ponies are 14.2 hands or shorter, but since the Mustang often reaches 15 hands, it is not considered a pony. Adult American Mustang horses weigh around 800 pounds, which is relatively light for equines.

Mustangs are wild horses, and even after domestication, they can retain a fiery personality. Their personality can range from submissive to aggressive based on the training they receive before adoption. In the wild, Mustangs are free-roaming horses, so you may have to work on their control.

Due to this range in personality, you’ll want to get as much information about a Mustang’s background and upbringing before buying it. If you’re a beginner equestrian, a Mustang that has not been broken (tamed for riding) is not the best choice. Once an expert has tamed it, the Mustang is a suitable beginner horse.

The Mustang’s ancestors were first brought to the Americas over 500 years ago. Christopher Columbus imported Spanish horses to the New World, and breeding quickly began. The Native Americans put these horses to great use, and they were soon traded across the country.

As these early Iberian horses grew in popularity, it became harder to control their numbers. Many domesticated horses escaped during battles, transport, and trading. The escapees banded together, forming herds.

The wild Mustang was born from these untamed herds. The transition from Iberian horse to Mustang took place gradually over the 16th century. By the early 17th century, many Iberian horses had transformed into Mustangs as we now know them.

The Mustang’s original wild roots have certainly made it deserving of the Spanish word mestengo. Since Mustangs diverged from domestic horses beginning in the 16th century, there is some debate about whether they are feral or wild.

“Feral” describes non-native horses that became undomesticated. “Wild” refers to animals that are native to the land but were not previously domesticated. The U.S. Bureau of Land Management (BLM) classifies Mustangs as feral horses.

The BLM decided Mustangs were feral because they are the descendants of once-domesticated horses brought to the West. However, many equestrians disagree with this label and claim that since their arrival in North America, Mustangs have become domestic horses.

There are still thousands of wild Mustangs roaming the Western United States, but not nearly as many as there once were.

Unfortunately, the wild Mustang population grew too large by the 1800s. People of western states couldn’t support the horses, so they killed Mustangs to reduce their population. In 1971, the BLM passed the Wild Free-Roaming Horses and Burros Act to protect North American Mustangs.

How to Care for a Mustang Horse

The care that a Mustang requires may vary slightly based on whether it’s a domestic or wild horse. Adopted wild horses take longer to train, though they will still show impressive adaptability. Besides training, Mustangs require the same nutrition, wide-open spaces, and grooming as most horse breeds.

Being wild horses, Mustangs are excellent at adapting to new situations. Many equestrians describe adopted Mustangs as “predictably unpredictable,” meaning you can expect them to behave erratically from time to time. But, these horses form strong bonds with their trainers.

Just because a wild horse is placed on an enclosed pasture, it may not lose its wild nature. Unless you are a seasoned equestrian, we recommend investing in a horse trainer. Adult Mustangs may be small, but they’re powerful enough to cause injury if they get rowdy. Not all Mustangs are fit for a life on the range, and a professional trainer can help you tame these unpredictable beauties.

Do you know what else can make training easier? CBD oil for horses! Cannabidiol (CBD) is a natural compound that comes from hemp, and many equestrians use it for its calming properties. It can relax hyperactive, overexcited, or frightened horses. This makes your horse more receptive to your presence and commands.

CBD pellets for horses are another excellent way to add CBD to your steed’s daily routine. The feed is formulated with beneficial omega fatty acids and proteins to keep your horse in tip-top shape.

Nutrition and Feeding for a Mustang Horse

According to the Bureau of Land Management, which oversees Mustangs’ care and protection, you should feed your horse 2% of its body weight per day. The best food for these wild animals is grass and brush, which is what Mustangs have munched on since their ancestors came to North America 500 years ago.

If you don’t live near a good source of grass or brush, hay is another nutritious option. Modern horses are not as hardy as the Mustang, so they require pasture that is rich in nutrients. This means that pasture meant for most breeds may be too lush for a Mustang, resulting in obesity. 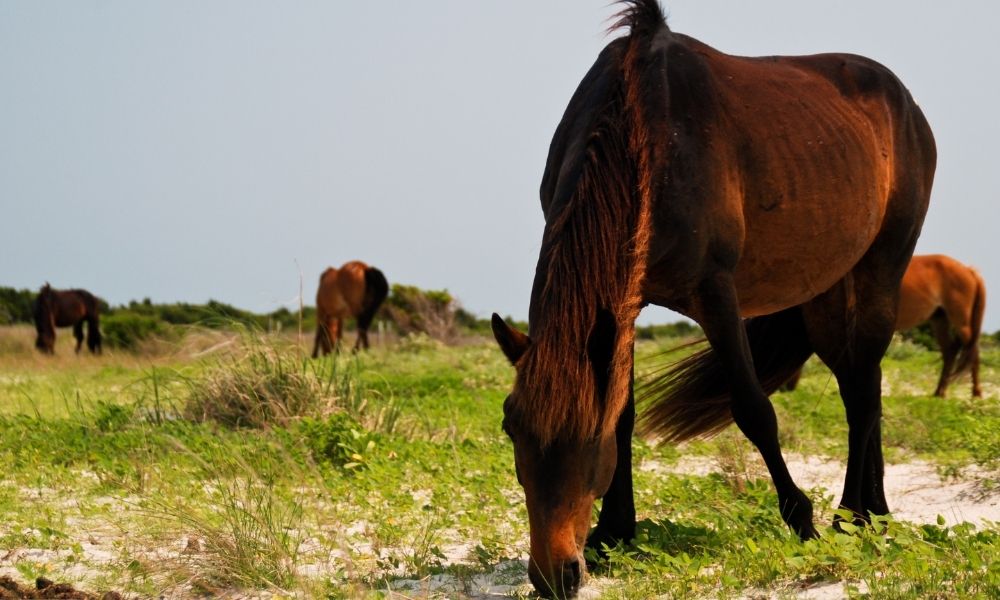 The population of Mustangs across the Western United States was once over a million strong, which resulted in a diverse gene pool. Their population may not be back up to a million (the BLM estimates there are 25,000 left in the wild), but Mustangs are still a varied breed that comes in every coat color.

Since these animals are used to the harsh environment of the wild, they do not have specific grooming needs. Though, if your Mustang has feathering on its legs, make sure the hair is completely dry after a bath or hose-down. Moisture trapped in a horse’s leg hair can lead to infection and discomfort.

Hose your Mustang down after training to wash the sweat off of its body. Groom them three times a week using a curry comb, stiff brush, body brush, and a washcloth. To groom your horse, follow these steps:

Mustangs are resilient and healthy horses, but no animal is invincible. In the wild, Mustang herds protect injured horses while they heal. Fortunately, we can take preventative steps to increase the chance that domestic horses won’t suffer from a disease or injury. The primary health concern for Mustangs is laminitis.

Laminitis, also called founder, refers to inflammation in the laminae, which is tissue within the hoof wall. It is often caused by obesity, so make sure you’re horse stays at a weight that is optimal for its size. Laminitis symptoms include limping, reduced mobility, lameness, and heat coming from one or more of its hooves.

As we mentioned earlier, Mustangs are used to receiving fewer nutrients than the average horse. Current agricultural practices allowed horse and cattle owners to turn their pastures into nutrient-dense feeding grounds. This is wonderful for an animal raised on a grass diet, but not for Mustangs.

Mustangs don’t need fewer calories than other horses. They just aren’t used to the concentration of nutrients in each bite of roughage. If a Mustang eats the same amount of pasture as it does in the wild, it will receive more nutrients than its body needs.

How to get a Mustang Horse

Ready to buy? Between the Mustang horse and car, we’d advise going with the horse. They’re cheaper, quieter, and run on plant-based fuel (a.k.a. hay). You can purchase Mustangs from other equestrians on online auction sites like EquineNow.

Since Mustangs can be highly trained or buck-wild, you can find horses for as little as $100 or as expensive as $45,000. The average price is around $2,000. Adoption is another way to get your hands on a Mustang horse.

Thanks to the Wild Free-Roaming Horse and Burro Act, the Bureau of Land Management (BLM) monitors protected land known as Herd Management Areas. Mustangs are allowed to roam free on these lands, though you can also submit an application to the BLM to adopt one (the base fee is $125).

Today, these animals are making a comeback. The Extreme Mustang Makeover is a program that celebrates the athleticism of Mustangs while also promoting the breed. Consider entering your steed in one of their events!

The American Mustang is one of the most versatile horses in the country. The BLM may consider Mustangs non-native, but the fact that equestrians find the classification controversial shows how intertwined this Spanish breed has become with the United States. Only the Morgan horse can compete with the Mustang’s uniquely American heritage. Fortunately, with efforts like the Extreme Mustang Makeover program and the Wild-Free Roaming Horses and Burros Act, Mustangs will continue to thrive!

William Barrios is a writer with experience in marketing, social media strategy, SEO, and creative content. He has written for comedy, health, wellness, pet care, and entertainment. In his free time, William enjoys road trips, games he can win, and Raising Cane’s chicken.