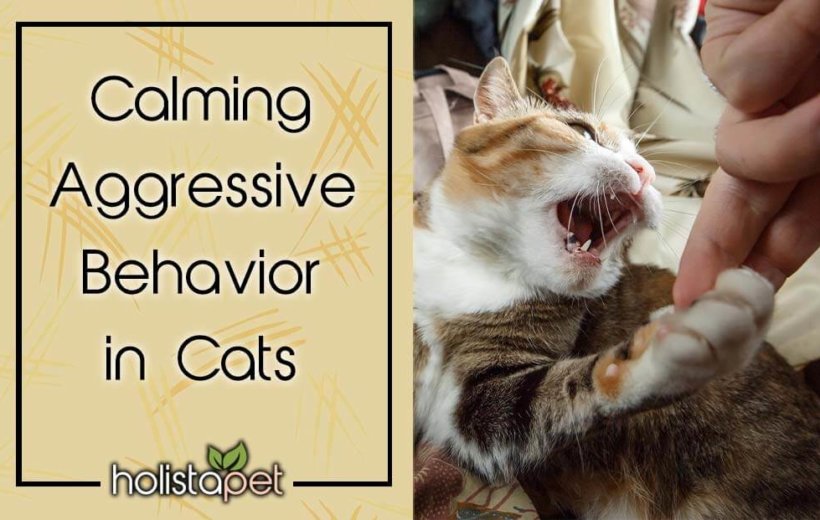 Aggression is incredibly common when it comes to how cats behave. Animal behaviorists too often see overly aggressive cats. Cat aggression is hardly acknowledged as severe as dog aggression. This could be due to the fact that cats are smaller and rarely ever chase people to bite them. Some cats are more prone to aggression than others but basically any breed can develop this behavior. The good news is there are many ways to calm an aggressive cat naturally like catnip, valerian, or CBD to name a few. But, before we get to the remedies let’s look at the root of the problem to understand how this behavior develops.

What is Aggressive Cat Behavior?

As lovely as they are, cats can cause scratch fever, which is usually harmless but might result in a serious infectious disease. Although fights with cats are rarely ever fatal, their aggression shouldn’t be ignored. It can be very risky to live with an aggressive cat, especially with children around.

Keeping size in mind, pound for pound, aggressive cats probably cause more damage than aggressive dogs. Cats will use their teeth or and all four paws with claws to attack, compared to dogs who only use their mouth. A cat’s canine teeth are much sharper than dogs and they protrude more. Cats tend to bite or inflict lacerations, which can be very painful. Untreated cat-inflicted wounds can quickly become infected, causing what’s known as cat-scratch disease.

Aggressive cat behavior can manifest as a threatening behavior directed at a cat, person or other animals. Most wild animals display aggression to ensure another animal doesn’t cross over to their territory, doesn’t harm their offspring, and to protect themselves. Cat hostility can occur at various times for many different reasons. For pet cats, aggression can range from a cat who hisses and avoids to a cat who continually launches attacks. 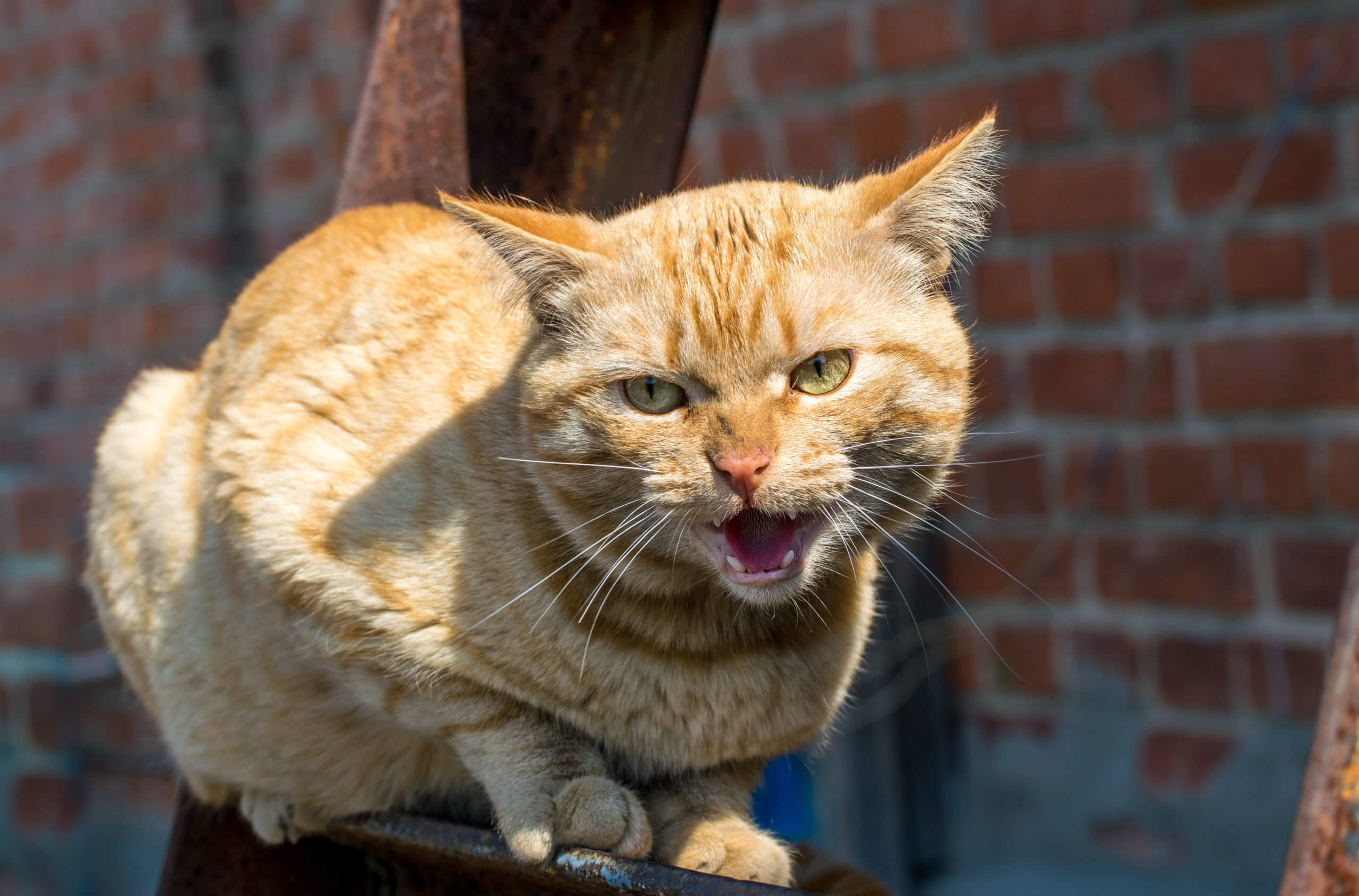 What Causes Aggression in Cats?

Several factors cause aggression in cats. Understanding what upsets them and what they are trying to communicate can be very beneficial when attempting to calm an aggressive cat.

Noticing their body language helps cat owners understand the motivation behind their behavior. It can also help them respond in more effective ways, versus being caught off guard and unknowingly promoting their aggression even more. Several things can trigger aggression in a cat, such as:

A cat who believes they cannot escape a threat is likely to become aggressive as a self-defense mechanism.

Redirected or sudden aggression is incredibly dangerous since you hardly ever see it coming. In cases like this, a cat will become hyper-aroused by some external source like an animal they see outside but can’t chase because they are indoors. Odd smells and frightening noises can also trigger them to redirect their anger on whoever is closest.

Pain has often been the culprit of cat aggression, as they find themselves agitated in failed attempts to relieve their discomfort. Arthritis, trauma, infections, dental diseases, and wounds are just a few reasons for your cat’s pain and aggression.

Many things can cause stress in felines such as cat anxiety, fear, or abuse for example. Like humans, cats can lash out with aggression from too much stress. Stress can also be a symptom of an underlying health condition. This is why it is a good idea to get your cat checked out if it is showing signs of stress or aggression.

What are the Aggressive Cat Breeds?

According to the ASPCA, aggression in cats is one of the most common issues in domesticated felines. Feline aggression can stem from underlying medical problems. However, sometimes it just depends on the cat breed and its genetic behavioral patterns. Some of the more aggressive cat breeds are: 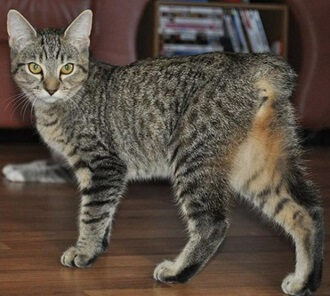 This breed is one of the oldest cat breeds we know of. They are known for their bobtails, although some might not have any tail. Manx cats are usually playful and incredibly smart. However, they are very wary of new people and can become instantly aggressive if they feel their beloved owner is in some sort of danger.

Because of their exotic appearance, these cats have become increasingly popular. Not only do they look a lot like wild cats, but they can also act like them. Bengal cats need loads of social interaction and attention. Without enough playtime, they can become very aggressive.

Known as the hairless cat, the Sphynx cat is another intelligent and playful breed. However, they tend to be incredibly demanding of their owners. If they feel neglected, they will demand it through aggressive behavior. 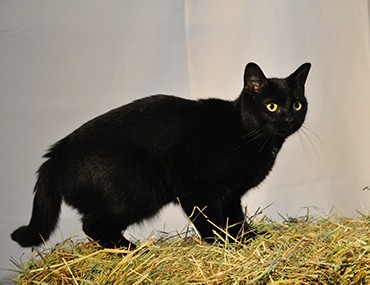 Bombay cats are quiet, independent, and regal as their appearance mimics that of a panther. They hate loud noises and sudden movements, which in turn causes them to be aggressive.

Siamese cats are very lovable as they tend to bond quickly with their owner. What makes them so loyal also makes them aggressive toward strangers.

Although Singapura cats are smaller than other cats, they are quick, extroverted and very energetic. Their sporadic behavior can cause them to be overly-cautious, rarely trusting new people and situations. If they feel they are in danger, they will become aggressive. 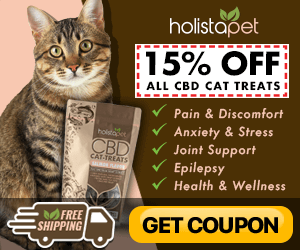 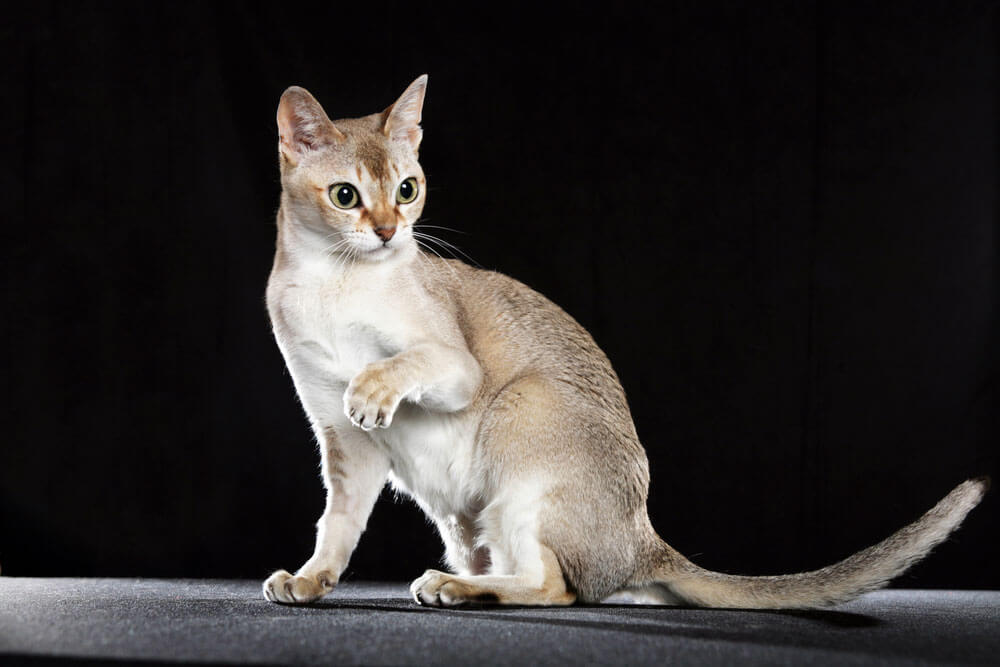 How to Calm an Aggressive Cat

If you want to calm your aggressive cat, it’s probably best to first consult with your vet about it. This way they will check for any underlying health issues that you might not be able to spot on your own. If your cat is healthy, looking into natural ways to calm an aggressive cat is an excellent second step. There are a few home remedies and natural approaches to help calm a cat’s vicious behavior.

If you notice your cat resorting to aggressive behavior, remember, early intervention is best. Allowing the behavior to develop and advance could be dangerous for your cat and anyone around it. Under no circumstances should you punish your cat, physical punishment or even verbal may result in more aggression from the cat. If your cat begins to show signs of aggression here are some remedies that may help: 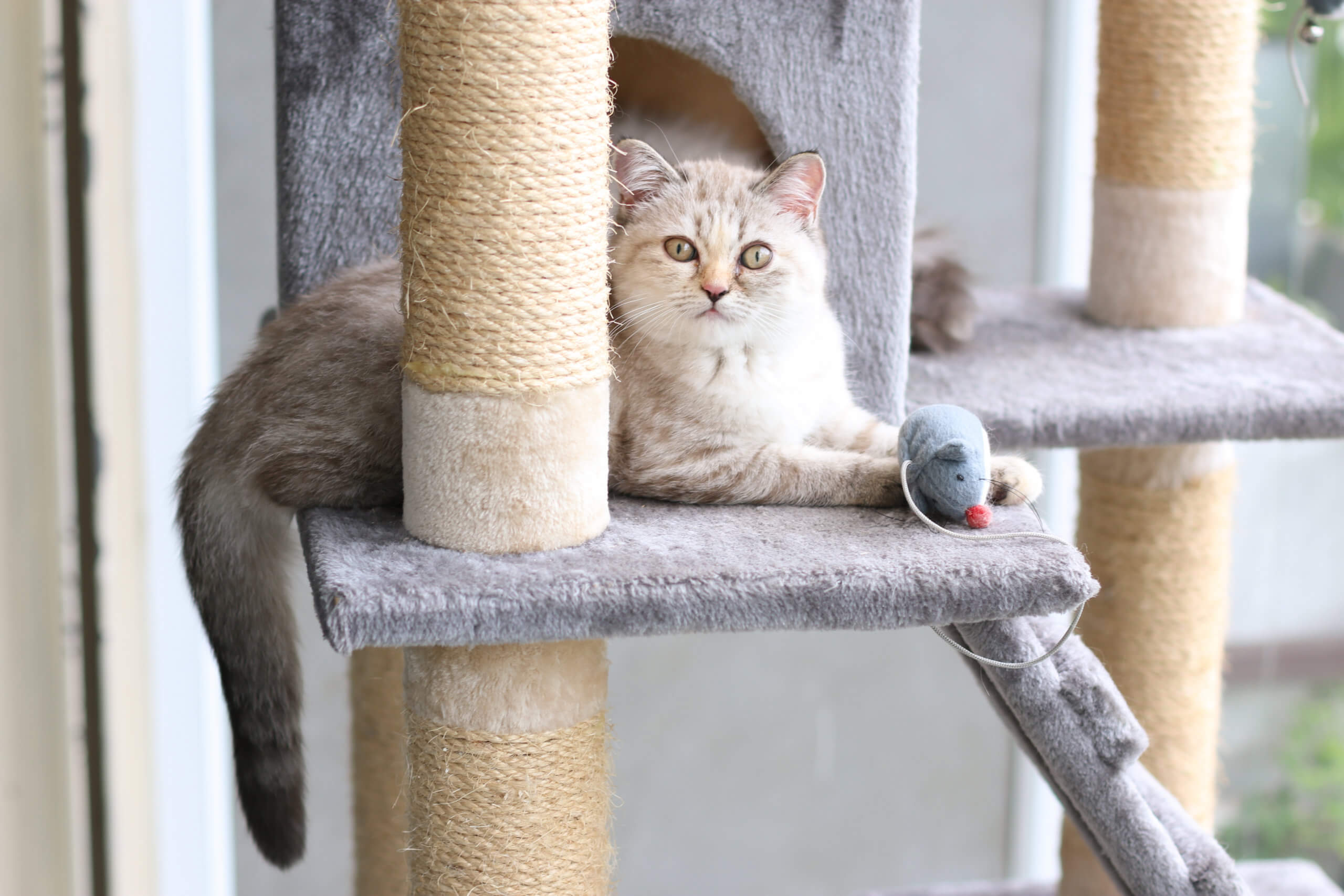 Many times, aggression in cats is associated with built-up energy. Offering extra stimulation during times before they become aggressive can help a cat change their behavior over time. Providing ways for a cat to exert its energy will help decrease aggressive behavior from building up. By using this method you can calm aggressive cat behavior before it arises.

Being alert and noticing their patterns of aggression can help you know when to stimulate your cat. Ways to excite them include extra playtime, cat trees or condos, and climbing perches. Giving them cat treats during stressful times can help them associate those moments with a reward, helping them change their behavior.

CBD has more than 113 natural cannabinoids that interact with the endocannabinoid system (ECS) in both people and animals–including cats. The ECS supports homeostasis, which naturally maintains a calming balance in overall health when dealing with internal and external conditions. Cat owners use CBD because of its naturally soothing and relaxing effects. 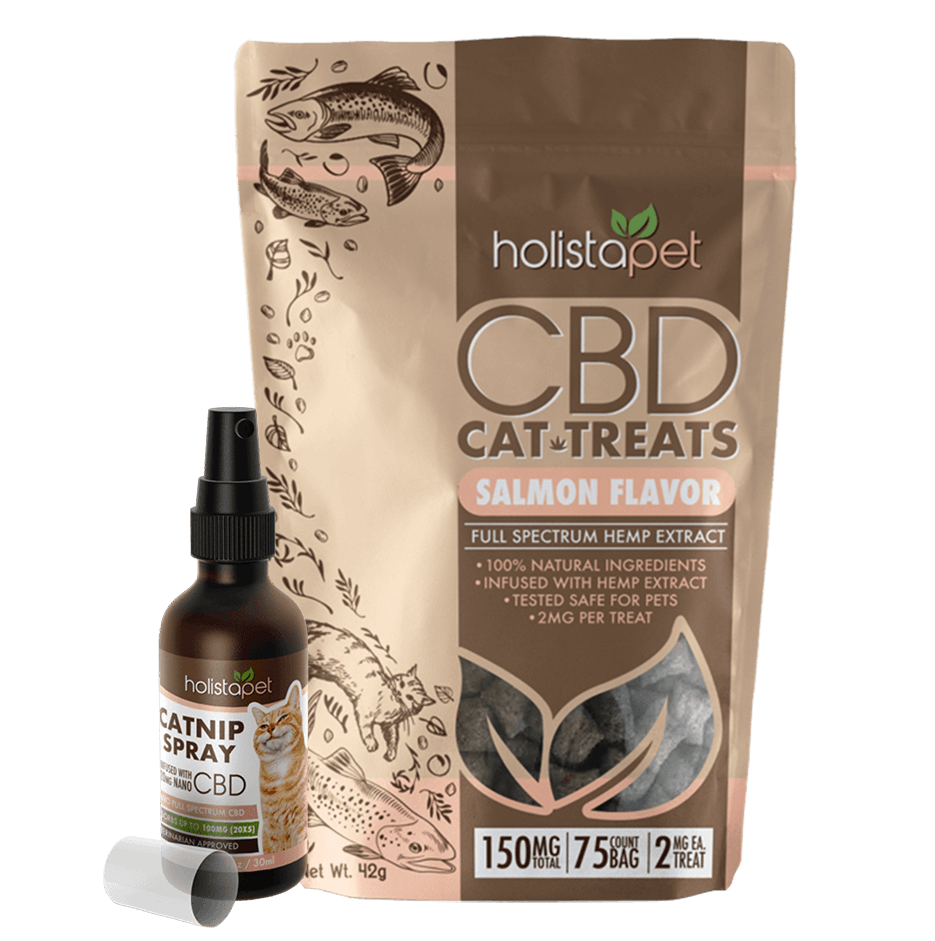 You can choose from CBD oil, CBD catnip or CBD cat treats, depending on what you think your cat would prefer. All of which will promote soothing and calming effects, helping reduce any aggression in your cat. When introducing a cat to any CBD product, just remember to follow the dosing recommendations listed on the package.

Although it might seem redundant to give a cat an herb that might excite them, catnip can be useful when trying to calm an aggressive cat. If you believe your cat is becoming anxious, try giving them some catnip. It will get them excited enough to tire them out, which can help if their aggression stems from built-up energy.

Catnip infused with CBD, like Holistapet’s catnip spray, may provide even better results. Together CBD and catnip combine to promote positive stimulation for the mind and relaxation to calm the body.

Valerian root has been used countless times throughout history to treat stress, insomnia, nervousness and headaches. Although there is little research that connects stress or anxiety with this natural herb, it hasn’t stopped modern day users from sharing their positive experiences.

Similarly, cats tend to love it as it also mimics catnip. The herb is known to naturally trigger an increase of gamma-aminobutyric acid found in the brain. This acid produces a relaxing effect, causing cats to nap or rest peacefully.

Chamomile is used by several people in their efforts to relax. Not surprisingly, it has the same calming effect on cats and dogs. However, please don’t give your cat chamomile tea. Instead, try scattering dried chamomile around their lounge and play areas.

If your mind went straight to beer after reading ‘hops’, you’re not far off. As one of the main ingredients in beer, the hop plant is known to promote calmness. Just like chamomile, don’t go giving your cat any beer. Instead, leave dried hop flowers next to your cat’s favorite play places and lounging areas.

If you go to any pet store you’re likely to find several products marketed to target anxiety or aggressive behaviors in cats. Many of the sprays and diffusers release pheromone-like properties that cats are fond of. Although it’s the least “natural” approach, cats will often become less aggressive and anxious when they’re used correctly.

Take Them to A Behaviorist

If all else fails, and you’ve already got your cat’s health checked out, you might want to try seeing an animal behaviorist. These trained professionals can help determine aggression triggers and can give you specific steps to take at home to resolve the problem effectively.

Cat aggression should never be taken lightly. Left unmanaged, as it can escalate and cause a cat to inflict harm on anyone nearby. Although not common, cat scratches can lead to serious infection. So, whichever route you choose, just make sure you remain proactive and always monitor your cat closely. Read more!.

Fear and anxiety in cats are quite common problems. A range of factors can contribute,…