Hissing. Sniffing. Swatting. Hiding. This is all just part of introducing cats. It’s a stressful process for everyone involved, but with the right preparedness and procedure, your cats will be hanging out on the couch together in no time. Who knows? They may even like each other!

A lot of people wonder how to introduce cats — they’re particular creatures after all. So, let’s take a closer look at why cats act the way they do when a new kitty is introduced and what you can do to make your current cat and new cat get used to each other in the safest and most effective way possible.

Do Cats Naturally Get Along?

Every cat has its own unique personality, including how they deal with social interactions. Some cats are happiest when they have a fellow feline companion, while some prefer to have you all to themselves.

The reason that cats have a tougher time meeting new pets in general compared to a dog is that they are extremely territorial animals. Picture a big cat out in the wild. Almost all of them are loners, ruling over a territory they’ve claimed. They hunt, sleep, and even guard their territory alone.

Cats were domesticated by choice when they noticed a lot of small rodents around human settlements. This ended the cat’s traditional solitude but didn’t quite rid them of their territorial nature. When you adopt a cat, you and your home become their territory. That’s why many cats become aggressive or threatened when a new cat is plopped into the territory they once ruled over without interruption. 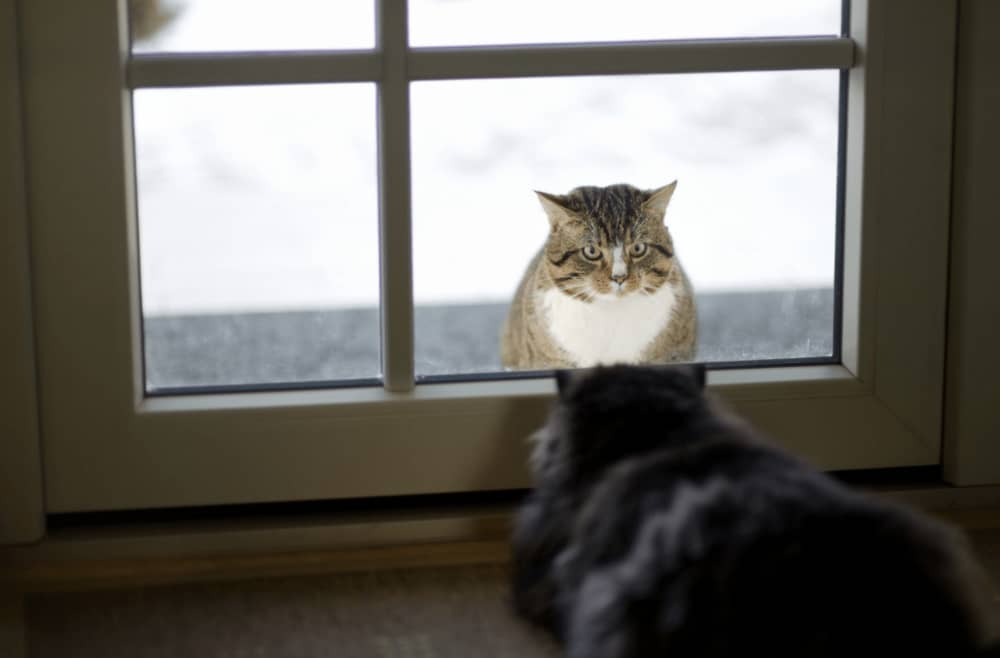 Do Male and Female Cats Get Along?

Assuming all cats in this scenario are properly neutered and spayed, male and female cats can be introduced in the same household without the gender playing too much of a role in their friendliness towards each other. But cat experts have noticed some patterns in cat behavior that may help when considering the gender of your new cat.

Research out of Switzerland found that cats will often be more compatible with a cat of the opposite sex. When it came to same-sex introductions, males were more likely to get along than two female felines. That’s because female cats have been known to be a bit more assertive and aggressive than their male counterparts. While all cats are individuals, many owners and cat rescue workers have noticed that female cats can be a bit bossier, whether it’s demanding attention or ruling over their domain.

How to Introduce Cats to Each Other

There are a lot of factors to consider before adopting a new cat and introducing them to your current kitty. If you’re unsure how your cat will react, it’s often safer to adopt a kitten or younger cat. This will make the new arrival less of a threat to your existing pet, although some proper introduction steps should still be taken to ensure safety and the least stress possible.

Before you bring your new cat home, make sure you have a room set aside for them that can’t be accessed by your current cat. This room should not be your cat’s favorite space, since they should have this area themselves to make them more secure.

Inside the separate room, have an area where the new cat can hide if they are afraid. Also have a comfortable sleeping spot, bowls for food and water, and their own litter box. Consider putting a calming diffuser in the room, as well as in your cat’s favorite spots. This reproduces cat facial pheromones, lowering their stress levels. You can also have CBD oil ready to sprinkle on their food, helping them feel more relaxed in an otherwise tense situation.

For your resident cat, make sure they have space in your home they currently enjoy. This could be a cat tree, cat shelves, or a spot on the sofa. This will be where your cat feels safe and still in control despite the “intruder” coming into their territory. This will eventually be where they spend time when they want to feel relaxed or safe.

How to Introduce Two Cats

When you bring the new cat home, make sure you make a beeline for their room. There should be no contact with your current kitty. Once the door is shut, place the new cat in a corner of the room or in an area they can hide. Don’t force them to come out. You might even want to give the new cat some alone time to settle down and start exploring the new space.

The next step is to introduce the cats by scent. A blanket or towel your new cat has been using should be placed near your current cat’s favorite space. You may notice your cat getting visibly upset by this, even hissing. If that happens, place it on the floor away from your cat’s food or space, moving it closer to where they eat each day. Meanwhile, give your new cat something with your current cat’s scent, so they can also get used to their smell. 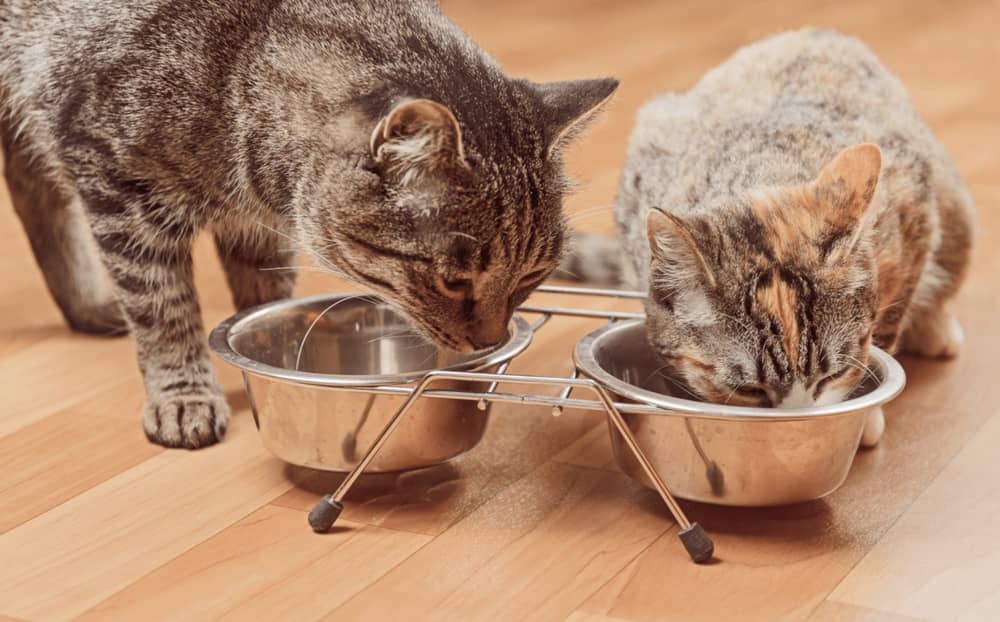 Once they don’t seem overwhelmed by the presence of the other cat’s scent, try swapping their cat food bowls. This could potentially make your cat associate eating — something they definitely like — with the scent of the new cat, and vise versa. If they seem calm after this exchange, you can move to visual contact. This could take just a couple of hours to a few months.

At this point, the new cat should still be in their closed-off room. Open the door and place a screen or baby gate. You can also just open the door slightly so they can see each other without being able to physically interact. Give them cat treats when they’re near each other or encourage them to play with a variety of toys.

When your cats are feeling comfortable around each other, they might start to smell each other or touch noses. If there’s no growling or hissing, you can take the current barrier away. Open the door and let them meet face-to-face.

Remember not to pick them up and force them to go near each other. They will make introductions on their own. They may choose to be far away from each other at first. If the cats start to fight, try making a loud noise that catches them off guard.

When you introduce cats for the first time, it won’t necessarily always go according to plan. They may keep growling and hissing at each other from opposite sides of the screen, meaning you have to separate the cats for longer than expected. They might even swat at each other or chase each other through the house. It’s definitely not an easy time for you or the cats!

But when you take your time and ensure that your cats are comfortable before each step, it’ll be worth it when you see them curled up on the cat tree together or tolerating each other on your bed.

While there are definitely going to be periods of frustration, fear, or stress, there are certain warning signs to look out for that may mean you need additional help from a veterinarian: 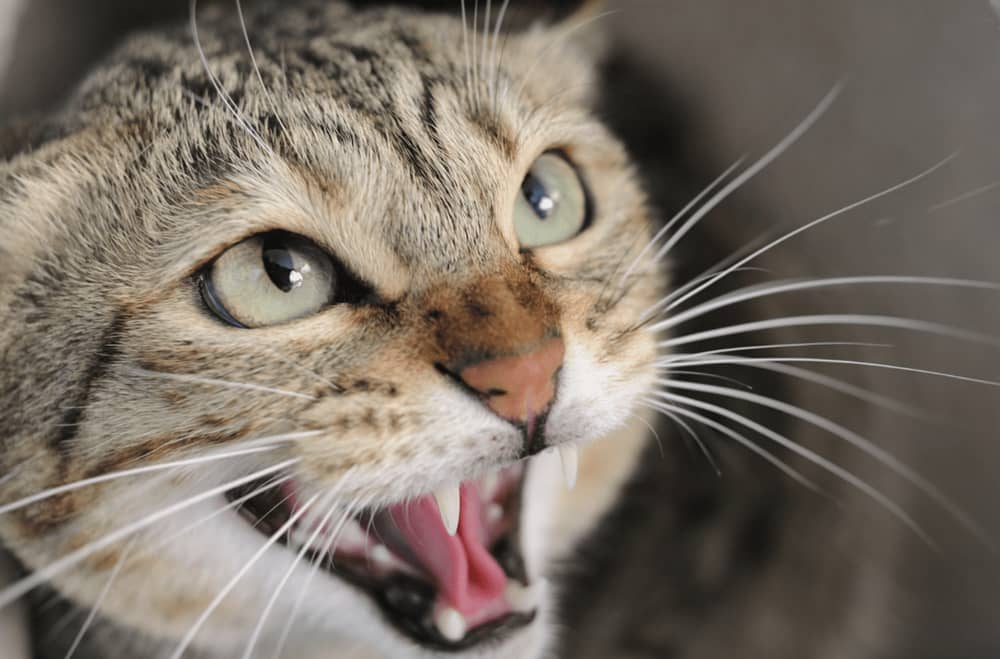 You will probably witness a lot of hissing when you introduce two cats. That’s to be expected, especially at the start of the introduction process. Unlike dogs — who seem to be a bit more expressive — cats can be more difficult to read. They communicate mainly through body language and sometimes it can be a bit subtle.

If your cat is being aggressive, you’ll notice they may be in a straight, stiff stance. Their tail will also be stiff, usually pointed downward. You will also spot the fur along their spine standing on end and their tail becoming a bit fuller. They’ll often directly face the other cat, even staring right at them. They may move towards the other cat, growling or hissing.

You should step in if you notice these extra aggressive behaviors:

A defensive cat — who is more afraid than hoping for a fight — will crouch lower to the ground, their tail possibly tucked in. Their eyes will be wide and their ears will flatten against their head. They’ll turn sideways, not directly facing the other cat. They may even reach out for a quick strike with their claws out, warning the other cat to back off.

Introducing Cats to Each Other Quickly

We’re going to be frank here: You probably won’t be able to introduce two cats to each other quickly, especially if they’re both adults and have had no prior interactions.

If you need to introduce two cats quickly, consider adopting a kitten. Your current cat will not feel as threatened and will be able to maintain their status as the boss of their territory. How to introduce a cat to a kitten still requires you to follow the instructions from above, but the process will move exponentially faster since your current cat — or cats — will make it known pretty quickly that they are not to be messed with.

More often than not, the kitten will be more bothersome than a threat. Make sure that your current cat has their own space just for them when they want to get away from a troublesome kitten. Cat shelves that require a bit more strength and length to get to are ideal since the kitten won’t be able to follow your cat there when it needs a break.

It may not be the most pleasant experience you’ve had — and the cats will most definitely agree. But with the right precautions and process, two cats can be introduced to each other safely and efficiently. Just remember that all cats have different personalities and preferences. Some cats may get along immediately while some will need months to be comfortable around each other. Check out this link.