Looking for a cuddly feline that can’t resist snuggling with you all night? What about a playful kitty that loves racing through the house and even learns to play fetch? How about both! With the Cornish Rex cat, you can have it all!

This is a cat breed that is perfect for every family — as long as you don’t mind some mischief and naughtiness. The intelligent and curious Cornish Rex will most definitely find a way into your heart (and your drawers and cabinets).

The Cornish Rex has quirky looks to match! Its curly, wavy fur is one-of-a-kind —not to mention super soft! But how did such a strange cat become so popular? We have all the history you need, as well as Cornish Rex cat care and nutrition!

On July 21, 1950, a curly-coated kitten was born on a farm in Bodmin Moor, Cornwall, England. The orange and white kitty with the unique fur was named Kallibunker. It wasn’t just his curls that set him apart — Kallibunker was also long and lean, with large ears, a wedge-shaped head, and a thin tail.

Because of the breed’s origins and resemblance to the Astrex rabbit, the breed was called the Cornish Rex. A cat fancier named Fran Blancheri brought two of the unique kittens to North America in 1957. The breed was further developed from there, becoming a popular curiosity in the cat world.

The Cornish Rex is a cat that demands attention — and not just because of its unique looks. The Cornish Rex will do whatever it takes to keep your eyes on them, even if it’s something you might not like! Whether it’s sitting atop your keyboard while you try to type or knocking things off the counter, the cheeky and intelligent Cornish Rex will always find ways to be the center of attention. 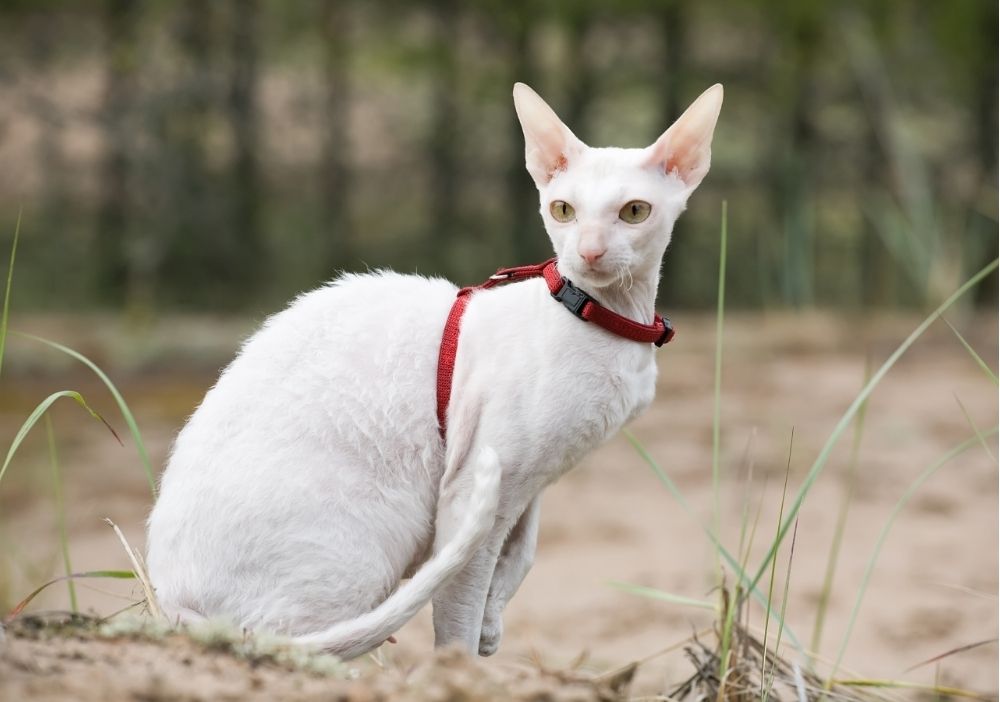 This is a social cat that loves to play with its favorite humans. Agile and quick, the Cornish Rex likes chasing toys down the hall for hours on end, or jumping and flipping for ribbons you shake just above their reach.

The Cornish Rex can even learn to play fetch — but beware: once they learn they might never leave you alone! Toys might have to be hidden after playtime to keep your Cornish Rex from continuing to bug you.

A bored Cornish Rex might use their energy for mischief. Because they are so great at climbing and jumping, no surface is off-limits to this playful breed. They will climb all over your shelves, countertops, and even on top of dressers and bookshelves.

Despite their high-energy personalities, this breed is known to be a great snuggler. They don’t mind being held. You can also find them curled up under the covers, acting as your own personal heating pad.

Weighing six to 10 pounds, the Cornish Rex is a medium-sized cat. Their torso is long and slender, full of graceful arches and curves. Their back is naturally arched, which gives them a tucked-in appearance around the waistline. While thin, this breed is muscular and athletic.

Just like Kallibunker, present-day Cornish Rex have a small and narrow face. Their cheekbones are high and prominent, giving them a well-chiseled look. They have a well-developed and strong chin. Their ears are large. The Cat Fanciers’ Association describes them as “erect and alert.”

The Cornish Rex has large, oval eyes that are slanted upward. The color should match the coat color, although no color requirements are indicated. Instead, the CFA states that the eyes should be clear and intense.

To match their body, Cornish Rex cats have long and slender legs. Their oval paws are dainty. They have five toes in the front and four in the back.

The Cornish Rex has a short coat completely free of guard hairs. Their fur is extremely soft and silky. The dense fur should feature a tight, uniform marcel wave, starting at the top of the head and going across their back and sides — all the way to the tail.

This cat breed can come in all colors and coat patterns. But when it comes to show cats, they can’t have more white “than a locket” or they face a penalty in the calico and bi-color categories.

With proper care and regular vet visits, the Cornish Rex lives an average of 12 to 15 years.

Cornish Rex cats are generally healthy and hardy kitties. To ensure you adopt a healthy Cornish Rex, only adopt from reputable and registered breeders who can provide health guarantees.

While this curly kitty doesn’t have a lot of known hereditary conditions, they carry a lot of diseases common in all domestic cats. This includes hypertrophic cardiomyopathy. This is a heart disease that leaves your cat’s organ struggling to pump blood efficiently.

The Cornish Rex is also known for developing patellar luxation, a condition where the kneecap rides outside the area where the knee usually flexes. Evidence points towards this condition being partially genetic. 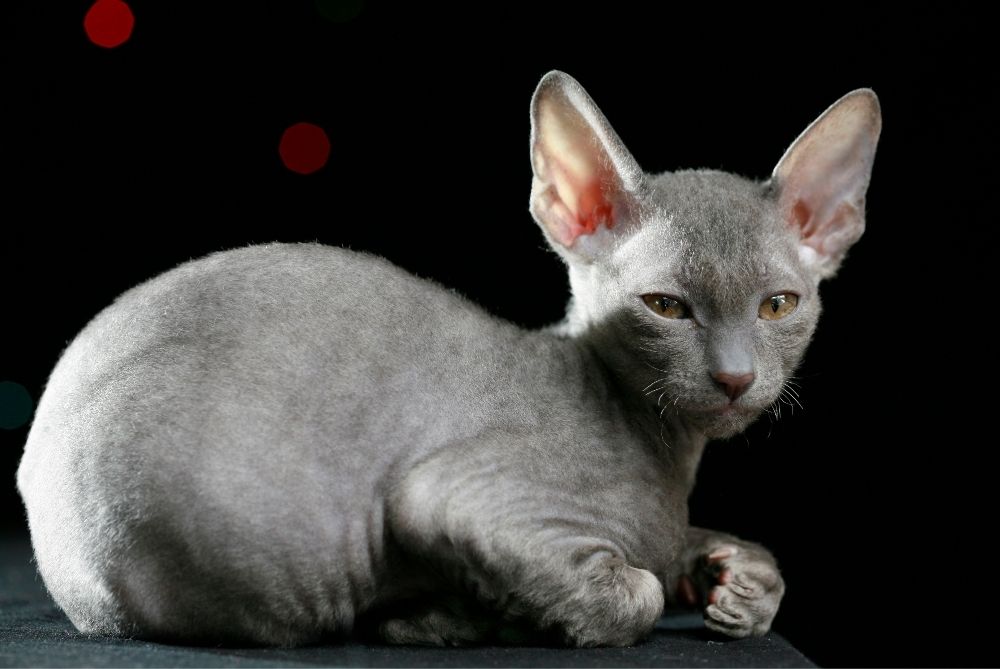 The Cornish Rex has a very thin coat. While this means much less brushing than other breeds, this also means the Cornish Rex is susceptible to getting sunburned. You shouldn’t let your cat stay too long in direct sunlight.

In fact, Cornish Rex cats should be kept entirely indoors. This is a unique-looking breed that might get attention from catnappers. This will also keep them safe from overexposure to the sun, as well as avoid run-ins with dogs, feral cats, predators, and parasites. Keeping a cat inside also ensures that they will not get hit by a car.

Indoors, the Cornish Rex should have access to warm beds and blankets. They can’t regulate heat as well as other breeds due to their thin coat. Providing them with warm, comfy spaces is a must-do to keep this kitty comfortable.

This isn’t a cat that needs much brushing, grooming, and bathing. You always want to be careful when handling their wavy fur, in fact.

Check your Cornish Rex for wax and dirt buildup in the ears. Wipe away anything you see with a lightly dampened cotton swab (should be warm water and vinegar). Trim their nails each week to cut down on the damage they do to your furniture. And brush their teeth daily to avoid dental complications.

The Cornish Rex is naturally thin and svelte. But that doesn’t mean they are immune to becoming overweight. Always check the side of your chosen bag of cat food to see what the proper daily amount should be. If your Cornish Rex begs for more chow, you know they are just full of it! But you can give them a small handful of healthy treats meanwhile.

It’s always important to look for cat food brands with quality ingredients. This includes a named protein source. This should be turkey, chicken, salmon etc. If the first ingredient is “chicken meal” it’s probably not a high-quality brand.

A healthy alternative is wet food. Canned food has no carbohydrates. Instead, it contains over 70% water. Wet food is a great way to give your cat the liquids they need to ensure they don’t become dehydrated.

This is an adaptable cat that is often taken on trips or brought along for RV rides. Their social and easy-going nature makes them great with other animals. While you always want to make sure cats are introduced properly, you can be assured that Cornish Rex cats will love the company once they trust the newcomer.

Their playful side makes this breed a great pal for energetic dogs. They will love playing together. Just make sure to watch their interactions to ensure dogs don’t get too aggressive.

Children will be amused with the Cornish Rex, playing fetch with them for hours. But don’t leave them alone with younger kids. Their fur is quite thin and it can be quite painful and damaging when children pull on it. 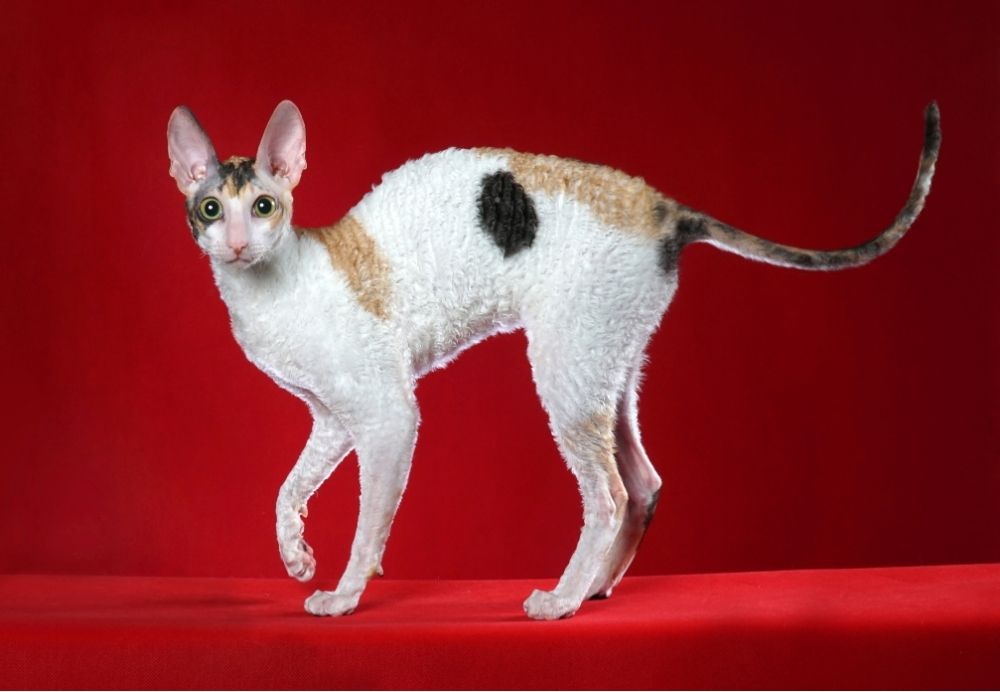 Some people are surprised to learn that this breed isn’t hypoallergenic. While they have less fur, this breed still produces Fel d 1 glycoprotein, which comes from the skin, saliva, and urine. Most people allergic to cats are allergic to this, not fur. Even though you may still sniffle at this kitty, they’re so hard to resist that most cat lovers feel it’s worth it!

The Cornish Rex’s unique coat isn’t only exciting for cat owners. Scientists have also taken a liking to studying this bizarre kitty. Scientists from the Lyons Feline Genetics Research Laboratory recently discovered the recessive mutation responsible for their unique coat. They offer DNA tests to Cornish Rex breeders who want to ensure their cats carry this gene.

This breed can cost up to $1,300. This is a bit pricey, but it’s worth every penny. This is an energetic cat that will immediately insert itself into all aspects of your life. Doing homework? The Cornish Rex will keep your papers warm for you or steal your pen. Playing video games? The Cornish Rex will get in front of the television and playfully bat at the action. Cooking? It might sneak some for themselves when you’re not looking!

This is a cat that loves nothing more than getting your attention — and they have no problem keeping it, thanks to their unique look and over-the-top personality. This is a lovable kitty that will make you laugh all day and cuddle all night.